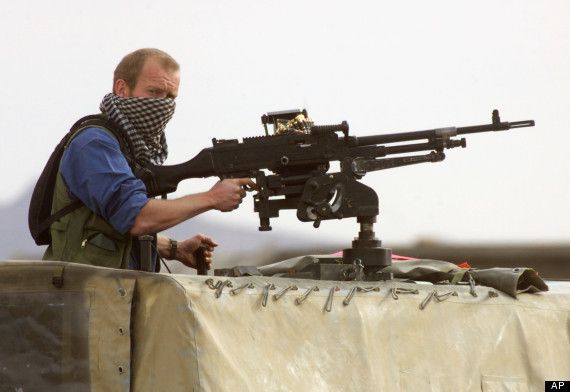 At Reaper Feed we have a huge interest in the War in Afghanistan as some of the Reaper Feed team actively participated in it. So when one of the friends of Reaper Feed wrote a book on the battle of Qala-i-Jangi, one of the most crucial clashes of the early days of the Afghan war alongside the battle of Tora Bora, we decided we had to give it Uprising a book review.

Uprising charts the turmoil that followed the Soviet withdrawal. Defined by civil war, repression, devastation, and crimes against humanity, the 1990s era of Afghanistan was a glimpse at what the country was going to be known as for the next few decades. Largely under Taliban control, the country became a base for al-Qaeda and Osama Bin Laden and following the 9/11 attacks, Afghanistan was in the crosshairs of the US and coalition forces.

However, whilst the world was still in shock following the 9/11 attacks the US and UK were already actively mobilizing for the first steps in revenge. Under operation Jawbreaker, CIA teams were dropped into the critically dangerous mountains of Afghanistan with millions of dollars in cash to buy allegiances in the anti-Taliban Northern Alliance. British Mi6 officers were deployed shortly after to conduct similar operations.

After the CIA, came Mi6 officers as well as a combination of British and US special forces teams. Their role was to pinpoint Taliban and al-Qaeda strongholds in order for the US Air Force to accurately strike them from the air and from the sea. All of this culminated in an infamous fight for control of a prison that became the Qala i Jangi battle, which is where many of the al Qaeda prisoners captured on the battlefields of Afghanistan were kept at and is the central focus of Joel Gallagher’s book: Uprising.

As a fellow security consultant Joel has worked in a variety of conflict zones around the world from the Middle East to the former Soviet Union and as a result, Uprising is a crucial book to connecting the dots from the war in Afghanistan to the rise of ISIS to the war in Donbass.

Through gripping accounts of the people who lived through the battle, Uprising details the gruesome fight for control of Qala-i-Jangi that had been overrun by Taliban prisoners who had subsequently seized a well-stocked armed depot and began a fight to the death against the Afghan Northern Alliance and a contingent of British and American special forces including the secretive Special Boat Service.

Personally, one of my favorite chapters in the book was the ‘A Misguided Marin County Hot-Tubber’ which looked into the curious case of John Walker Lindh. A US citizen who had gone to fight alongside al-Qaeda and the Taliban, John Walker Lindh was pulled out of the mass Taliban bodies alive and taken back to the USA to face trial. In Uprising, Joel puts the case forward that Lindh was a warning of the future that went unheeded in reference to the surge of foreign fighters who flocked to Syria, Iraq, and Ukraine after Lindh. All of their stories ended in tears, just like that of John Walker Lindh.

they saw Dave Tyson sprinting across the courtyard towards them. His black Afghan robe blowing in the wind, his left hand was holding a Glock handgun by the barrel and his right hand was clutching a Kalashnikov assault rifle. As Dave burst through the door of the tower, the correspondents were able to gain an insight into the mayhem that was rapidly unfolding around them.

Another fascinating character covered in the book is Adul Dostum, a warlord who formed his own mini-state near the city of Mazar i Sharif that even featured it’s own airline running out of Mazar airport as well as its own currency. Dostum has survived the war and is a key player in Afghan politics today, despite being surrounded by the controversy of mass murder, corruption, and torture, most recently in the form of raping his political rivals with handguns.

Most importantly, this godsend book is vital for obtaining an understanding of the war in Afghanistan as well as what the future holds after decades of conflict. Will Afghanistan finally see a lasting peace or will the economic fallout from coronavirus plunge it back into war? Time will tell.

Uprising – International Security Lessons from the battle of Qala-i-Jangi is available on Amazon in paperback or on Amazon Kindle for the price of just $8.