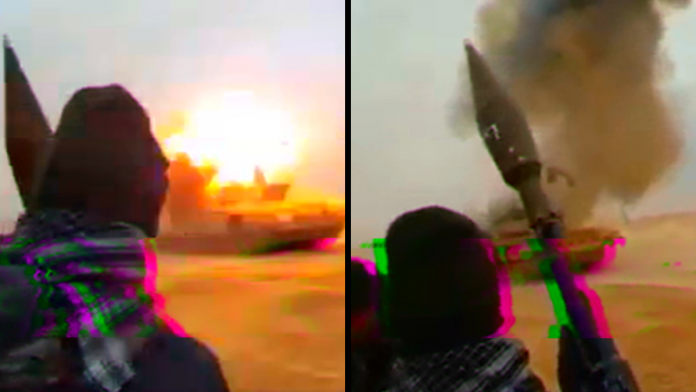 The following combat footage took place near the Syrian city of Palmyra in 2017. During a battle between ISIL and the Syrian Arab Army (SAA), an ISIL anti-tank guided missile strikes a T-72 battle tank of the SAA just a few meters from the cameraman. Luckily, the Explosive Reactive Armor protects the crew, who subsequently fled the tank in a likely state of shock, from a fiery death.

Although the tank itself was saved by destruction thanks to the ERA, there’s a high probability that the crew suffered shrapnel or severe internal injuries, such as concussion, as a result of the blast. In this article, we’re going to delve into Explosive Reactive Armor and find out exactly how this fascinating technology works.

Originally, the concept of explosive reactive armor was created by the Soviets. The idea of utilizing a counter explosion in armor was initially proposed in 1949 by Soviet academician Bogdan Vjacheslavovich Voitsekhovsky who worked at the Scientific Research Institute of Steel. However, due to a range of accidents when testing the prototypes and the belief that Soviet tanks had sufficient armor, research into the technology was suspended.

It resurfaced again in the mid-1970s when the Ministry of the Defensive Industry of the Soviet Union held a contest to find the best tank protection project. The technology impressed and soon became a staple feature of Soviet tanks such as the T-72 and later models.

On the other side of the Iron Curtain, a similar design of reactive armor was created by Manfred Held, a West German researcher working with the Israeli Defence Forces in the late 1960s. Joint research resulted in reactive armor that saw operational use on Israeli tanks during the 1982 Lebanon war and was viewed as being an effective form of protection.

How does Explosive Reactive Armor work?

ERA is most effective in protecting armored vehicles against shaped charges and specially hardened kinetic energy penetrators. It works by reacting to the impact of an explosive weapon by reducing the damage done to the vehicle being protected.

“About 70% of Ukrainian anti-tank missiles are old or even expired. But almost all the Russian armour is reactive – that means boxes of explosives cover the tank, so when a missile hits a box it blows up the missile without harming the tank.”

– Reuben Johnson of Jane’s Defence on the war in Ukraine

Generally, explosive reactive armor is constructed out of a slab of high explosive fitted between two metal plates. When a penetrating weapon strikes the armor, the explosive inside detonates and forcibly pushes the metal plates apart to critically damage the penetrator.

Since its development in the Soviet Union, reactive armor became a highly valued piece of defense equipment. Following the break up of the Soviet Union, the now-independent former Soviet countries ensure that all of their tanks and manufactured to be able to carry ERA technology on the exterior.

Additionally, the U.S. military utilizes reactive armour on its Abrams tanks and Bradly armored fighting vehicles as part of the Tank Urban Survivability Kit (TUSK) package. The Israeli military also use the technology of their U.S. supplied M60 tanks.