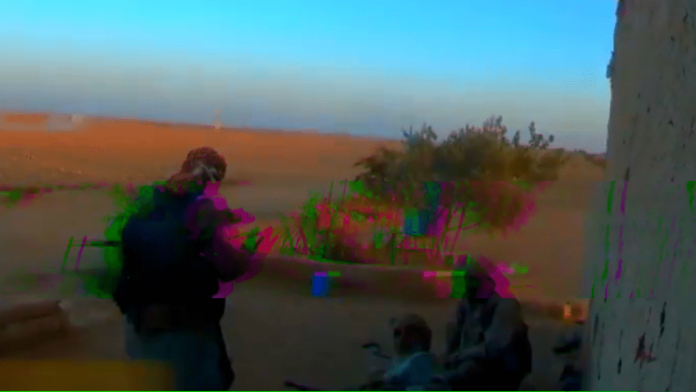 The following combat footage was captured in October of 2017 during the Syrian Civil War. It shows fighters aligned with the group Hayat Tahrir al-Sham (HTS) engaging in a firefight with Daesh militants before soon overrunning them. Please note: the video is NSFW, so please click the screen to play.

The HTS fighters then come face to face with the IS militants and order them to disarm. When they do so, they are cut down in a hail of bullets. The aftermath is a mass of bodies, dust, and tracer rounds.

This is not the first time the ruthless combat tactics of HTS has been captured on camera. A few months ago, we covered the combat footage captured via a drone that saw HTS fighters crush fleeing ISIS militants in a Soviet-era tank, you can check it out here.

The Meaning of HTS & The Story Behind Them

HTS stands for Hay’at Tahrir al-Sham which translates to the “Organization for the Liberation of the Levant” in English. It was founded on the 28th of January, 2017, and can be described as a Sunni Islamist militant group. It is almost exclusively involved n the ongoing war in Syria.

The group was formed as a merger of various Jihadist and Islamist groups active in the Syrian conflict. It saw groups such as Jabhat Fateh al-Sham (formerly al-Nusra Front), the Ansar al-Din Front, Jaysh al-Sunna, Liwa al-Haqq, and the Nour al-Din al-Zenki Movement merge together under the HTS brand.

Following the initial merger of these various groups, HTS quickly began to draw new members. As of 2019, HTS has an estimated 20,000 members. However, there have been numerous accusations that HTS is a covert front for al-Qaeda in Syria.

“HTS is affiliated to al-Qaeda despite its denials. They carry al-Qaeda flags, they practise al-Qaeda methods.”

This is a claim that HTS has denied, however. In a statement, they claimed that the group is an “independent entity and not an extension of previous organizations or factions”. The public allegiance of the group is to the alternative government of the Syrian opposition in Idlib Governorate known as the Syrian Salvation Government.

In 2020, it was said that HTS has now become one of the strongest militant groups in northern Syria. It largely controls Idlib province, including the provincial capital and the border crossing with Turkey at Bab al-Hawa.

From their gunning down of ISIS militants in this video to the infamous video of them crushing Daesh militants in a tank, it’s no secret that Hay’at Tahrir al-Sham is engaged in a war with the Islamic State.

As well as waging war against the forces of the Syrian government, the group has been routinely involved in inter-faction conflicts with other factions involved in the Syrian Civil War ranging from ISIS to the Free Syrian Army. However, its clashes with IS have been some of the most highly publicized.

In September of 2020, HTS claimed responsibility for the death of Yusuf Numan, an Iraqi-born high ranking ISIS official, in North-Western Syria. Numan was the brother of another senior IS official named Hajj Taysir. The latter was killed by a US airstrike in Eastern Syria earlier in the year.

The Reaper Feed combat footage sector functions as a library and resource base for combat footage captured in various conflict zones around the world. It is in no way intended to glorify violence, war, or promote any of the armed groups depicted in the videos. It is strictly educational.