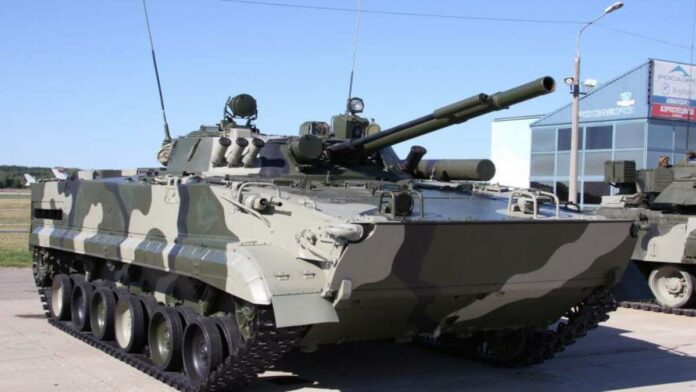 Watching the footage and news from the ongoing war started by the Russian army, I noticed that, in terms of heavy vehicles, both sides use quite outdated, mostly Soviet-made equipment. That is not surprising given that both nations had the largest inventories of Soviet vehicles worldwide. And even though the majority of these devices are much older than Western technology, one vehicle stands out.
Of course, I’m referring to the BMP-3, the final infantry fighting vehicle the Soviet Union produced. It was a significant improvement over any other APC or IFV the USSR had in terms of capabilities and features. The machine’s foundation is actually superior to contemporary western fighting vehicles. However, if the equipment’s tactical and doctrinal uses are not appropriate for the modern battlefield, then the features and numbers are meaningless. And today, this is precisely what is taking place.

Background on BMP and BMP 3

As per usual, it is best to begin with a little background information about the vehicle in order to comprehend how we actually got here.
By putting the BMP-1 into service in 1966, the Soviet Union became the first nation to adopt the modern concept of an infantry fighting vehicle. This vehicle was extremely capable, had adequate armor, and had a very good armament at the time. The BMP with its 73mm 2A28 cannon seemed like a big deal given that the majority of NATO countries would use the M113 and its variants unarmed, with only one machine gun on top.

A couple of years later, the development of a new IFV has commenced. This time, the turret was equipped with more recent ATGMs, so the main gun’s anti-tank capabilities were not immediately necessary. This new 9K111 “Spigot” was usable at any range (unlike the AT-3 Sagger installed on BMP-1, which could be used only between 500 and 2500 meters). Due to the possibility of using a smaller caliber weapon, Soviet engineers chose the 30mm 2A42 auto-cannon. This was yet another excellent choice that would soon serve as an example for many other nations capable of creating their own IFVs.

Things seemed to be okay for a while. The BMP-2 was being produced in large quantities and was widely distributed to motor rifle regiments. The Soviet troops successfully employed IFVs in the Afghan war. Even the armor was reasonable; it could shield the crew from.50 cal and armor-piercing small arms bullets (but only on the frontal armor).
However, it had little to no chance if hit by an RPG. RPGs were becoming more and more common both in Afghanistan and worldwide. Additional steel sheets were installed on the sides of the vehicle to provide greater protection. The unofficial name of this new modification was BMP-2D. Due to the additional weight, it was no longer amphibious, but this was unnecessary for the war in Afghanistan. In retrospect, this was a really smart modification that ought to have been implemented at the official level. But it wasn’t given the proper attention, just like many other things in the Soviet army.

Work on BMP-3 began before BMP-2 was adopted. While developing the idea for a new vehicle, engineers discovered that both main guns, the 73mm and the 30mm, have advantages. The original plan was to use a 2A42 regular gun along with a longer 73mm gun. Even though it was possible to fit both cannons into the BMP-2 turret, the ministry of defense insisted that the turret be large enough to accommodate both the gunner and the vehicle commander.

BMP-1 and BMP-2, however, could not be used for such a concept because they were both rather small even for the 1970s. A novel design concept was necessary. Engineers from the Kurganskyy vehicle factory have used an older concept called “Object 685” to satisfy all of the MoD’s requirements. It was designed to replace the now-outdated PT-76 swimming tank, but the Soviet Army was unable to adapt it due to its complexity and high cost.
Now that it was a larger vehicle, it could accommodate everything the Ministry of Defense wanted.

More on the BMP-3’s armament

First, it was decided to increase the main gun’s caliber to 100mm in order to enable ATGM launching. This required the development of a new cannon with strict weight restrictions because the goal of maintaining vehicle ambitiousness remained. This cannon, later known as 2A70, was developed personally by Vasiliy Gryazev.

He was a licensed engineer who had spent the majority of his career developing various armaments for the air force, where weight is obviously important. He was also the brains behind the new 2A72 30mm auto-cannon. This gun, which in theory differed from the BMP-2 cannon in that it had a different push-back mechanism that smoothed and prolonged the push-back, made it possible to use it on vehicles like the BMP-3, BMD-4, and BTR-82 without turret damage or turning the vehicle over.

How does the BMP-3 excel as a vehicle?

The BMP-3 proved to be a very capable vehicle. Most importantly, it has enough weapons to wipe out half the city. It is fast, agile, and has the contraversial ability to swim. The main weapons are excellent. While the 30mm autocannon can deal significant damage to any other targets, such as basic infantry defense lines and light cars (though the 30mm autocannon is powerful enough to destroy a tank, but more on that in the next article), the 100mm cannon can effectively combat heavy armor and concrete defense structures.
Compared to the BMP-1 and BMP-2, the armor on the vehicle is much thicker and better. Although there was still room for improvement, the Soviets’ choice to keep the amphibious vehicle had drawbacks.

Comparing its current use to its ideal use

Despite being a really good infantry fighting vehicle, all three BMPs are still used similarly in doctrine and strategy; to the military, it is just another infantry carrying vehicle. If there had been enough of these vehicles for every infantry section in the armed forces to have one, this might have gone somewhat better. The reality, however, is frequently disappointing, and it doesn’t appear that the Russian armed forces were able to acquire more than 600 of these, given the economic climate over the previous 30 years. And it is confirmed today that at least 25% of the pre-war stock was lost.

It is absurd to use the BMP-3 as a personnel carrier, neither for the Russian military nor specifically for BMP-type vehicles. The troop compartments on the BMP-1 and BMP-2 are incredibly small. They were created more than 50 years ago, when the standard human height was about 5 to 6 cm shorter. On top of that, as we covered in our previous article, Soviet soldiers did not carry a lot of equipment with them. A typical infantryman in 2022 will be 180 cm tall, outfitted in body armor, a patrol rucksack, and a hand-held grenade launcher. It’s difficult to get him into a BMP. But unlike BMP-3, which has some strange “trench-like” dismounting system, BMP-1/2 both have a reasonable back door.

After all that, the BMP-3 should have been utilized as a light tank exclusively, rather than serving as a stand-in for the IFV and APC. In order to function effectively in their original role as infantry support, modern battle tanks are far too heavy and have a small ammo capacity. A light tank with very good armament, like the BMP-3, can excel in this function. It would be possible to carry more ammunition for the two main guns and three machine guns by reducing the troop compartment.

Additionally, it makes sense to add more armor in order to protect the vehicle from evolving anti-material threats by removing amphibious capabilities. The UAVs are the only contemporary obstacle that is significantly more difficult for a vehicle of this size and significance to overcome. The real issue is how to defend the sky above the vehicle given that even a civilian grade Mavic can carry an 82mm mine or LAW type grenade launcher and shoot both with incredibly high precision.
If you want more information on BMP-3 I advise to visit our partner website – Special Ops.

For the conclusion, I propose you to watch this Ukrainian video of a captured BMP-3. There are no subtitles, but the inside of the vehicle is well shown.