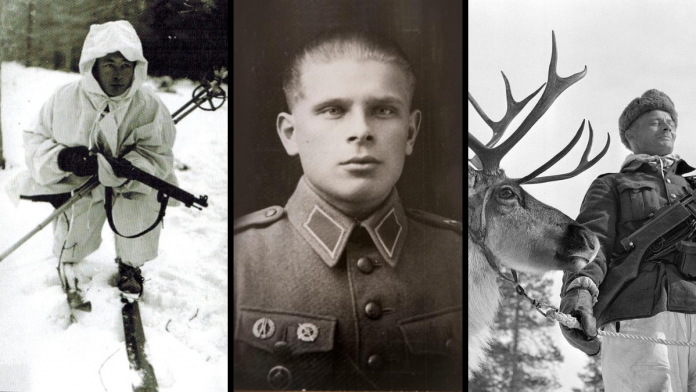 We need to talk about Aimo Koivunen. When I first heard this story, I knew it had to appear on Reaper Feed. It’s a story of fleeing Soviet troops in inhospitable terrain, consuming 30x the dose of military-grade meth, stepping on landmines, and surviving against all odds to be able to tell the tale.

Finland is a ‘unique’ country to say the least. It piqued my curiosity a number of years ago when I had a conversation with a Swede who was a quarter Finnish. He told me that there are villages in the far North of Finland totally forgotten and isolated since WW2.

He informed me that in such villages if you’re a German or Russian passing through and you find yourself broken down there, the locals will drown you in a swamp rather than help you. Oddly, I couldn’t find anything about this on the country’s tourist board.

In 1939, Finland went to war with the might of the Soviet Union in what became known as The Winter War. What should have been a short war and a swift Soviet victory, turned into a blood-soaked fight to the death across the freezing wastes of Finland.

Whilst the Soviets had a seemingly endless amount of conscripts, weapons, and equipment (remember, this was before WW2 in the Soviet Union) the Finnish knew their own terrain like the back of their hand and utilized mobile troops on skis to fight the Soviets in a form of guerilla warfare.

These hit and run attacks combined with the exemplary sniper skills of people like Simo ‘the White Death’ Häyhä who single-handedly killed over 500 enemy troops, struck fear into the Soviet Army ranks. The fighting turned nasty very quick, with frozen corpses turned upside down and used as signposts, summary executions and atrocities being widespread on both sides.

Despite their successes, the small country of Finland couldn’t keep this war up forever and by 1940 they were forced to the table with the Soviets where a peace treaty was signed that handed over 11% of Finnish territory to the Soviet Union.

However, this was only to prove temporary as Operation Barbarossa kicked off the following year and 4 million troops of the Third Reich flooded into the Soviet Union. Finland saw a clear opportunity, joined forces with the Third Reich, and launched a surprise attack into the now chaotic Soviet Army to take back their lost territory with assistance from the Germans as the Soviets were preoccupied with fighting the Nazi forces.

But by 1944, the Second World War had shifted entirely and Germany was on the grim road of defeat back to Berlin. In contrast to the 1930s, the forces of the Soviet Union were now battle-hardened and seemingly unstoppable. The Soviets also hadn’t forgotten Finland or their alliance with the Nazis and were soon launching round two of their seizure of the country.

Finland was now in a dire position and it was highly unlikely they could withstand the Red Army. Despite this, many Finns continued to wage war against the might of the Soviet Red Army. One of these Finnish men was 27-year old ski trooper Aimo Koivunen.

On a freezing winters day, Aimo Koivunen was out on a ski patrol with his unit. They had been trekking for over three days when they came under sustained fire from a superior force of Soviet soldiers. They pulled off an escape using their skis and fled for their lives.

After the exhaustion of three days of patrolling, Aimo Koivunen struggled to keep up with his comrades. But Koivunen had also been tasked with being in charge of the unit’s stash of military-grade Pervitin, which was the 1930s version of crystal meth in the form of a tablet and issued to allow soldiers to stay awake and alert whilst on duty.

In the panic of facing capture by the Soviets, Aimo Koivunen consumed the entire box of Pervitin as he couldn’t pull out single pills due to wearing heavy cold weather gloves. The safe dose was one or two pills a day but Koivunen had just swallowed over thirty and Finland’s first and last military-grade meth head was about to be unleashed.

In the minutes following, Aimo Koivunen tripped out and started to see into the beyond before he completely passed out and was abandoned by his men. He woke up the next day in a ditch without any food or supplies and a unit of Soviet troops not far behind.

Most men would accept their life is over but Koivunen was Finnish, and also still high on a hell of a lot of methamphetamines, so he picked up his skis and prepared to move. In the next few days, he began a seemingly impossible expedition of over 250 miles of inhospitable terrain back to safety. On the way, he came across Soviet soldiers again who were possibly the same ones he was initially fleeing, but Koivunen managed to outrun them on his skis and meth.

Whilst on this arduous journey, Aimo Koivunen managed to survive despite sleeping in sub-zero temperatures with little shelter. For food, he got by mostly on pine buds except for one day when he fancied a treat and caught a single Siberian jay that he devoured raw in meth fuelled rage. The poor bird probably didn’t know what hit it.

Further on in the extreme journey, Almo Kolvunen stepped on a landmine which tore his leg apart and threw him into a ditch. He lay there for a week before dragging his mutilated body to allied lines where he was rescued by Finnish troops and evacuated to a hospital.

At the hospital, Aimo Koivunen weighed in at 94 pounds and his meth fuelled heart was beating at over double the normal rate at 200 BPM. Despite this, death continued to ignore this crazy Finn once more as Aimo Koivunen survived to make a full recovery. He would live until the grand age of 71 before passing away in 1989. We assume he never took methamphetamine again as he’d consumed enough for one lifetime.

In September 1944, Finland decided to cut its losses and signed an armistice with the Soviets on the condition that they would return the territory handed to the Soviets in 1939, disband the Finnish military and pay war reparations. Whilst it may seem a bad deal, this was the best deal you could get when facing the might of the Soviet Union in 1945 and it worked in everybody’s favor. Finland had been spared Soviet occupation for the next few decades as was the case of neighboring Estonia. Russia now didn’t have to worry about the scary entity that was an angry Finn.

This was an overview of the incredible story of Aimo Koivunen, to hear the story relayed in his own words, check out our article translating a Finnish article Kouvunen wrote himself after WW2. Also, if you haven’t seen the Aimo Koivunen GIF then I highly suggest you check it out on the Reddit thread above.