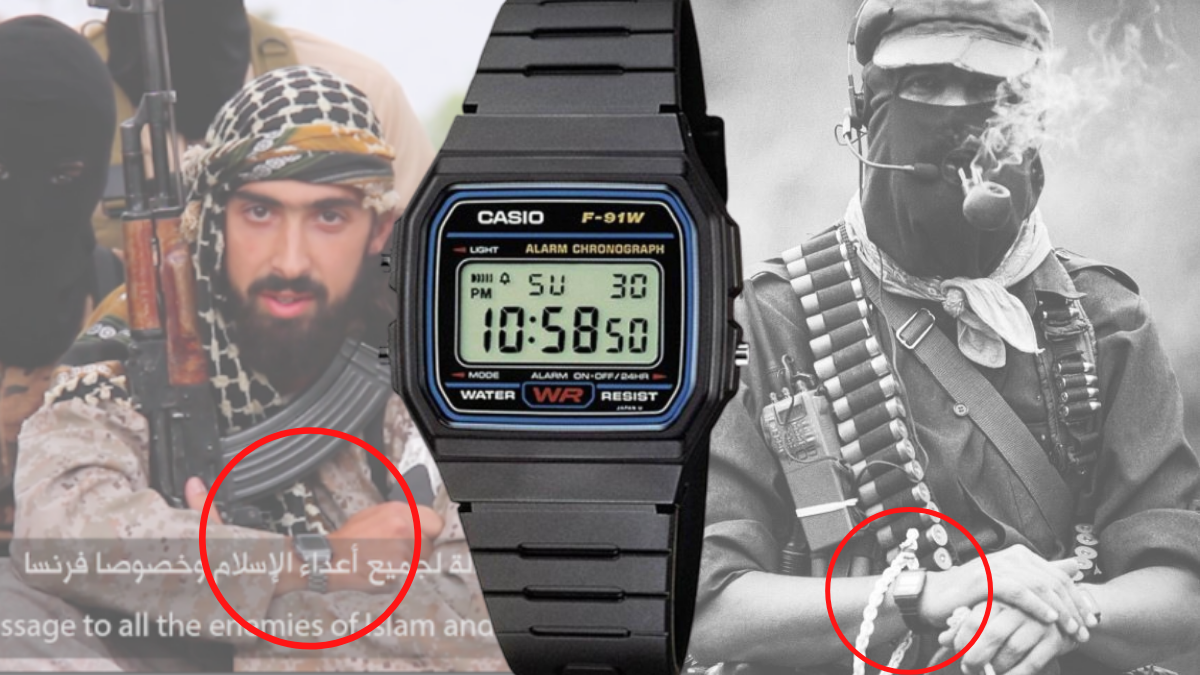 This article is available in video format on YouTube.

The humble Casio F91W has been an iconic watch since it was first made in Japan back in 1989. Upon its release, it was sold for around $20 making it one of the world’s first affordable digital watches. Today, Casio still produces over 3 million of the F91W every year. The prevalence of this iconic timepiece through the years means it’s likely you’ve worn one at some point. If you have, then it’s probably the only thing you have in common with Osama bin Laden, Chechen militants, and Napoleon Dynamite. Congratulations!

As a kid in school, I personally remember being told off for talking in the back of the class. I had been caught excitedly telling my friends that I had just figured out what kind of watch the most wanted man on earth, Osama bin Laden, wears. As punishment, I was called up to answer the maths question on the board, at which I failed miserably. ”You need to focus on what matters! You can’t solve maths problems but you can tell everyone about the watches worn by terrorists?” screamed my teacher. Looking back, I feel I prioritized the right kind of knowledge.

The Casio F91W was designed by Ryusuke Moriai which he described as “small, flat and simple”. The watch features a seven-segment numerical display on a grey LCD screen. Water-resistant, extremely durable and accurate to within 30 seconds a month, it’s a tried and tested piece of kit.

If there’s one thing that’s to be said for international terrorists, they know a thing or two about choosing reliable products for waging war. The F-91W joined the ranks of other terrorist accessories like the Kalashnikov and the Toyota technical because it’s seriously cheap, solid, and reliable. Oh, and it also doubles as a bombmaking accessory which we’ll look into later.

Whilst Casio has advanced further into combat watches through its iconic Casio G-Shock range, the F91W has remained the true battlefield accessory throughout modern warfare. Aside from iconic weapons, the Casio F-91W is the only branded accessory that Osama bin Laden was ever seen wearing in the open. Al-Qaeda was reported to hand the watches out to recruits at their terror training camps across Afghanistan and Pakistan throughout the 1990s and early 2000s. Thus, it was al-Qaeda and bin Laden who arguably started the terrorist trend surrounding the watch.

During the height of the War on Terror, it didn’t take long for the US government to spot the prevalence of the Casio F91W amongst terrorists. In 2011, Wikileaks released a document labeled the “Matrix of Threat Indicators for Enemy Combatants” which was intended to assist staff at Guantanamo decide which detainees are more likely to carry out suicide attacks. According to the document, owning an F-91W was the biggest giveaway of a serious terror suspect alongside ownership of a satellite phone, a radio transceiver, or large quantities of cash.

However, this wasn’t just paranoia. Statistics in other similar documents released by Wikileaks revealed that around a third of inmates being held at Guantanamo that were captured whilst wearing an F-91W had a known correlation with explosives. The F-91W watch came up almost 150 times in the piles of leaked Guantanamo prisoner assessments. Ironically, four of the chaplains who worked at Guantanimo Bay also wore the watch.

One of the detainees at Guantanamo was grilled over the prevalence of the watch amongst suspected terrorists. He claimed that the water-resistant feature of the F91W watch was handy due to the Islamic requirement for followers to wash up to their elbows before prayers. Innocent enough explanation, right? Well not really. Interrogators smelled a rat when another prisoner claimed the prevalence of the watch amongst Jihadi inmates was simply due to the built-in compass that helped them pray towards Mecca. However, there is no compass in the F91W.

Despite the fairly frosty relationship between the two, ISIS didn’t let it get in between their choice of a good wristwatch. The F-91W was a feature of various ISIS militants including Tunisian born Tariq al-Harzi who was a high ranking Emir of the Islamic State. It was also worn by Kevin Chassin who was a French-born Jihadist who went to Syria to join ISIS. He was subsequently utilized for his high propaganda value in ISIS videos.

However, the leader of ISIS Abu Bakr al-Baghdadi wasn’t so fond of the cheap Casio F91W. Instead, al-Baghdadi opted for a flashy watch that sparked debate over the exact model. The watch was spotted during his infamous speech in Mosul that declared the formation of the so-called Caliphate. It was believed to be either a Rolex or an Omega Seamaster, both of which run north of $3,000 and contradict the contents of his speech as well as his ideals.

It’s not just Jihadist terrorist groups that wear the watch. Introducing Subcomandante Marcos who, until recently, led the Zapatista National Liberation Army (EZLN) in Mexico. The photogenic insurgent leader was pictured in an iconic photo on horseback while smoking a pipe and wearing, you guessed it!

Of course, the watch is not only appreciated by the terrorists of the world but likewise by the people who combat them. Various fighting forces across the Middle East have been seen using the watch. Such as the Syrian Democratic Forces which is a coalition waging an anti-ISIS campaign across war-torn Syria.

How the Casio F91W Became a Bomb Makers Accessory

The Casio F91W is not only the terrorist’s timepiece of choice due to its ruggedness and reliability. Due to its long-lead timer, it also doubles as a bomb-making accessory for various terror groups around the world from Afghanistan to Chechnya. Deadly usage of the watch has been well documented through various case studies.

According to US intelligence officials, the watch doubles as a bomb timer as its alarm can be set beyond a 24-hour period. During the War on Terror, Pakistani ISI officials found more than 600 of the watches in a terrorist safe house in Karachi which led to a period of anybody being found wearing an F91W watch to be liable for arrest and questioning. However, with the watch being available for $4 dollars on Pakistani markets, simply possessing a Casio watch doesn’t prove anything and this tactic of arrest was soon dropped.

In September 1999, a series of bombs were detonated inside four Russian apartment buildings in the cities of Moscow, Volgodonsk, and Buinaksk. The blasts killed 367 people and injured over 1,000 others. Russian investigators concluded that the attackers had been trained in terror camps being run by Ibn al-Khattab inside Chechnya which had recently gained unstable independence following the First Chechen War.

Investigations carried out inside Chechnya discovered that the bombs used in the attacks were comprised of ammonium nitrate and aluminum powder, with plastic serving as an intermediate explosive. The detonator? A combination of a Krona battery and a Casio F-91W.

“about a third of inmates at JTF-GTMO [the unit in charge of Guantanamo] who were captured wearing one of these watches had a known correlation with explosives”.

In 1994, an al-Qaeda militant named Ramzi Yousef used the Casio F-91W as a 4-hour timer on the bomb he constructed in an airplane toilet of Philippine Airlines Flight 434. He proceeded to leave his deadly work under the seat before leaving the plane. It detonated on the next flight, killing a Japanese businessman named Haruki Ikegami who sat in Yousef’s seat. Thankfully, the bomb’s orientation caused the energy to be mostly absorbed by Ikegami. Thus other passengers and the plane were not catastrophically damaged.

So, to round off this article I feel it’s fitting to make a comparison between Ryusuke Moriai and Mikhail Kalashnikov. Just like when Kalashnikov designed the AK47 intended solely for the defense of his motherland, the innovative inventor Ryusuke Moriai could never have predicted that his creation would go on an unstoppable path of its own and be used for far more sinister purposes than ever intended. Mr. Moriai had unwittingly created a watch ideal for modern warfare.

I was hoping to find a profound statement from Casio on the watch being used for deadly means by some pretty evil people. I was looking for something similar to what Kalashnikov said about the violent impact of his life’s work. The Guardian approached the PR department for Casio hoping for a similar statement on the widespread use of the F-91W amongst global terrorists. But they just received a blunt email stating: “Casio is not making any further comment on the F-91W watch at this point in time.” Damn.

To gain access to our premium content with a range of bonuses and gifts sent out to you each month, consider supporting us on Patreon. This also means you’ll be supporting our work and helping us to run the site, which we appreciate a lot.