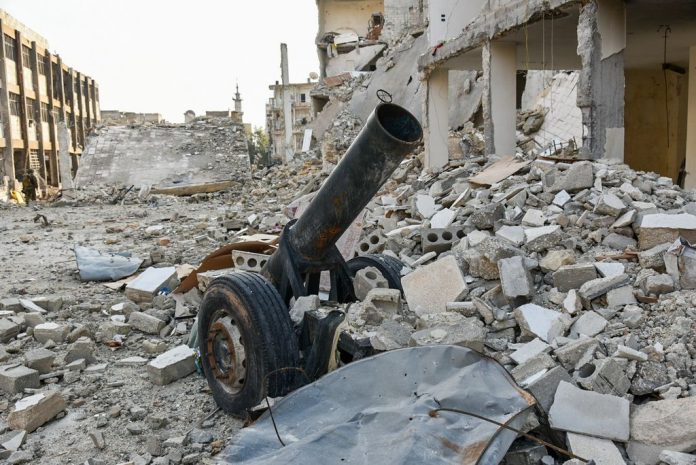 The following combat footage shows a Hellcannon belonging to the Free Syrian Army being used against a government position during the Battle of Aleppo. A few seconds after impact the building succumbs to the force of the blast and collapses. A Hellcannon belongs to the family of Improvised artillery being used in the Syrian Civil War almost entirely by Syrian opposition forces.

Known as the Jahannam (Hell) in Arabic, the Hellcannon was first produced by insurgents belonging to Ahrar Al-Shamal Brigade back in 2012. Initially, the manufacture of the weapon took place at a plant in the Syrian town of Binnish but later moved to Aleppo where various manufacturing and engineering businesses were repurposed for production of the weapon.

The hell cannon was largely used during the urban warfare of the Battle of Aleppo. The medium-range capability of the Hellcannon (about 1.5 kilometers) requires the target to be nearby. The Hell Cannon is unarmored and is vulnerable in the open spaces and rural areas, hence why it was well suited to urban warfare where a combination of close-quarter fighting and the ability to hide behind buildings, walls, and other structures gave it a huge advantage.

The Hellcannon barrel is about 3 feet long. The weapon is mounted on wheels and towed. It is muzzle-loaded. Explosive powder such as ammonium nitrate is first dropped into the muzzle and tamped with a wooden stick.

Like in the video, the projectile is usually a re-purposed gas cylinder full of explosives and shrapnel. Welded to the payload is about a 2-foot metal tube around the same circumference as the cannon’s muzzle. The full length of the tail is inserted into the muzzle, forming a tight seal inside the cannon. The payload remains outside the muzzle but still attached to the tail now inside the cannon. When the cannon is fired, the force of the explosion takes the path of least resistance pushing the projectile towards the target at high velocity. Flight stabilizing fins that are part of the tail ensemble ensure the cylinder doesn’t tumble.