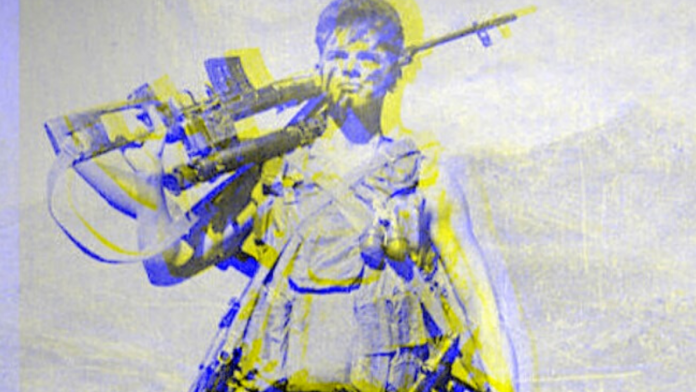 “Remember, Sully, when I promised to kill you last? I lied.” When it comes to movies, Arnold Schwarzenegger’s Commando is one of my all-time favorites. When it comes to conflicts of centuries gone by, the Soviet-Afghan War is one of my most intense areas of study. So when I came across this incredible image of a Soviet soldier mimicking the iconic Arnie pose from Commando, I was content at having found the peak Arnold Schwarzenegger look alike that combined two of my favorite things in life.

Not much is known about this photograph, such as who the soldier is or exactly when it was taken, but from the weapons being carried in the Commando pose and terrain in the background, it’s easy to see that it was taken sometime during the Soviet-Afghan War sometime after 1985 when the iconic movie Commando was released in US cinemas.

The Soviet soldier in the photo is carrying *deep breath* a Dragunov Sniper Rifle, an AK47 with a GP-25 grenade launcher attached, an RPG, a bag of rockets, 2 RDG-5 hand grenades, a Kalashnikov bayonet, and finally, an SPSh-44 flare gun. Put all of these ingredients together and you have the most epic Arnold Schwarzenegger look alike to have ever existed!

The Soviet soldier in the picture is mimicking the iconic ”gear up” scene in Commando, which follows a haphazard raid on a gun store in Santa Barbara. The full list of weapons carried by Arnie in Commando is simply eye-watering. Sorry Soviet Arnold Schwarzenegger look alike, it was a great try, but you didn’t come close to Arnie’s full arsenal!

Some of you may be wondering how this Russian Arnold Schwarzenegger look alike gained access to American movies like Commando in the tightly controlled Soviet Union. Well, around the exact time that Commando was released, the Soviet Union was going through an era known as Perestroika. This was an era that saw a series of policy reforms in the USSR and its eventual downfall. Most importantly to this article, Perestroika saw a relaxation of the infamous censorship of earlier eras in the USSR, and smuggled movies like Commando were increasingly easy to obtain.

You know when I was a boy and rock’n’roll came to East Germany, the communists said it was subversive.

Throughout the late 1980s and the post-Soviet 1990s, western movies flooded the territories, and subsequently independent nations, of the Soviet Union. Most prominent were action movies of the era. These were a favorite amongst general citizens as well as the gangster class and warlords that rose to prominence in the 1990s.

A prime example of this is Ramzan Kadyrov, the current infamous president of the recently war-torn Russian republic of Chechnya. In honor of his various birthdays, he’s been known to pay vast sums of cash to obtain the company of his teenage heroes of Jean-Claude Van Damme, Steven Seagal, and other Hollywood action movie heroes. Mike Tyson also made an appearance, but that’s another story.

The mimicking of Western movie icons of the 1980s and 1990s was not just limited to this Arnold Schwarzenegger look alike. In fact, there are various examples that can be found from the latter years of the USSR that show similar Western influences on the dying days of the Soviet Union.

Take this picture of the iconic Russian rockstar Viktor Tsoi whose style here is arguably influenced by the great Bruce Lee. Tsoi was an extremely talented Russian singer whose music truly captured the melancholy feeling of the Soviet population as their world collapsed around him. He was killed in a car crash in 1990 and his tragic death led to some of his fans committing suicide. I highly suggest you check out his music.