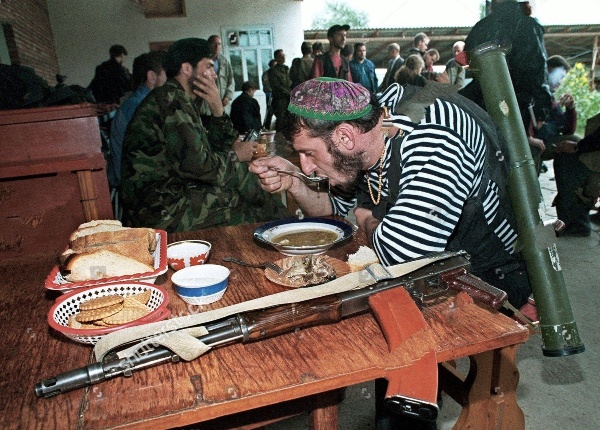 Since the mid-1990s to around 2011, the Republic of Chechnya in Russia’s North Caucasus was locked in two wars that saw the Russian military fight a grueling battle against separatist fighters and later Islamic Jihadist groups led by warlords like Shamil Basayev.

The bloodshed was catastrophic and hundreds of thousands were killed and displaced. Despite major improvements to the security situation in Chechnya, major western brands such as Mcdonald’s, KFC, Starbucks, and Burger King, refuse to open up shop in the republic, leading to the ever-resourceful Chechens to take matters into their own hands and make their own fake fast food restaurants!

Throughout the year alongside the team at Soviet Wastelands, we run a number of private and group tours to Chechnya and the wider North Caucasus region such as South Ossetia, Dagestan, and Abkhazia. Alongside the variety of bizarre sights in a tightly controlled Republic, a popular and unexpected range of sights on our city Tours in Chechnya consist of the many fake fast food restaurants that are an audacious rip off of western brands. In this article, we’re going to break down five of our favorites seen on our City Tours in Chechnya!

Personally, I have no love for Starbucks. I find their coffee awful and overpriced to boot. But when I saw this knock-off Starbucks called Star Coffee at the end of Vladimir Putin Boulevard in Grozny (yes, it’s really called that) I had to try it. The coffee, unlike my experience in Starbucks, was damn good and served by friendly Chechen locals who were curious to speak to foreigners. A large latte only set me back $1!

I’m a McDonald’s fan, so when I saw this audacious example of fake fast food restaurants and knock-off of the biggest fast-food chain on earth I joined the large queue to give it a try. Ironically more expensive than Mcdonalds, I gave their iconic ‘Mac Mac’ a try: the Big Mac so good they named it twice! It was basically two Big Macs stacked on top of each other. A heart attack in a bun that was just incredible!

Although not one of the fake fast food restaurants, I felt this was worth a mention. Whilst taking a stroll through one of Grozny’s many parks (reconstruction after the war resulted in wide-open spaces being formed from demolished buildings) I stopped for a soft drink at one of the local kiosks run by a friendly group of kids. Now, Coca Cola and related brands are not hard to find in Chechnya but for some reason, fakes are still around.

After a few sips of my recently acquired beverage, I noticed the coca-cola was definitely lacking something. On inspecting the label, I found that the coca was missing from the otherwise correct logo. I’d been duped! It reminded me of the story of North Korean coke from the Street Food Guy.

As you’ve probably already guessed, Mcdonald’s is the main inspiration of fake fast food restaurants in Chechnya. After I’d sampled the fine dining of double-decker Big Macs at McDowell’s, I was waddling back to my hotel down a different street when I noticed another Mcdonald’s rip off: Makovski!

Rather than ‘I’m loving it’ their motto was ‘I need it!’. Despite having already taken 5 years off the lifespan of my heart earlier in the evening, I felt that ‘I needed’ to try this establishment also and went in to sample some of their chicken nuggets and again, was pleasantly surprised.

1. I don’t know how to describe this beast.

Stealing the place at number 1 of the Chechen fake fast food restaurants is… I really don’t know. I drove past this on the way to the train station and demanded we stop to take a photo. Not only had this small fast food kiosk attracted customers in the rain, but it was also audacious enough to flaunt two major fast-food logos on its roof. I asked the driver what it sold and he said ‘mainly milkshakes’ adding more mystery to this bold eatery.