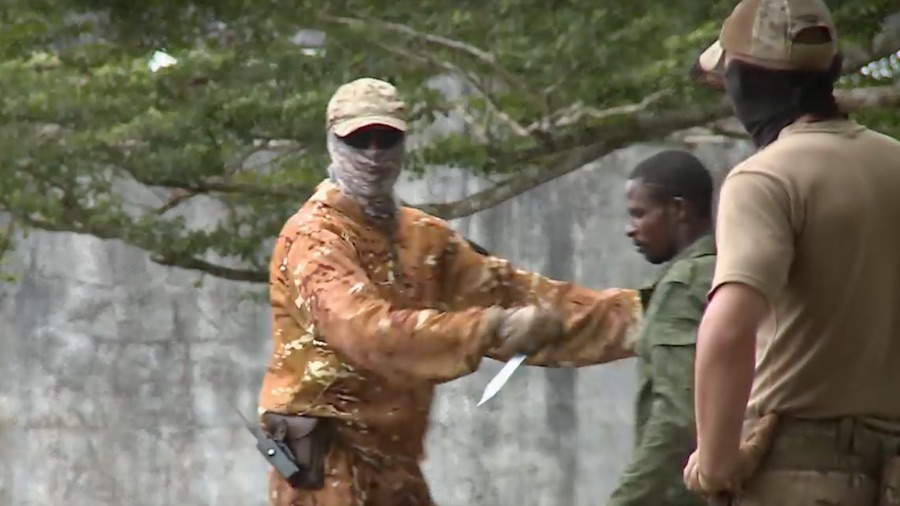 Wagner Group mercenaries have been seen in conflict zones like Ukraine, Syria, and Libya. However, one of the most recent ventures of the infamous Wagner mercenaries has taken place in the war-torn Central African Republic.

H/T for this article goes to Funker530.

Home to a vast plethora of minerals and resources, the deeply divided Central African Republic is currently gripped by civil war. Sectarianism combined with relentless fighting between various militias has resulted in one of the worst humanitarian crises’ this former colony of France has seen.

As most people try their best to escape the failing state, Russia is going in. The Russian Federation has deployed men through the same tactic as used in Ukraine and Syria. Under the guide of ‘military advisors’ which are arming and training armed factions in the CAR.

When the French were in the CAR they too tried to do the same but were blocked by limitations slapped on the operation by the EU which included a ban on arming local troops in the CAR with weapons.

The following documentary was made by Al Jazeera in the field features an interview with a former official of Russia’s intelligence services, Valery Zakharov, who describes the Russian men in the video as simple “reservists”. However, the reality is more than likely that these masked and highly trained figures are Wagner Group mercenaries.

Luckily for Russia, the rules of the EU do not apply. Thus the Russian arrivals are permitted to give Russian weapons to the military of the CAR. In exchange, it’s highly likely that the much sought after natural resources of the Central African Republic are handed over to the Russians.

In regards to the Russian government and Wagner Group, this operation is an absolute win-win situation economically. As long as logistics are handled well, not only does the flow of Russian guns into the CAR keep Russian weapons manufacturers very busy, it also means resources along the lines of gold, diamonds, uranium, and oil will be arriving into Russian in vast quantities.

Of course, Russia is not the only country to utilize private military companies (PMC). Western governments such as the USA have also deployed them in conflicts from Iraq to Libya. In this video by Funker530, American and Italian mercenaries can be seen embedded alongside fighters of the Government of National Accord or GNA. The non-official status of mercenary groups like Wagner allows troop deployments, deaths, and operations to be kept from the public.

What is the Wagner Group?

Out of all of the modern mercenary companies, Wagner Group is arguably the most secretive and sinister group. Wagner PMC was founded back in 2014 and is now suspected to be headed by a powerful Russian businessman named Yevgeny Prigozhin, who is believed to have links to the Kremlin.

Wagner was founded by a former decorated Russian Spetznaz officer named Dmitriy Utkin whose military callsign was Wagner. The mercenary group set up offices in Russia, Hong Kong, and Argentina.

As the Ukrainian regions of Donetsk and Lugansk erupted into civil war shortly after, Wagner men saw their first bought of action as they fought alongside Russian separatists against Ukrainian forces in various battles, including the battle for Donetsk airport. Utkin was reportedly wounded in Donetsk when he was hit in the liver by shrapnel. As Russia began its deployment to Syria, Wagner withdrew from Ukraine in 2015.

Wagner mercenaries were deployed in Syria and fought alongside Russian and Syrian Arab Army forces in the country. Wagner went sole to sole with ISIS and other anti-government forces in a variety of battles over the next few years. In 2018, one of the most infamous Wagner battles took place in the town of Khasham in the Syrian governate of Deir Ez-Zor when Syrian Arab Army forces backed up by Wagner mercenaries engaged Kurdish forces backed by the US military. The US launched airstrikes in defence of the Kurds and it’s believed around 15 Wagner men were killed.

Today they are one of the most prolific, and secretive, modern mercenary companies in existence.