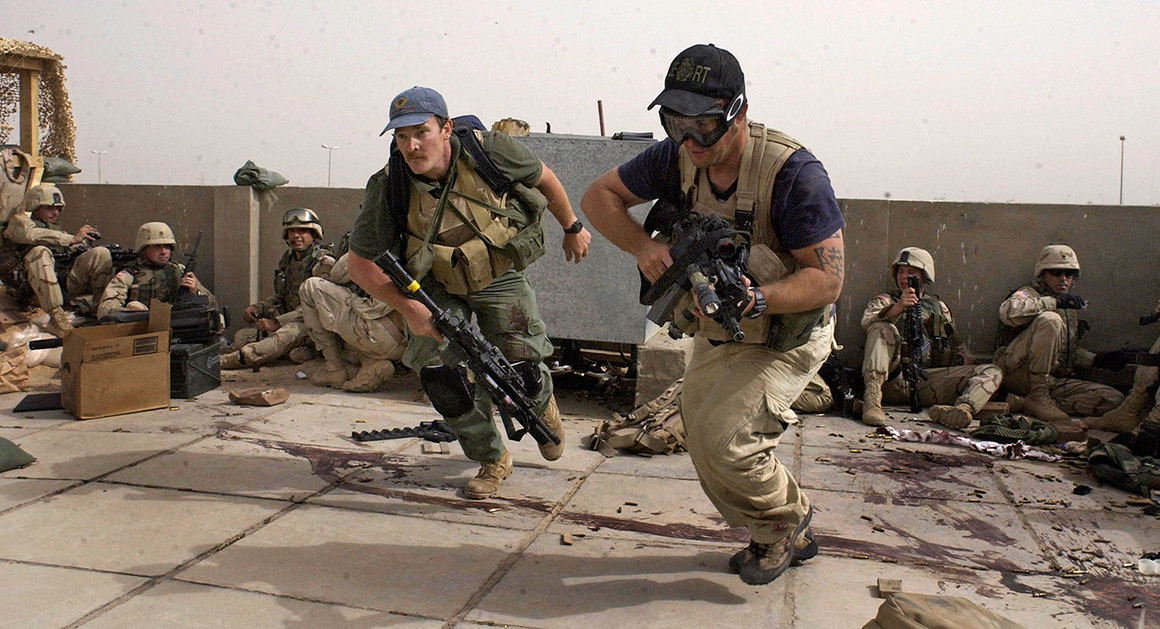 When you mention the word mercenary, many bring their minds back to the glory days of mercenaries. The days when characters like Mad Mike Hoare and Seigfried Muller were running mercenary operations around Africa. Whilst those men are gone, the line of work has not. Modern Mercenary companies exist and operate through conflict zones on various continents.

Whilst often branded as a force of heartless evil, you may be surprised to learn that many were far more effective than the UN in various conflict zones. In this article, we’re going to delve into 5 of the most infamous modern mercenary companies.

In 1989 as South Africa’s apartheid regime began to collapse. As the recent conflict during the South African Border Wars drew to a close, the South African military began to drastically downsize and many South African soldiers suddenly found themselves out of work and looking to provide their soldiering expertise to anybody with cash. The same year, Executive Outcomes appeared on the scene.

One South African military unit which had been recently disbanded was the Civil Cooperation Bureau. The CCB specialized in covert operations abroad and would routinely carry out assassinations as well as set up fake companies abroad with the aim of getting around UN sanctions placed on South Africa’s Apartheid regime. Executive Outcomes recruited many of these men and at its height had 2,000 highly trained soldiers on its payroll.

Executive Outcomes is capable of rapidly deploying a battalion-strength force almost anywhere in the world with impressive asset support. EO owns a slew of armoured fighting vehicles: two Boeing 727s and a C-47, attack aircraft such as Mi-24 gunships and two MiG-23/27 fighter planes and all manner of light and medium artillery.

After being kicked out of Angola, in 1995 Executive Outcomes were operational in war-torn Sierra Leone where they assisted government forces in their fight against the ruthless rebel group called Revolutionary United Front (RUF). EO did not just have highly trained men but was also armed with a fleet of fighter jets, aircraft, tanks, APCs, and even two Boeing 727s. They utilized their armaments to decimate the RUF and take back control of captured diamond mines which were a huge source of income for the rebel forces and subsequently forced a peace agreement.

In a case of history repeating itself, the UN stepped in and forced Sierra Leone to throw EO out of the country and replace them with a UN peacekeeping force, which again, failed miserably. The RUF regrouped, rearmed, and launched a bloodthirsty attack on the capital of Sierra Leone, Freetown, in an operation called ‘No Living Thing’ which slaughtered thousands of civilians.

Despite contracts with various international companies like Texaco and Chevron, Executive Outcomes was dissolved in 1998, but the company set the stage for a wave of mercenary companies in the years to come. One of them, being the American company of Blackwater.

One of the smaller PMCs compared to other companies in this article, the Slavonic Corps was founded by a pair of Russians named Vadim Gusev and Yevgeniy Sidorov, back in 2013. The PMC was registered in Hong Kong and advertised employment opportunities on a string of Russian websites specializing in military technology and history, think Reaper Feed but in Cyrillic.

The Slavonic Corps offered an attractive monthly salary of $5,000 to men with a military background and this attracted a range of former Russian special forces to their ranks who literally signed their contracts to the company of their knees at a Russian railway station platform and were rapidly deployed to Syria via Lebanon. The Slavonic Corps were then sent to a Syrian Arab Army base in Latakia and split into two companies of around 130 soldiers each. They were then tasked with protecting oil fields in Deir Ez-Zor.

The Slavonic Corps was no sanctioned by the Russian or Syrian government. The new recruits discovered this when they were on the ground and stuck in Syria if they wanted to see Russia again, they had to fight their way out. The company broke its promises of issuing up to date military equipment to its men. Instead of promised T-80 battle tanks, they provided buses armored with crude steel plates.

As a result, the company began to fail in its mission. Their deployment to Syria culminated in a disastrous battle with thousands of Islamist insurgents near the Syrian city of Al-Sukhnah where the Slavonic Corps was forced to retreat. The mission in Syria was abandoned and the group returned to Russia where all fighters were arrested by the FSB under suspicion of mercenary activity.

Out of all modern mercenary companies, the Slavonic Corps ended worse than most. The company founders Vadim Gusev and Yevgeniy Sidorov were charged and jail in 2014. The $5,000 dollars a month promised to the mercenaries of the Slavonic Corps was never paid, and with the company heads in a jail cell, it likely never will be.

Formed in 1997 as Blackwater Training, the company’s initial aim was to provide training services to US military and law enforcement and soon they opened multi-million dollar training facilities in the US to do so. However, as the War on Terror broke out in 2001, Blackwater took on an entirely new role and became the Blackwater Security Company which would go on to become one of the most infamous modern mercenary companies to have ever existed.

Following the US invasion of Afghanistan, Blackwater was amongst the hundreds of private military firms employed by the US government but their contracts were more high end than others. They were tasked with providing security services to the CIA headquarters in Langley, Virginia as well as a different CIA base that was at the center for the mission to capture Osama bin Laden.

In 2003, Blackwater was tasked with its first overseas contract following the US invasion of Iraq in 2003 when it was given a $21 million contract to provide security and two military-grade helicopters for the head of the U.S. occupation in Iraq, Paul Bremer. Following this, Blackwater became one of the main private military companies employed in Iraq, but soon earned a reputation for being trigger happy and going rogue.

Various incidents occurred of Blackwater employees shooting Iraqi security guards and civilians dead, including one of the guards of the then vice-president of Iraq. During one incident in the Green Zone of Baghdad in 2006, a car accident took place between a US Army Humvee and a Blackwater SUV. It’s reported that Blackwater mercenaries disarmed US troops and forced them to life facedown at gunpoint until the situation was resolved. Various Blackwater men were also killed during the war in Iraq in their various sole to sole engagements with Iraqi insurgents.

In 2007, whilst providing an armed escort of U.S. State Department vehicles through Baghdad, Blackwater mercenaries claimed they were ambushed on Nisour Square Massacre and opened fire from all directions. In the aftermath, 17 Iraqi civilians were dead and twenty injured. Blackwater was kicked out of Iraq the next day. In the years following, Blackwater underwent various name changes and restructuring and no longer exists under the original Blackwater brand. Overall, Blackwater had been given over $1 billion in US government contracts.

Out of all of the modern mercenary companies, Wagner is arguably the most secretive and sinister group. Hell, we couldn’t even find their logo to show you guys! Wagner PMC was founded back in 2014 and is now suspected to be headed by a powerful Russian businessman named Yevgeny Prigozhin, who is believed to have links to the Kremlin.

Wagner was founded by a former decorated Russian Spetznaz officer named Dmitriy Utkin whose military callsign was Wagner. The mercenary group set up offices in Russia, Hong Kong, and Argentina.

If violence wasn’t your last resort, you failed to resort to enough of it.

As the Ukrainian regions of Donetsk and Lugansk erupted into civil war shortly after, Wagner men saw their first bought of action as they fought alongside Russian separatists against Ukrainian forces in various battles, including the battle for Donetsk airport. Utkin was reportedly wounded in Donetsk when he was hit in the liver by shrapnel. As Russia began its deployment to Syria, Wagner withdrew from Ukraine in 2015.

Wagner mercenaries were deployed in Syria and fought alongside Russian and Syrian Arab Army forces in the country. Wagner went sole to sole with ISIS and other anti-government forces in a variety of battles over the next few years. In 2018, one of the most infamous Wagner battles took place in the town of Khasham in the Syrian governate of Deir Ez-Zor when Syrian Arab Army forces backed up by Wagner mercenaries engaged Kurdish forces backed by the US military. The US launched airstrikes in defence of the Kurds and it’s believed around 15 Wagner men were killed.

Alongside Syria and Ukraine, the Wagner group has made appearances in warzones and crisis zones across the globe from Africa to Central America. They remain active to this day are one of the most prolific, and secretive, modern mercenary companies in existence.

The most dangerous people in the world are not the tiny minority instigating evil acts, but those who do the acts for them. For example, when the British invaded India, many Indians accepted to work for the British to kill off Indians who resisted their occupation. So in other words, many Indians were hired to kill other Indians on behalf of the enemy for a paycheck. Today, we have mercenaries in Africa, corporate armies from the western world, and unemployed men throughout the Middle East killing their own people – and people of other nations – for a paycheck. To act without a conscience, but for a paycheck, makes anyone a dangerous animal. The devil would be powerless if he couldn’t entice people to do his work. So as long as money continues to seduce the hungry, the hopeless, the broken, the greedy, and the needy, there will always be war between brothers.

If you enjoyed this article on the alliance of mercenary consortiums, check out our related articles in our military history department.