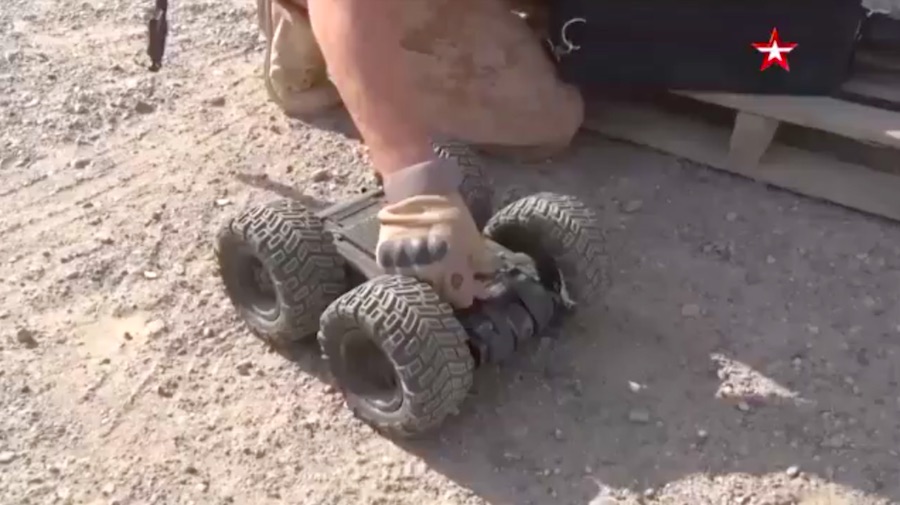 In the days of Ancient Egypt, the Scarab Beetle represented a symbol of immortality. Today, the name has been fittingly applied to small demining robots deployed by the Russian military in Syria. Photos and footage captured back in 2017 confirmed the use of SCARAB robots being used to remove booby traps and unexploded ordnance from the infrastructure and ancient monuments in the Syrian city of Palmyra.

The SCARAB is an unmanned ground vehicle which is designed to collect data in hard to reach or dangerous zones. The SCARAB robots then transmit the collected data via RF link to the video surveillance and remote control unit.

Designed by Set-1, the SCARAB exploration platform is a wheelbase with built-in high-resolution cameras, thermal cameras, microphones, and audio-video transmitters.

Alongside the SCARAB robots, the Russian military has also deployed the SPHERE system to work alongside. The SPHERE is a baseball-sized wireless exploration device equipped with visual and IR cameras, microphones, position sensors, signal processing, and data recording

The SPHERE set consists of wireless exploration device and remote control, integrated with the display. Video surveillance and remote controls unit receive audio and video transmission from the SPHERE. The obtained video is immediately displayed on the built-in monitor. Obtained audio information from the SPHERE’s microphone can listen via headphones.

Like the SCARAB robots, the role of the SPHERE is to collect data in hard to reach or dangerous zones. The SPHERE then transmits the data via RF link to video surveillance and remote control unit.

The Russian military began their deployment to the war-torn state of Syria in late 2015 following an official request from the government of Bashar al-Assad for military assistance against the onslaught of various rebel and Islamist groups which posed a threat to his regime. The Syrian Civil War has now entered its tenth year running.

For related articles on battlefield technology and weapons be sure to check out our weapons and tech department.