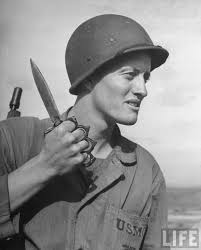 When it came to close combat in the trenches of the First World War, the weapons used were medieval style and brutal. In the past, we’ve covered the infamous sawback bayonet used by the German Army, the trench gun used by the US forces, and the dagger used by the Arditi. Almost all of which was veering over the line of being amongst banned weapons of war. Today, we’re going to look at the brass knuckle knife, otherwise known as the Mark I trench knife.

Since the dawn of humanity, we’ve been using edged weapons to kill one another. Skeletons that date back to 430,000 years ago have been found riddled with evidence of stab wounds. As we moved into the 20th century, the world saw unprecedented forms of warfare in the form of the First World War. But despite the array of deadly new technology on the battlefield, we soon resorted back to the grim ancestral method of close combat. Which is where the brass knuckle knife comes in.

Depending on the time of day, average trench combat in the First World War consisted of two main phases. The first phase took place in daylight and consisted of two sides in opposing trenches firing shots at each other over the artillery ravaged hell of no man’s land. Occasionally, this would be broken up by what the British coined ‘over the top’ which was usually a horrific massacre that resulted in a few feet of ground gained, on a good day.

The second phase that took place at night was covertly navigating no man’s land to enter the enemy trenches undetected. If soldiers were lucky enough to survive the crossing, they needed to remain hidden for as long as possible and quietly dispatch any enemies they came across. Bayonets in WW1 were essentially a short sword like weapon used for stabbing and were far too long for this. The brass knuckle trench knife, however, was perfect.

The Brass knuckle knife was designed by the US military during the First World War. Its aim was to assist American soldiers in the trench combat that was synonymous with the conflict. Initially, the brass knuckle trench knife was produced in France rather than the US, to prevent any delays the US Army might face when the knives crossed the channel.

Shortly after its introduction, the knife underwent a series of upgrades following on the ground reports of its use in combat. The US military subsequently gave contracts to produce the knives to various American manufacturers. Stronger steel was used and the final, perfected model was called the Mark I Trench Knife.

The Brass knuckle trench knife had a double-edged blade around 6.75 inches long that could be utilized for both stabbing and slashing attacks. The handle of the brass knuckle trench knife was given a black factory finish and armed with cast spikes on the bow of each knuckle. The sheath of the early models was made of cast iron due to the scarcity of steel in wartime France.

The spikes on the Brass knuckle trench knife served two purposes. Firstly, they prevented the enemy from grabbing the soldier’s hand and disarming him. Secondly, they proved to be absolutely lethal in close combat and were used to crush the enemy’s skull. The damage inflicted by the iconic sharp tips on the brass knuckle trench knife was also hell for a medic to treat.

In the conflicts that followed the First World War, the brass knuckle knife came out of retirement many times although it never saw usage as widespread as WW1. In WW2, the Korean War, and Vietnam, the knife once again became a trusty close-combat weapon for US troops once again. These days the knife’s role is wound down to being a highly sought after collector’s item.

For related articles check out the Military History and Weapons and Tech Reaper Feed departments!