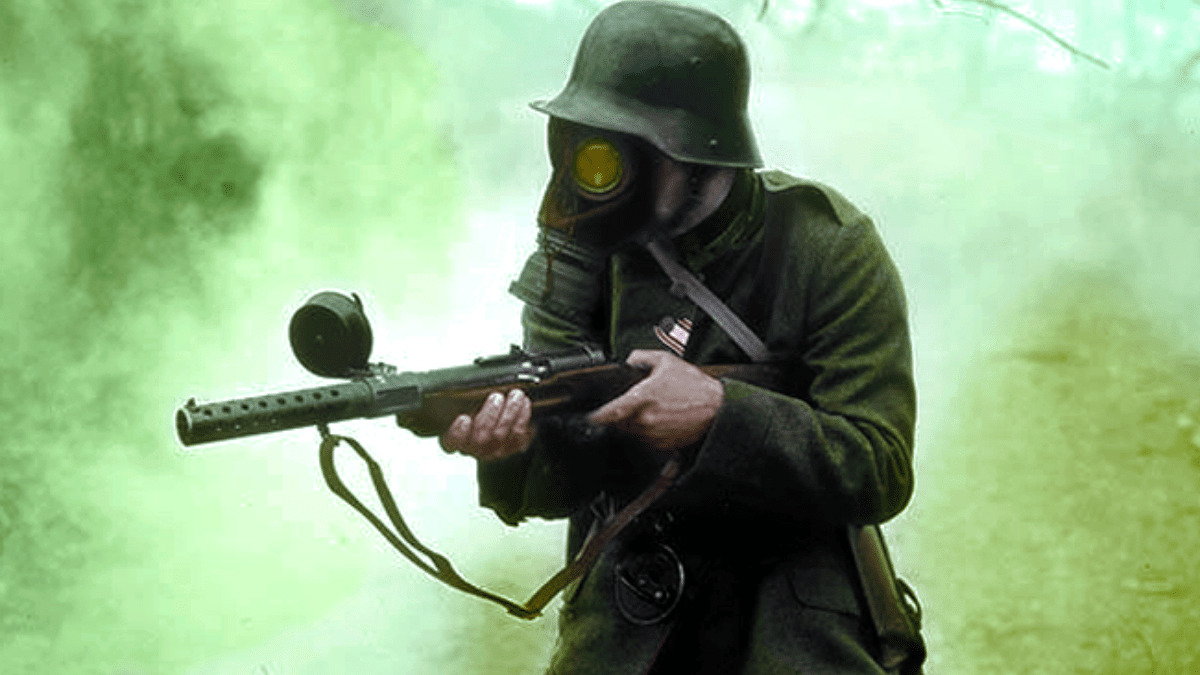 In the first article of Reaper Feed’s militaria section, where we focus on objects in our private military museum, we will delve into a bayonet with some serious history: a converted German sawback bayonet from the First World War. This WW1 Sawback Bayonet became hated by all sides for a number of gruesome reasons.

During WW1, German troops were issued with a bayonet called the S98/05, designed to rely on the length of its hilt mounting to fix the blade to its rifle. The weapon was issued in two designs: one with a serrated saw back edge and one without.

Those featuring a serrated edge only made up 6% of the total number of bayonets issued. This WW1 sawback bayonet was reserved for NCOs, Pioneers, machine gun crews, and, most infamously, the storm troops known as Stosstruppen. It was a favorite amongst specialist units due to its effectiveness in cutting down bushes and barbed wire characteristic of the no-mans-land of WW1.

In the following image, a German ‘Stosstruppen’ stormtrooper can be seen carrying the serrated edge variant along with a repurposed armored brow plate known as a Stirnpanzer. Originally designed for the front of the M16 helmet, this soldier has repurposed it as a face shield likely due to the horrific close-quarters combat he would have been involved in during raids on enemy trenches.

When used in combat, the WW1 sawback bayonet with 29 razor-sharp teeth became extremely unpopular for all sides for a number of reasons. The first was due to when it was thrust into the enemy. The sawback edge would tear out the insides of the victim leading to gruesome injuries and prolonged, agonizing death.

As a result of Allied soldiers began torturing and executing on-site any German soldiers captured with such weapons in revenge. Consequently, the German High command made a decision to recall all of the German sawback bayonets in 1917 and grind off the saw back edge before reissuing them to all units.

The German sawback bayonet in our collection was produced by Mauser weapons factory in 1917 and features evidence and the serrated edge being removed, it was likely one of the last productions of the sawback model. The history and frontline experience this weapon has seen can only be imagined.

The Stosstrupen, who this bayonet would most likely have been issued too before being modified and sent to another frontline unit, was a symbol of terror on WW1 battlefields. In the latter stages of the First World War, the British had invented the tank which was revolutionizing warfare at the time and leading to significant Allied victories.

Germany was unable to match this Allied upgrade due to being outnumbered in both manpower and industry and decimated by years of war. The Germans knew that if they entered a war of material, known as Materialschlacht, it would be catastrophic. So it was back to the drawing board and before long, the Stosstruppen was brought to the fight.

Rather than a combination of technology and brute force that defined early tank warfare, the tactics of the Stosstruppen relied on brainpower and surprise. Instead of throwing mass waves of troops at heavily armed Allied trenches, small groups of them would identify weak spots in the line before infiltrating and wreaking havoc, cutting off supply lines and reinforcements before being back up by deployments of regular German soldiers.

This unit was extremely well trained and physically fit, often possessing Germany’s imperial sports medal. Their tactics were fierce and Allied units soon grew to expect no mercy when faced with a feared Stosstruppen attack. Many former Stosstruppen put their skills to work in post-WW1 Germany, as they joined the various violent political groups such as the Nazi and Communist party, all vying for power.

Following Germany’s defeat in WW1, production of the bayonet in question stopped completely. Any leftover supplies that hadn’t fallen into enemy hands during the war were subsequently distributed to armed forces of other countries like Turkey, Poland, and Yugoslavia.