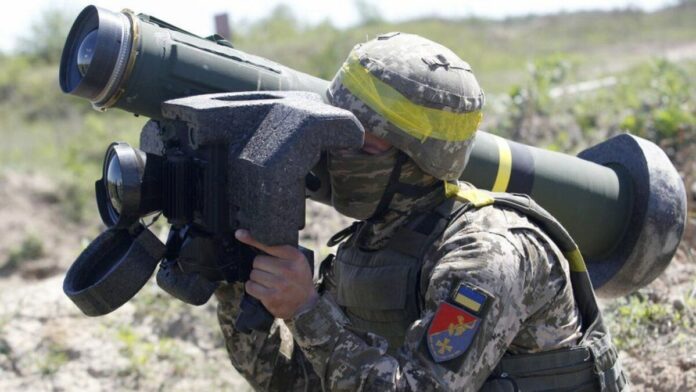 A video from Ukraine shows the moment a Ukrainian soldier strikes a Russian armored vehicle with a FGM-148 Javelin. The high-tech FGM-148 Javelin system uses an arched top-attack profile. As seen in the footage, the Javelin climbs above its target for improved target visibility and then strikes where the armor is weakest. This system was designed with Russian tanks with the adversary in mind, as most weapons of the United States since the cold war.

Since the beginning of the Russian invasion of Ukraine eight months ago, Russian Forces lost thousands of units of armor. This includes main battle tanks, armored cars and infantry-fighting-vehicles. A significant number of them have been lost of deployed FGM-148 Javelins. Over 5,000 Javelins were supplied by the United States to Ukraine to defend themselves against occupying Russian Forces

Tanks have their strongest armor typically at the front glacis plate, and cannon mantlet. Tanks evolved this way as ground based anti-tank weapons were mainly used to strike tanks at the front, as the tank is typically facing its target unless ambushed. So it was always unlikely that tanks would get hit at the top with standard AT weapons, unless ambushed from a building directly above.

This made adding armor to the top of the tank redundant and unnecessary weight. The research and development department in Lockheed Martin saw this as an exploit, and designed the javelin which takes advantage of the weak top armor.

To fire, the gunner places a cursor over the selected target. The Javelin command launch unit then sends a lock-on-before-launch signal to the missile. Thanks to its soft launch design, the FGM-148 Javelin can be safely fired from inside buildings or bunkers.

So how can one protect himself from Javelin strike? This is a question that is discussed a lot in every country defense institution right now. The simple answer is to add some sort of passive or active protection system. This is, however, simple to say but hard to implement. Even without taking into account the fact that no off-the-shelf solution is readily available on the market it would still take a lot of work to actually install this, yet fantasy, system on all the tanks that might need anti Javelin protection in the nearest future.

And even with such system available, there are still a dozen other potential treats that tank face on the battlefield. As was mentioned in numerous articles on this website – the main rising treat is the use of civilian UAVs. And The worst part is that they are nowhere near their full potential as of yet – as we can see from the actual front-line, combatants on both sides manage to work out new ways of using operated drones.

Anyhow, while many claim that Javelin has ended the era of tanks it is hard to agree with the statement. However, Javelin certainly decreases their actual number.