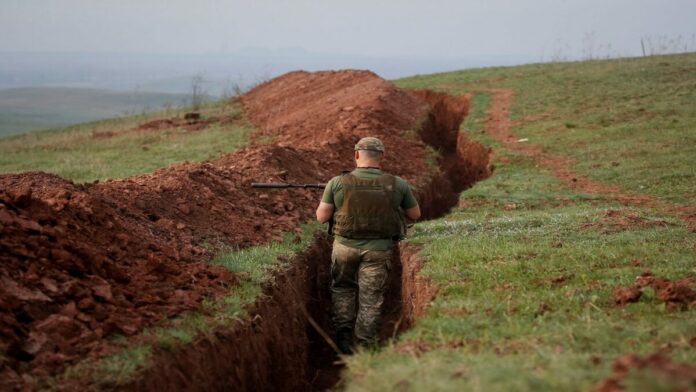 Continuing our tread of WW1 trench system style videos from Ukraine we have came onto this video. Here we can see a single section (12 people) managing to successfully attack and defeat the enemy. One can ask – how is this related to WW1? Well, this is the exact offensive tactics which desired by all armies by the end of the Great War. Small groups of infantry, equipped with grenades and automatic weapons, covered and supported by an armored beast – what can go wrong?

This video shows a tiny episode of a huge war. And this gives us the perfect opportunity to look deep into this single scenario, noting the errors made by both sides.

Analyzing the video, it would be fair to say, that the advancing party was incredibly lucky as their counterparts were very ill prepared for any sort of attack. The word “lucky” may be a wrong one to use in this context, as there is a high chance that it wasn’t just luck, but instead a good reconnaissance. Anyhow, those who were defending the trench were incredibly unprepared for basically anything, as they weren’t attacked by some unstoppable force, but instead by just a single infantry section.

The tank was advancing through the open field and there were plenty of time to destroy or at least damage it with ATGM or with RPG-7 grenade launcher. The reconnaissance of the russian side could also been better – having a regular DJI drone observing the situation above their trench system would give a good chance to stop the attack. The trench system itself doesn’t look well designed either, as almost no fire comes out of it. Single tank, having a 125mm cannon and 2 machine guns managed to suppress a whole unit, so that the advancing infantry can just walk towards the enemy without crawling or hiding in any way.

Have the offensive side run into a better prepared defenders like this – they would have taken most serious casualties, it’s likely that all of them would be KIA. First and foremost, the tank does not seem to be a best vehicle of choice for such operation. On one side the 125mm cannon is an absolute overkill against lightly defended position. However, on the other side, it is really hard to deal any actual damage to the infantry in the trench with the tank shot – they are just too well protected from the shrapnel. So the main role of the tank is to decrease the morale of those in the trench system and it worked perfectly well in this situation.

The enemy riding on top of the tank is another temporary trick which turned out to be rather permanent. If the attacking force got under heavy mortar fire on their way to the trench system – they would have taken casualties big enough for the offense to be over.

It would make more sense for the advancing troops to use infantry mobility vehicle to deliver themselves to the enemy trench. The suppression fire from a 120mm mortar would also be better than tank rounds, as the mortar would actually have a goo chance to kill those inside the trench. Overall I am talking about something like this: