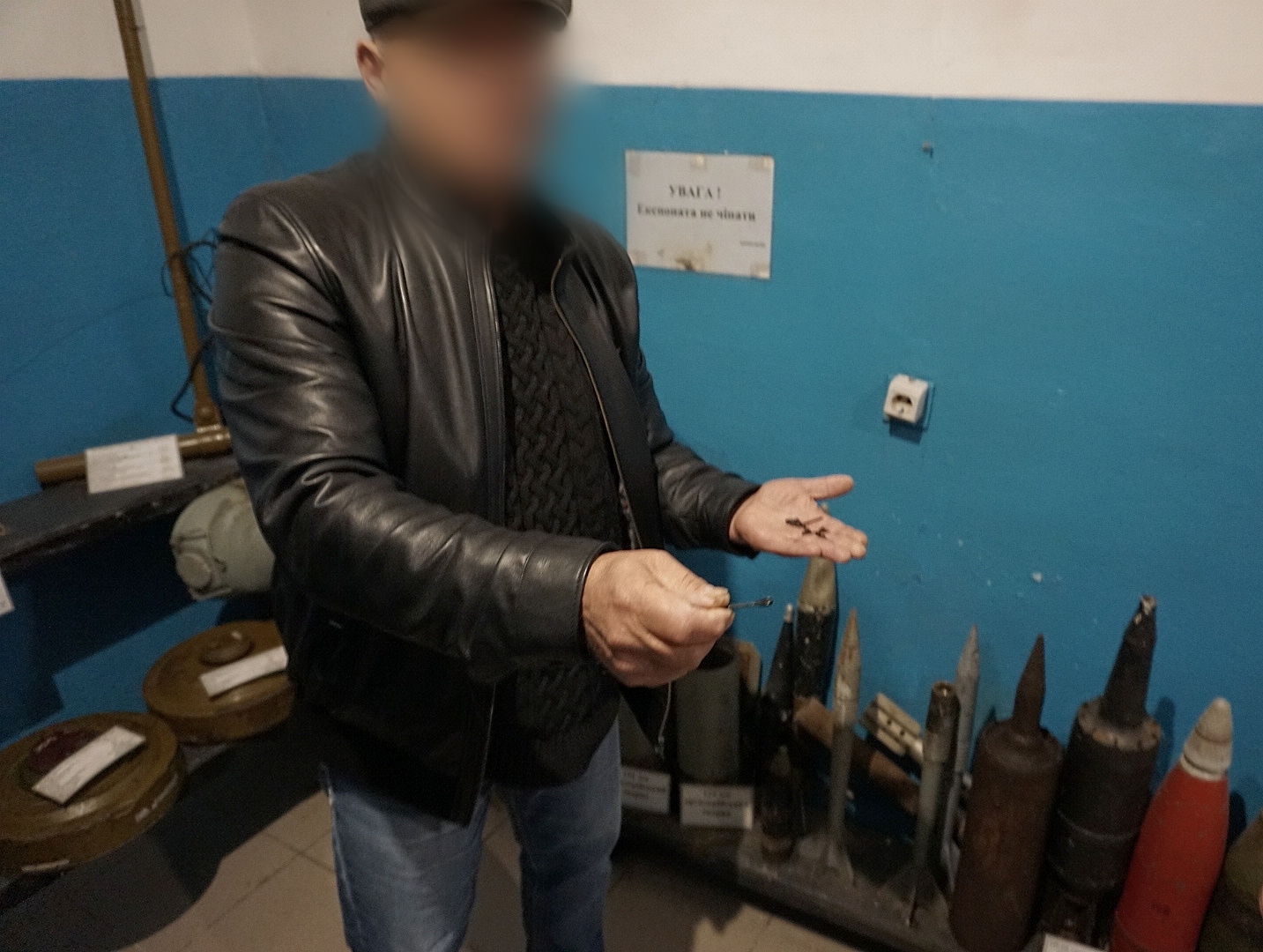 One hand presented an array of razor-sharp components that looked like they had been dug up from a medieval battlefield. Alex’s other hand wiped tears that had started to fall from his eyes. “They hit our homes on Christmas morning in 2015 with these. My kids woke up to no presents, only these red hot needles punching through our walls. ‘The flies of the Devil’ is what my teenage son nicknamed them”. Alexie was talking about Flechette rounds used in the Ukrainian conflict. It’s a weapon that teeters on the edge of legality in wars around the world.

We were in a bunker in the provinces of rural Ukraine and standing in a damp underground room littered with artillery shells and spent cartridges. In the past, it had served as an outpost for the Red Army and the Wehrmacht during the Second World War. In the Cold War, it became a Soviet Army listening post.

Today, it’s an underfunded museum. Its artifacts consist of what was left behind in the bunker or battlefield trash from the nearby war in Eastern Ukraine. Mutilated Grad rocket shells, tank parts, and inert examples of artillery rounds are donated to the museum by local members of the Ukrainian military.

Alexi Simeonov is a refugee from the War in the Ukraine and volunteered to be my guide around the museum. In his mid-50s, he had worked as in the mines of Donetsk for most of his life. In 2015 he was forced to flee the Donbass region with his family as grueling combat surrounded them. Like many people I’ve met across the countries of Eastern Europe, Alexei’s knowledge of local and world history was astounding.

”Thank the Soviet Union for that. They were bastards, but at least they gave us free education and a trade for life. It’s just a shame the people in charge were so clueless when it came to politics”. Quipped Alexei in response to my compliments on his ability to reel off niche historical facts with ease.

As we moved deeper into the bunker Alexei unlocked the heavy Soviet door to the war room dedicated to the current Eastern Ukraine conflict. Inside, he proceeded to brief me on the array of killing machines on display around the room. All of which he had dark nicknames for.

”This one I call ‘the Angel of Death’. It floats from the sky and kills you before you know even what fucking hit you” said Alexei whilst pointing up at a partially detonated SADARM (sense and destroy ARMor) bomb that is designed to search for and obliterate enemy tanks.

When it came to the Flechette Round, Alex broke down as he recalled its usage against him and his family. Which side fired them, he still doesn’t know. ”Separatists of the Ukrainian Army, both sides always blame the other. Bastards” he said, reinforcing the reality of the conventional war of shadowy deniability that characterizes the Donbass conflict. Alex excused himself as he left the room to get some fresh air.

Flechette is French for ‘dart’ or ‘little arrow’. It’s a simple steel projectile with a razor-sharp point and a fanned tail for stability when in flight. They were introduced to modern warfare in the First World War. Flechettes in WW1 were dumped onto the enemy lines from airplanes. Since then, delivery methods of military flechettes have expanded massively. Single shop weapons like the APS underwater rifle to artillery rounds packed with thousands of razor-sharp darts are utilized the deploy the deadly rain. But whichever way they’re fired, they don’t discriminate.

During the Vietnam War, the military flechettes were used by US forces. Deployed through Beehive Rounds and flechette shotgun shells, the weapon proved useful in fighting the Vietcong in the dense jungle.

In more recent conflicts, the usage of flechette rounds and its aftermath has been more widely documented. These days they are fired from tanks and designed to detonate in mid-air. The red hot darts are subsequently fired over a wide area that will decimate any human being unfortunate enough to be in the area.

In the Russo-Georgia war back in 2008, journalists reported flechette injuries after they were fired by Russian military forces. In the same year the Israeli led Operation Cast Lead in Gaza, a 23-year-old Reuters cameraman named Fadel Shana was killed when flechettes tore through his press vehicle and body armor killing him outright.

The 2008 war in Gaza led to the release of the Eitan Barak book – Deadly Metal Rain: The Legality of Flechette Weapons in International Law. The book illustrates that after WW1 people pushed flechette weapons to be banned but they never were.

As the international community assessed the legality of flechette rounds in modern warfare, it’s believed they were considered a preferable to banned weapons of war such as anti-personnel mines and cluster bombs in the sense that, due to being solid pieces of metal, flechettes did not create explosive remnants of war posing risks after the battle. An acceptable evil, as it were.

Alex returned to the room with red eyes that had lost their initial shine due to the recollection of sheer trauma. As he did, the description of ‘a necessary evil’ sounded demented. The interpretation that lawmakers and politicians have of the weapons in modern warfare is a world apart from the interpretation of those who have seen these weapons punch through their homes and scar their family for life.

Alex went to turn off the Soviet-era light switch and round off my trip to the bunker. As he did, he picked up some of the sharp, deadly cargo of the flechette rounds and poured them into my hands.

”A souvenir to remember me by” he said with a forced smile in a vain attempt to brighten the mood.

Related article: Driving the Road of Death in Donetsk.