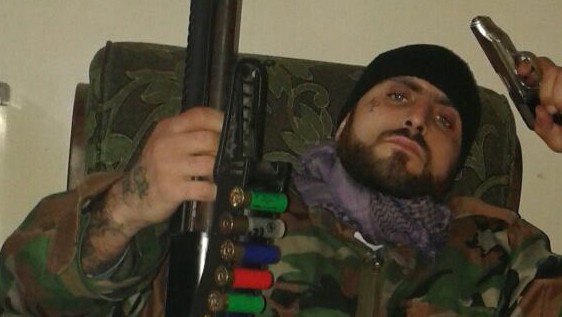 The Syrian Civil War has provided no shortage of unique, bizarre, and shocking combat footage. But one of the most surreal pieces of Syrian combat footage surfaced in 2014 and featured two members of various LA gangs fighting for the government forces of Bashar al Assad. In this article, we’re going to look back at the bizarre combat footage and where those members of LA gangs are today.

As the video was released various people speculated as to the identity of the two men featured. Before long, the US authorities confirmed that the men were Syrian nationals of Armenian descent who were deported from the US back to Syria in 2010 and 2012 respectively because of criminal activity amongst LA gangs. The information was relayed through Sgt. Tom Lorenz of the Glendale Police Department.

LA has one of the largest Armenian populations outside of Armenia, especially the area of Glendale. The LA gangs the men belong to operate under the Mexican mafia prison gang system. Many of its members have roots in Syria, Lebanon, and other Middle Eastern countries.

The first man in video deported to Syria in 2010 is Sarou ”Creeper” Madarian who introduces himself as a member of the Sun Valley Grumpy Winos gang otherwise known as the GW-13. Madarian initially appears to be Latino due to his penchant for speaking Spanglish.

The second man is Nercis Kilajian who was deported to Syria in 2012. Kilajian identifies himself as “Wino” from the Westside Armenian Power gang. Wino uploaded the video and photographs to his Facebook page, where it was subsequently picked up by Middle East Media Research Institute or MEMRI. Kilajian’s Facebook page also featured posts stating that he was fighting alongside the pro-Assad, Shia militant group Hezbollah.

“This is very unique because these guys are over there, and they are with the pro-Syria forces and pro-Hezbollah forces. We have been monitoring foreign fighters over the years, and there has been a handful of Americans going to fight, but they have been going to fight against Assad.”

The men were apparently fighting on the side of Bashar al-Assad who is a popular figure amongst Armenians due to his continuous efforts to protect the minority group which has an estimated population of around 100,000 in the country.

Throughout the video, the two men take about “gang-banging” and their “homies” as well as displaying gang signs and tattoos. They open fire from behind a cinder-block wall at what they call “enemigos” (enemies). The men do not receive any return fire, however. They were also featured in another (incorrectly titled) video that was also filmed in Aleppo.

Many viewed this video of LA gangbangers in Syria as a sort of novelty as it showcased western citizens fighting for Assad rather than against him, as all other foreign fighters seemed to be doing. it highlights the intricacies of the ethnic-sectarianism that defines the Syrian Civil War. The various Syrian minority groups that exist within the country found themselves between the Al-Assad government which claimed to protect them, and a plethora of anti-government groups that incorporated militant Jihadist groups from al-Qaeda to ISIS.

Open-source intelligence suggests that both of the men were killed in action. A Youtube video dedicated to their lives appeared online and no activity has been heard from the men since.