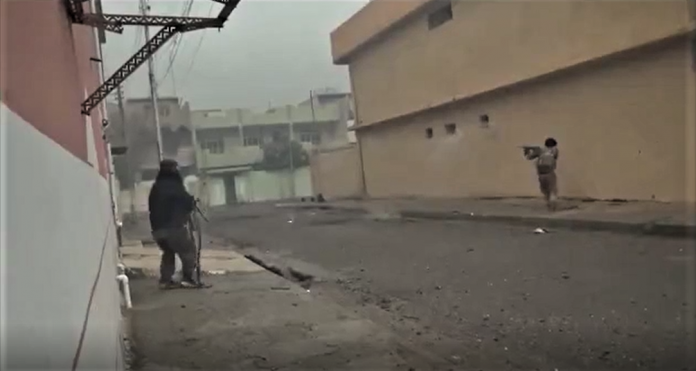 The latest addition to our combat footage section took place in the Iraqi city of Mosul in 2017. It shows an ISIS fanatic brazenly walk out into an open street only to be met by a hail of bullets from nearby Kurdish militia or the Iraqi Army. Incredibly, every bullet appears to miss the militant but peppers the wall behind him causing him to flee back to the safety of his initial position unharmed, unfortunately.

The ancient city of Mosul fell to the Islamic State in June 2014. At the centre of the city was the Great Mosque of al-Nuri. It was here that the ISIS leader Abu Bakr al-Baghdadi stepped onto the podium to declare the creation of the “caliphate”.

Mosul was an extremely strategic city for ISIS to capture. As well as being the second-most populous city in Iraq, it also has a majority Sunni population who generally have a deep distrust of the predominantly Shia Iraqi government and its armed forces.

The Battle of Mosul was concurrent with the Battle of Sirte in Libya and the Raqqa campaign carried out by the Syrian Democratic Forces (SDF) against ISIL’s capital city and stronghold in Syria. As a result, ISIS was on the backfoot and their fighting became ever more desperate and fanatical, as can be seen in the video featured here.

The fighting to oust the ISIS fanatics was brutal, prolonged, and fierce. Widespread and elaborate defences, booby traps, and the presence of civilians made advancing difficult and slow. But Iraqi forces pushed on and the city was captured from ISIS in July 2017. It is estimated that removing the explosives left behind by ISIS in Mosul as well as repairing the city over the next 5 years will cost around $50 billion.