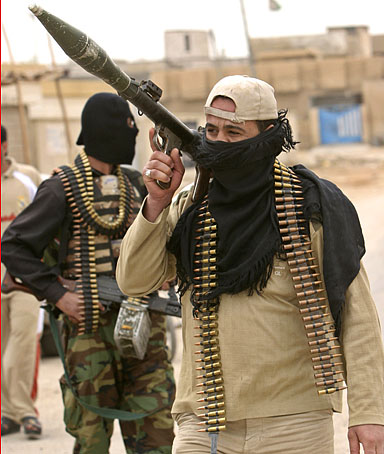 One of our readers submitted a piece of combat footage to us asking for our take on the footage. The video showed an insurgent in what looks to be somewhere in Syria preparing to fire an RPG over a wall. By doing so, his head promptly exploded across the street killing him in a split second. In this article, we’re going to look into what exactly happened and showcase the danger of RPG use.

From a poorly maintained weapon to exploding ammunition, there are various theories floating around about what caused this gruesome accident. The reality is rather simple. The insurgent fired the RPG directly into the white chunk of the wall immediately in front of him. The rocket deflected backward and obliterated his head and the launcher. You can see a chunk of wall get broken off by the impact. The following theories are my take on the footage.

1. The insurgent didn’t make sure that his front was clear from obstruction. If you look closely, once he aims, he backs down slightly and the pillar gets in the way.

2. An RPG has a slight delay between the trigger pull and the rocket launch. It’s possible the insurgent pulled the trigger and ducked too soon resulting in the rocket hitting the wall he was using for cover.

3. The sights he is aiming down are above the object but the rocket itself is not. Some basic training on muzzle clearance would probably avoid this but I highly doubt he has had any training. I remember shooting the wall in front of me with a 4x sight on an M4. I took a shot and never saw dust kick up behind or around my target. It left me a little confused until I noticed the freshly-scarred rock in front of my barrel. Taught me to be very careful about my muzzle clearance.

So there you have it, my take on the now-infamous video of the involuntary suicide of a Syrian insurgent. If you have a different theory as to what happened or would like to add your take on the incident, comment below.