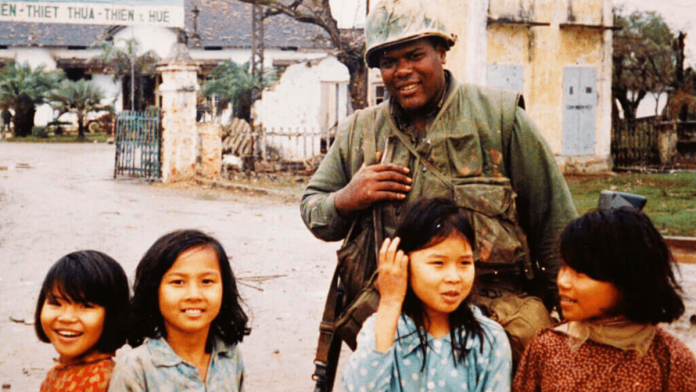 During the Vietnam War, Sgt. Robert Hughes was a Dive NCO for the First Recon Company of the U.S. Marines between 1967 and 1968. A large and powerful man who towered over many of his comrades, Robert Hughes was described as a “gentle giant” by the Marines who served with him. He was also known as claiming one of the most brutal kills of the Vietnam War.

The main duties of Sgt. Hughes was leading dive teams and maintaining the unit’s scuba diving equipment. However, when it came to donning his gear and submerging himself in the various treacherous waterways of Vietnam, the gentle giant personality of Sgt. Hughes disappeared as he prepared himself for the countless threats that often lurked beneath the water.

As well as the unforgiving natural threats in Vietnam, the rivers and waterway were often home to Vietcong divers or underwater entrances to Vietcong tunnels full of enemy fighters. It was not uncommon for U.S. troops hunting VC fighters to observe the Vietnamese flee underwater and never reemerge. Signaling that they had made their escape into one of the countless tunnel entrances located below the water.

Through the conflict in Vietnam, scuba trained Force Recon Marines carried out combat diving missions in a variety of roles. Inspecting bridges was a common role in case enemy sappers had booby-trapped them. Additionally, these diving teams would comb the river bed looking for bodies, equipment caches, or enemy tunnels. It was a mission of the latter variety where Hughes would earn his reputation.

– A Marine recollects his service with Sgt. Hughes.

As he donned his diving gear as he had done many times, Hughes was preparing himself for another mission underwater hunting VC tunnel entrances. Below the water, he cautiously made his way through the murky darkness straining his eyes for any threats around him. One hand was used to navigate his way along the riverbank, whilst his other hand firmly gripped a Kabar knife.

Hughes suddenly identified the entrance to a Vietcong tunnel but before he could react, a enemy VC diver burst out of it and grabbed onto Sgt. Hughes. The two adversaries were now locked onto each other in a fight to the death. Hughes quickly caught sight of a knife in the hand of the Vietcong diver and grabbed his wrist to prevent himself from being stabbed whilst simultaneously trying to plunge his Kabar into the enemy at the same time.

The VC diver copied Hughes, gripping his knife hand whilst trying to stab him with a Vietcong dagger. If the fight continued like this, both divers would likely drown unless one or the other got the upper hand. Hughes knew he had to improvise to win this fight and do it fast.

In lightning speed, Hughes pulled the Vietcong diver close to him by tightly wrapping his legs around his body. Now face to face, Hughes spat his diving regulator out of his mouth, pushed forward, and tore the enemy diver’s throat out with his teeth. As the mutilated diver released his grip, Hughes plunged his Kabar into him repeatedly for good measure. The fight was over and Hughes was soon back above the water.

This tale was one of at least two confirmed underwater kills this ”gentle giant” claimed throughout the conflict, and he was not the only one. Throughout the Vietnam War, there were multiple stories of grueling underwater battles fought between Marines and the Vietcong. Leading to the prevalence of a range of underwater weapons, although none as advanced as the technology of the Soviets who were designing the APS underwater rifle around the same era.

Whilst the iconic Kabar knife was the most valued weapon for underwater combat, many Marines brought privately bought revolvers with them. In underwater combat, a standard-issue Colt 1911 handgun was pretty much useless. A revolver, however, was said to still be operational. Thus, the riverbeds of Vietnam played host to numerous knife battles, shootouts, and other grueling examples of combat. But the story of Sgt. Hughes shedding his Gentle Giant aura is arguably the most infamous.