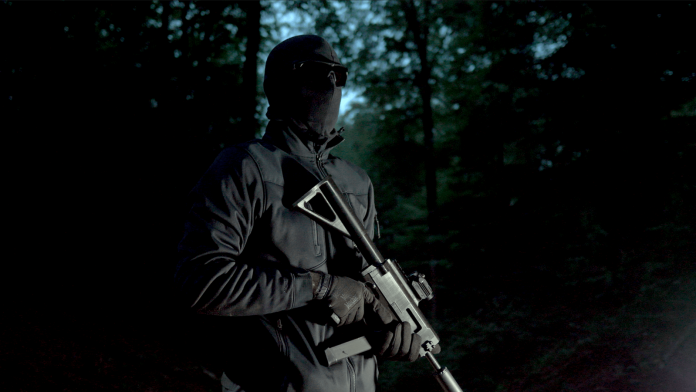 If you haven’t watched the Plastic Defence documentary yet, you’ve probably seen the ”I am extremely peaceful” meme being shared around. This latest documentary from Jake Hanrahan of Popular Front delves into the world of 3D printed guns in Europe. Reaper Feed’s Ioannis Ioannou, who is also one of the founders of Geopolitical Cyprus, sat down with Jake for a few words about the fascinating documentary that is rapidly growing in popularity.

Plastic Defence is really intense to watch. The new documentary by Jake Hanrahan of Popular Front follows JStark, a guy from a bizarre online community of 3D printed guns named Deterrence Dispensed. The documentary travels from his DIY gun-lab to the forest for an interesting discussion on 3D guns, gun possession, and the Freedom of Speech around Europe. JStark has produced the FGC9MkII. A plastic 9mm SMG looking like the son of an H&K UMP with a Kriss Vector after a wild night of sex.

JStark is also producing his own bootlegged 9mm ammunition. But beyond that, he is behind Deterrence Dispensed, a community that gives open-source access for anyone that wants to build his own firearms. All you need here is a 3D Printer and access to the Internet. It has been a couple of years since 3D-printed guns became a new thing among gun aficionados and arm possession enthusiasts around the globe. Technology is moving forward in this new field from the “Liberator”, a single-shot pistol in .380 ACP which first appeared in the United States back in 2013, to the FGC9MkII, the weapon JStark is presenting in the documentary.

No spoilers here, but Jake Hanrahan has created really good documentation of what is at stake around open-source 3D guns. Is it about self-protection? Is it a means of protection and self-defense against modern-day tyranny? Is something related to weird gun-owner cultists? Quality conflict journalism, as usual, by Popular Front with JStark expressing, in your face, his guns and Freedom of Speech manifesto during the 26 minutes of the Plastic Defence documentary.

An Interview With Jake Hanrahan About Plastic Defence

At Reaper Feed we also cover conflict and the aesthetics around it. We report from conflict zones and we like to reflect on quality work around us. We were impressed with the Plastic Defence documentary and got the chance for a quick chat with Jake Hanrahan over Telegram to discuss his new documentary.

Jake believes that the main discussion Plastic Defence is triggering is the whole debate around the defense of people in Europe against governments that are carrying weapons. Jake challenges JStark in order for the viewer of the documentary to decide upon JStark’s views on gun ownership and the Freedom of Speech.

Jake does not fully agree with the absolutist stance that JStark, the hero of his documentary, is taking on Freedom of Speech. “It is not just black or white”, Hanrahan points out.

During the documentary, Jake Hanrahan is pushing JStark on the limitation of Freedom of Speech by pointing to his gun. On the issue of Freedom of Speech and the weaponization around it, Jake is crystal clear. He is pro-Freedom of Speech, an absolute element of all free and democratic societies, but at the same time he clears out that any violation of it would lead to authoritarian behaviors. Jake does not fully agree with the absolutist stance that JStark, the centerpiece of his documentary, is taking on Freedom of Speech. “It is not just black or white”, Hanrahan points out.

On the European state of affairs, Jake Hanrahan is thinking that citizens have the right of self-defense against a tyrannical situation, applied by governments. He believes, though, that something like this is not happening, yet, in Europe but right-wing populism and a turn towards more oppressive policies is occurring during the last years. Regarding the future of the 3D printed guns, Jake thinks that is a really interesting debate to follow but he is partially rejecting that all of a sudden “we are going to see paramilitary groups with plastic guns all over Europe”. An interesting reflection on our question since those types of guns, even sophisticated ones like the FGC9MkII presented in the documentary. are not the type of guns to carry on the frontline of a real war situation.

Last but not least, and most importantly, Jake Hanrahan is inviting all of us to watch the documentary and draw our own conclusions. He believes that there are so many different levels to the debate around this. He is insisting that independent journalism is what really matters to him and he is more than happy that his documentary is shared everywhere, creates many feelings around its main character, JStark, and is 100% a self-made effort that is away from modern-day mainstream media and its toxicities.

A huge thanks to Jake Hanrahan for sitting down with us to discuss his new documentary. Like most non-mainstream and controversial Youtube channels, Popular Front has been demonetized. In order to support their groundbreaking conflict journalism, you can support them on Patreon whilst gaining access to a range of unique, subscriber-only content. Images from Plastic Defence for this article were supplied by the press pack issued by Popular Front.