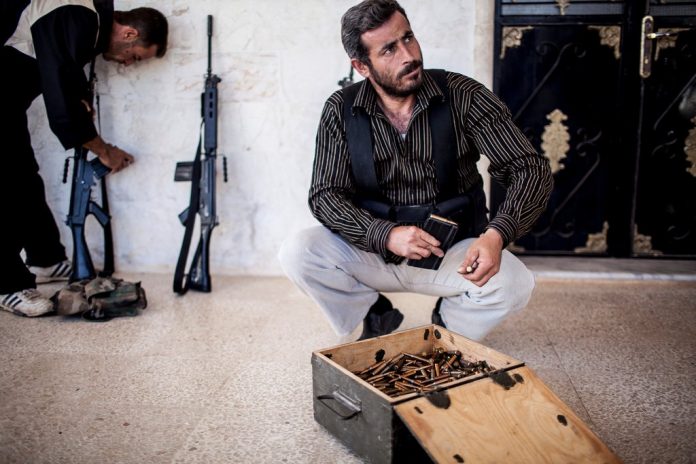 Project Eldest Son – Throughout modern warfare, faulty ammunition is a real and present danger. Viral videos on the darker side of the internet depict Iraqi insurgents being snuffed out in an instant as they launch mortar rounds or fighters losing their hands when a Kalashnikov obliterates itself whilst firing.

Many may put it down to a screw-up in the weapons factory, others mock the fighting ability of the people in the video. In reality, the background of these mishaps is a lot more sinister than you think. From Rhodesia to Syria, welcome to the world of spiked ammunition and exploding bullets.

The dark art of exploding ammunition was the brainchild of the British Empire prior to modern warfare during the Second Matabele War which took place in modern-day Rhodesia / Zimbabwe. The Victorian British Army was fighting a war against rebellious tribes of the Matabele and the Shona.

These tribes were heavily dependent on salvaged British ammunition to supply their fighters. The British subsequently ”lost” batches of exploding bullets to the enemy which then led to appalling injuries and demoralization amongst the tribal fighters.

The exploding bullet tactic was used throughout the Second World War by both Allied and Axis forces. However, it was during the Vietnam War when the idea was truly put into practice through the introduction of Project Eldest Son which became a case study of unconventional warfare and the definition of PSYOPS.

In the Vietnam War US special forces were known to purposely drop 7.62mm ammunition whilst behind enemy lines knowing full well that the Vietcong would find them, dust them off, and use them for their own weapons. However, the ammunition was laced with C4 which resulted in a gruesome effect when fired.

When Vietcong fighters were found with Kalashnikov receivers and bolts implanted into their faces, the US knew it was working. As a bonus, it also bred mistrust in the Chinese ammo that the VC were supplied with.

Green Berets assigned to the Studies and Observation Group (SOG) were tasked with capturing Vietcong ammunition whilst on operations. Back at base, the captured ammo was partially disassembled and reassembled with new deadly components.

The smokeless powder in rifle and machine gun rounds was replaced with a high explosive with a strikingly similar appearance to the original powder. The amount of high explosive was strategically measured to create five times the amount of normal pressure of a firearm and aimed to project the exploding AK parts back into the head of the Vietcong operator.

Exploding bullets were not the only tactic used in Project Eldest Son. Captured VC mortar rounds were fitted with fake fuzes that would ensure the mortar round exploding as soon as it was dropped down the firing tube, killing anybody within close proximity of the weapon.

The sabotaged ammunition was distributed sparingly to avoid revealing any cues to the source of the ammunition and create the ultimate psychological impact and distrust of Chinese supplied ammunition. The overall goals of the project were for the VC enemy to question the safety of their ordnance as well as cause combat impairing injuries to its fighters.

CIA documents revealed that during the Soviet-Afghan war that raged from 1979 to 1989, Soviet KGB had a similar operation to that of Project Eldest Son in order to undermine the fighting power of the Afghan Mujahideen. The Soviets would spread exploding bullets amongst the supply chains of the Mujahideen by allowing them to ”fall off the back of a truck” into enemy hands.

As America went into Afghanistan in 2001, they proceeded to use the same tactic as the Soviets did. This time in an attempt to conduct PSYOPS against the Taliban forces throughout the country.

As America became bogged down by the plethora of violent insurgent groups during the Iraq War of 2003 and onwards, exploding bullets made a comeback. According to various U.S. Military veterans and officials, the Pentagon and the Central Intelligence Agency secretly passed booby-trapped ammunition to Islamic insurgent groups, several American veterans and officials said.

As well as exploding bullets, booby-trapped mortar rounds were distributed that would kill insurgent mortar crews at the second they were dropped into the tube. It helped stop the incoming fire on US military positions.

Unfortunately, we won’t be able to provide any information to you about this.

In response to this controversial method of warfare being used in 21st-century wars becoming public knowledge, the Pentagon was asked to shed some light on the legality and methods of distributing exploding bullets.

However, due to the legality of such tactics being very much a grey area, the Pentagon refused to comment on its programs featuring exploding bullets being used in Afghanistan and Iraq.

Use in the Syrian Civil War

In 2012 a New York Times article revealed that the Syrian government was also conducting PSYOP warfare through the use of exploding bullets. Rebel forces in Syria found their ammunition supplies tainted with rounds that explode inside their weapons, maiming and killing the fighters while destroying many of their hard-found arms.

The Syrian government inserts the exploding ammunition into the black markets of the Middle East where rebels acquire weapons. Here it becomes mixed up with ordinary rounds and the original source is almost impossible to trace, especially when the evidence is obliterated when the bullet explodes.

A Case Study of a Survivor

As he fired his Kalashnikov, Muhammed felt an explosion and hit the ground. His face was cut and his hand was a mangled mess of burning flesh and bone. He assumed he had been hit by a shell, but he later found out he had been unlucky enough to load his rifle was an exploding bullet. After recovery, he is back to fighting again but his hand is a mangled mess of what it once was. He tells his story in this excellent video from the New York Times.

Muhammed provided an insight into the effectiveness of the exploding bullets in war and how, over time, they become less effective as the intended targets become wiser to the tactic. ”Rigged cartridges were not recognized by fighters. Now rebels are familiar with the markings on many doctored cartridges and are able to cull them” said Muhammed.

Like landmines, exploding bullets are an equally cruel weapon of war that remain to cause carnage long after the conflict has ended. Once they become lost in the supply chain they can pop up anywhere and won’t go away.

For example, if a shepherd in Iraq or Afghanistan unwittingly buys some ammo that’s been sitting in a stockpile for years in order to guard his sheep, one booby-trapped bullet is all it takes to blow his hand off or take his life.