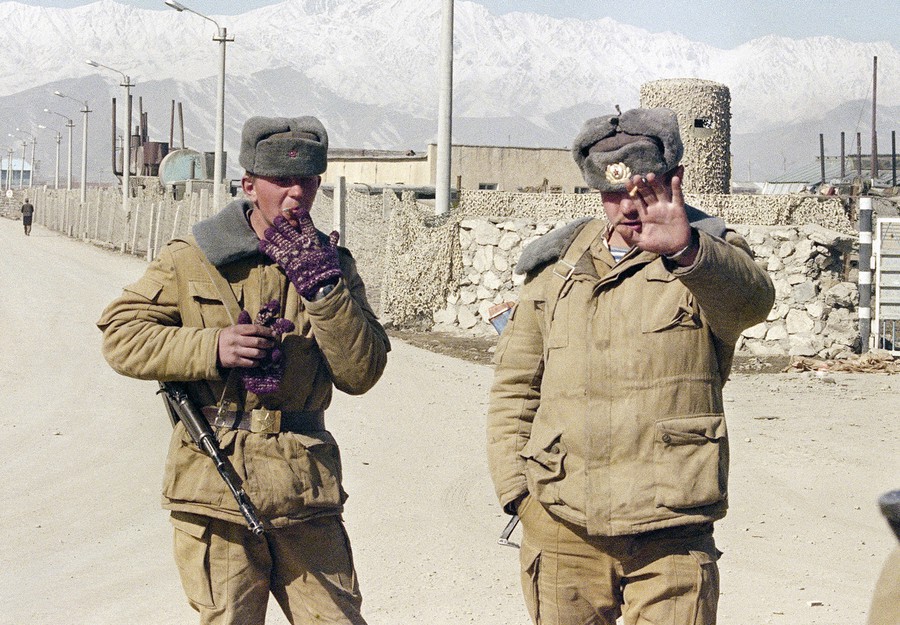 The Song That Never Ends – Afghanistan, nicknamed the graveyard of empires for good reason. Many empires have tried and failed to conquer the wild and untamed mountainous country.

One of the last escapes of the USSR was the Soviet-Afghan war which raged for a decade between 1979 and 1989 during the Cold War. In order to prop up the communist government of the People’s Democratic Party of Afghanistan (PDPA) against a growing insurgency, the Soviet Army invaded Afghanistan but became bogged down in a grueling war against the Mujahideen who were heavily armed with military-grade weapons and equipment by the CIA.

In the horror of the Soviet-Afghan war, a genre of melancholic music was created by the Soviet troops both during and after the war commemorating the bloodthirsty battles, fallen comrades and anger against the authorities who sent the men to the godforsaken land. The following is Reaper Feed’s selection of some of the very best Afghan War songs with English subtitles:

This song is about a Soviet soldier whose legs are obliterated in battle, all of his friends have been killed and he’s down to his last round and fighting to the last breath against the Mujahideen.

When he’s finally out and the enemy surrounds him, they crack him in the face with their rifles. The soldier gives one last, bloody smile before pulling the ring on his grenade and killing himself and the surrounding Mujahideen

4. Farewell to the mountains

This song is dedicated to the somber end to the Soviet-Afghan War. The lead singer details a bitter affection for the land and decrees that the ancient mountains, who have seen the footsteps of many empires, know best and fate has played its hand. The singer pleads that history judges them fairly and not by ”armchair scholars”

This song is sung by a soldier detailing the letter he has written to his sister at home in Russia. He reminds her constantly not to tell his mother he’s in Afghanistan so as not to worry her.

In the Soviet Union, men were called up for military service from the age of 18 after they finished school. When the events in Afghanistan began, many relatives were, of course, afraid that they would be called upon to be soldiers in Afghanistan.

Many who served wrote home that they serve in peaceful places like Belarus and Ukraine so as not to disturb relatives.

In the style of a country and western song and perfect for a road trip through Russia! This is a song dedicated to the drivers of the Kamaz transport trucks. Kamaz trucks are still used by the Russian army today to deliver aid and supplies in Syria.

They are infamously tough and hardwearing trucks that have earned their reputation from the Siberian Taiga to the mountains of Chechnya and are used when there are no roads and bridges available.

Taking the first place on the article The Song That Never Ends is the class Gruppa Krovi or Blood Type by the legendary 1980s Soviet rock band Kino. Readers who can speak Russian could attest to lead singer Viktor Tsoi’s subversively poetic lyrics.

In the 1980s in the USSR, you still had to be careful about projecting anti-government sentiments. The song is dedicated to the blood type that was a feature on the sleeve of every Russian soldier’s uniform.

Gruppa Krovi is sung from the perspective of a Russian conscript in a foreign war that isn’t actually specified, but anybody listening would immediately know it was about the Soviet invasion of Afghanistan, which was still in progress as this song was recorded. Victor Tsoi’s gravelly sounding voice was perfect for this song.

We hope you enjoyed The Song That Never Ends – an article looking at the most iconic songs of the Soviet-Afghan War. For more articles on the unreported side of Russia as well as military history, check out our Russia category!