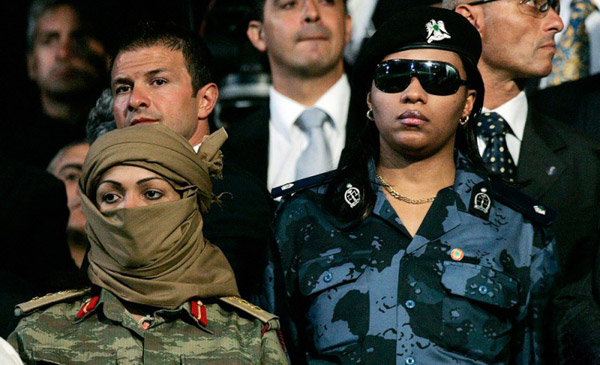 In this article, we’re going to look at one of the wildest attributes and lesser-known Muammar Gaddafi facts, the creation of the Amazonian Guard. An all-female personal army composed of (supposedly virgin) women, heavily armed and trained to protect the ”great leader” at whatever cost in a contract that lasted until retirement or death.

Loved and loathed, Muammar al-Qaddafi was the defining symbol of Libya from 1969 to 2011. Today, he creates a difficult character who, although guilty of countless evil deeds, was the only form of stability Libya had. Post-Gaddafi Libya has been defined by civil war, extremism, and gangsterism.

In the early 1980s as Colonel Gaddafi grew more and more eccentric, he decided to drop the title of Libyan head of state and adopt a far more dictator style title: Brotherly Leader and Guide of the First of September Great Revolution of the Great Socialist People’s Libyan Arab Jamahiriya, try saying that when you’re drunk.

With this brand new title, a brand new bodyguard was needed. Thus, the Amazonian guard was formed. Gaddafi never named the group this however, the name was given to them by Western journalists. The all-female group’s official name was The Revolutionary Nuns. Gaddafi would often travel with around 15 of his Amazonian Guards / Revolutionary Nuns who were either assigned to be his private security guards or those proficient in the art of homeownership were sent to look after Muammar Gaddafi’s palaces.

The group was largely shrouded in secrecy and rumors. Some say that Gaddafi chose a squad of female bodyguards in the belief that an Arab male attacker would find it difficult to shoot at women. However, it has also been said that the reality of the female bodyguards was one of the many aspects of Gaddafi’s infamous eccentric showmanship and his love of surrounding himself with young, attractive women. In a country where the majority of women wear veils and headscarves, these women dressed in high heels, expensive makeup, and wearing gold or silver jewelry. They must have cut a striking image as eccentric as Colonel Gaddafi himself.

Joining the all-female Amazonian Guard was no easy feat. It required extensive training in both martial arts, physical skills, and firearms to the level of international special forces. The women would attend a special training academy and upon completion of training, they would be handpicked by Colonel Gaddafi himself before being made to take an oath of chastity. Many have compared it to an ancient Celtic girls rites of passage.

Gaddafi’s loyalty to his guards was proven when on a diplomatic visit to Nigeria in 2006. After arriving at the international airport in Abuja, Nigeria, with a 200 strong group of heavily armed Amazonian Guards, Nigerian security officials attempted to disarm them. This led to an infuriated Gaddafi deciding to walk the 20mile journey to the capital on foot in protest. The president of Nigeria was forced to intervene.

The uniforms of the Amazonian Guard varied throughout the long years of Gaddafi’s reign. They were often seen in a variety of camo schemes and in the later years some would be seen wearing an Islamic headscarf but many opted for the western style of their hair on show. Many were also seen wearing wear gold or silver military watches that look like Omega Speedmaster but I’ve never been able to find out the specific model.

As the Arab Spring began to spread across the Middle East and North Africa in 2014, the Libyan Civil War erupted between government forces under Colonel Gaddafi and NATO-backed rebel forces. Gaddafi’s response against the Libyan people was ruthless. The rebels gradually began to get the upper hand due to the NATO airstrikes and supplies backing their cause.

As the Libyan civil war closed around Gaddafi and his days became numbered, many of those who once stood by Gaddafi fled. Being by the side of one of the most wanted men in the world was not a good place. With Gaddafi now losing the Libyan Civil War his former female bodyguards began to spill the internal secrets of the group. Many made accusations of rape carried out by the highest levels of the Libyan government including Gaddafi and his sons.

Interestingly, one of those around him during the apocalyptic final days was a Ukrainian nurse who was part of his retinue and suspected to have been one of the last members of his personal harem. After she escaped Libya she spoke to the press about Muammar Gaddafi, whom she called ‘Daddy’ and said he never mistreated her expected any sexual favors in return for all her personal shopping trips that he is said to have funded.

Surrounded by Libyan rebels, Gaddafi was killed on October 20, 2011. His death was as barbaric and quintessential of the Libyan Civil War. The Gaddafi death video showed Libyan rebel fighters beating him to within an inch of his life before raping him with the bayonet of a Kalashnikov before shooting him several times. Images of Gaddafi’s dead body were beamed on TV stations around the world. Hillary Clinton would later relish in the Gaddafi murder exclaiming ‘we came, we saw, he died’ in an interview with CBS News.

At the time of his death, the Gaddafi net worth was estimated to be around. Whilst Libya under Muammar Gaddafi had been a dictatorship, it was stable and prosperous. The death of Muammar Gaddafi plunged the already war-torn Libya into even further chaos and the country remains locked in the ongoing civil war as we speak.

Since the collapse of the Gaddafi regime, the Amazonian Guard has mostly disappeared into the infrastructure. However, some alternative fashion companies like Weird World Wire have used the groups striking image on t-shirts. Giving meaning to the old Libyan saying: The more you take away the more I become.

For a look at where some of the prominent women of the Gaddafi regime are today, there is an interesting article on the Middle Eastern news website Al Bawaba that provides some detail.