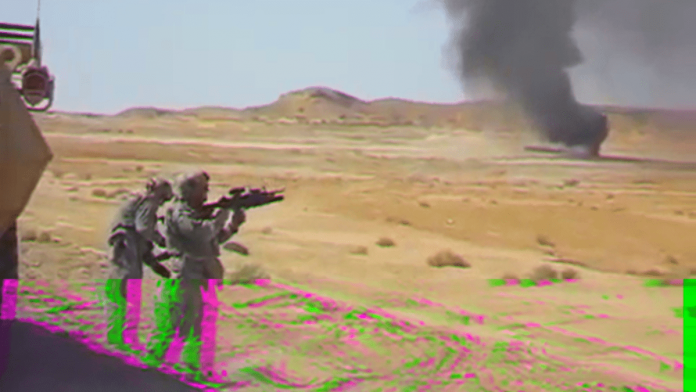 This footage that came out of Iraq in 2006 shows U.S. troops on the side of a highway taking aim at an Iraqi fuel tanker with their standard-issue M203 grenade launcher. Upon a successful impact, the fuel tanker erupts in an almighty explosion. The video presents a prime case study of a wasted opportunity as nobody shouted out ”say hello to my little friend!”. Maybe next time.

The story behind the footage is that the soldiers were tasked with convoy security. The fuel truck was one of the third country nationals (TNC) vehicles that broke down. It was vital that the convoy kept moving. So instead of handing over the fuel to the enemy, the U.S. troops denied that and disposed of the truck and its content with grenade launchers.

“Say hello to my little friend!” – The M203 Grenade Launcher

It’s been seen in action in a string of conflicts from the Vietnam War all the way up to the current war in Syria. Since it began service in 1969, the M203 grenade launcher has gone on to become an iconic weapon of modern warfare.

A replacement of the earlier M79 grenade launcher, the M203 was the only weapon that was part of the U.S. Army Special Purpose Individual Weapon (SPIW) project to actually go into production. The main difference between the M203 and its M79 predecessor was that, while the M79 was designed to be used as a stand-alone weapon, the M203 was designed to be an under barrel grenade launcher attached to a rifle and allow the soldier carrying it to switch between the two weapons with relative ease.

Since the Vietnam War, the weapon has gone on to see service with a string of regular and irregular forces around the world from Albania and Vietnam to South Korea and Israel. It has also seen its fair share of screen time in classic movies. For example, Arnold Schwarzenegger used one to cut down a large portion of the jungle in search of an invisible in the movie Predator. Al Pacino used one to wipe out a number of his rivals in the final scenes of the movie Scarface.

“Say hello to my little friend!”

On the subject of Scarface, whilst many may assume his M203 grenade launcher was illegally acquired like the nearby pile of cocaine on his desk, it’s actually not impossible for a civilian to purchase an M203 in the United States. As it is clearly a non-sporting weapon, under the U.S. National Firearms Act the M203 is classed under “Destructive Devices”.

On the civilian market, a slightly modified M203 grenade launcher can be acquired in certain states. These versions are designed to fire a range of special ammunition such as smoke, flares, concussion rounds, inert rounds, etc.