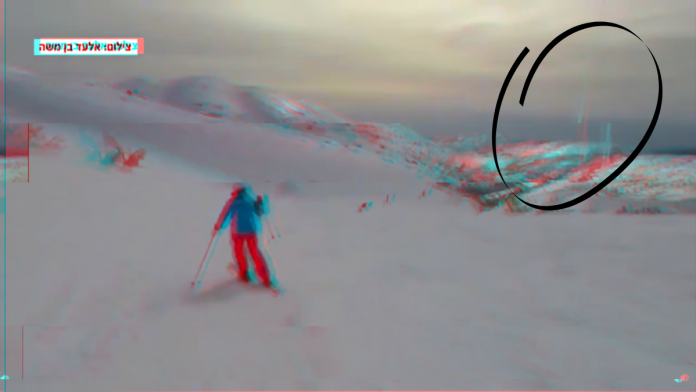 This surreal piece of footage was filmed on a ski slope in the Mount Hermon ski resort which is located a few klicks from the Purple Line, in the Israeli-controlled sector of the Golan Heights. As patrons enjoy a leisurely ski, a Syrian rocket roars overhead before an Israeli rocket fired by the well known Iron Dome system races to intercept it.

The footage of the tranquil ski slope of Mount Hermon being interrupted by a rocket from war-torn Syria presents the stark contrast of life in Israel compared to neighbouring Syria. For Israel, the threat of rocket attacks has been a critical issue of national security for many years. Primarily, rockets would be fired by Hezbollah in neighboring Lebanon or Hamas militants in the Gaza Strip. To combat this, the Iron Dome was introduced.

The Iron Dome is approaching its first decade of service in Israel and has since been exported out of the country to various other nations. A creation of Rafael Advanced Defense Systems and Israel Aerospace Industries, it’s a mobile air defense system that can operate in a range of conditions.

The main aim of the Iron Dome system is to intercept and neutralize short-range rockets fired from distances of 2.5 to 43 miles away and whose trajectory means they’re heading for a populated area within Israel.

It was first deployed on the 27th March 2011 near the Israeli town of Beersheba which is a hotbed for rocket attacks from the nearby Gaza strip. Just ten days later, on the 7th April 2011, it proved its worth when it successfully neutralized a BM-21 Grad rocket that had been fired from Gaza. It would then go on to successfully intercept and destroy thousands of rockets.

Although initially developed as a land-based system, it will not be long until the Iron Dome is deployed in maritime duties where they are predicted to be a vital security tool in the defence of off-shore oil and gas platforms. It’s believed they will be deployed on the future missile vessel of the Israeli Navy: the Sa’ar 6.

The success of the Iron Dome has led to a slow but steady stream of foreign purchases over the past few years. Interestingly, the first foreign buyer was the majority-Muslim nation of Azerbaijan, who purchased the system in December 2016. The reason for this was believed to be a result of Armenia, an enemy of Azerbaijan, having purchased a number of Russian produced Iskander short-range ballistic missiles.

After the first foreign sale to Azerbaijan, in 2017 India signed a $2 billion deal to purchase the defence system. A year later in 2018, NATO member Romania also purchased the system. The U.S. purchased two Iron Dome systems in 2019 in order to protect U.S. military bases operating in hostile areas.

Like all weapons systems, the Iron Dome has its flaws. It is not a foolproof rocket defense system and there have been various debates surrounding the ratio of cost vs effectiveness. For example, the National Interest pointed out that a single ten-foot Tamir interceptor rocket fired by the system costs around $100,000 a piece. Hezbollah alone is believed to possess over 130,000 lethal rockets that can be fired at Israel at a moment’s notice.

– Professor Ted Postol, a critic of the Iron Dome

When faced with mass salvos of rockets, the Iron Dome is known to struggle to knock them all out of the sky. Hamas themselves have stated that their rocket teams launch large numbers of rockets at a concentrated target zone in order to saturate the Iron Domes efficiency. Thus, it is still a work in progress in some respects.