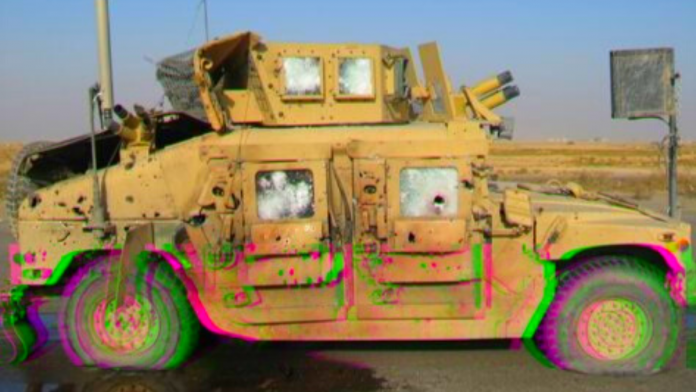 The following combat footage took place during the infamous Battle of Mosul, a battle which we have covered various incidents of well-placed sniper shots such as the one that ricocheted off a journalist’s GoPro camera. It shows a Daesh sniper targeting a U.S. supplied Humvee in service with the Iraqi military. A round soon strikes the ammunition box of the HMG causing it to erupt into a burst of flame.

The Battle of Mosul was concurrent with the Battle of Sirte in Libya and the Raqqa campaign carried out by the Syrian Democratic Forces (SDF) against ISIL’s capital city and stronghold in Syria. As a result, ISIS was on the backfoot and their fighting became ever more desperate and fanatical, as can be seen in the video featured here when an IS fighter dodged death on the streets of Mosul.

The fighting to oust the ISIS fanatics was brutal, prolonged, and fierce. Widespread and elaborate defenses, booby traps, sniper attacks, and the presence of civilians made advancing difficult and slow. But Iraqi forces pushed on and the city was captured from ISIS in July 2017. It is estimated that removing the explosives left behind by ISIS in Mosul as well as repairing the city over the next 5 years will cost around $50 billion.