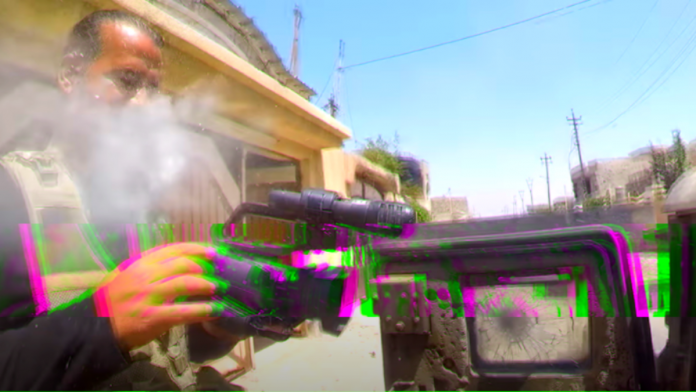 The following combat footage was shot in the war-torn Iraqi city of Mosul when Iraqi forces were fighting grueling urban combat to drive ISIS from the city. It shows an Iraqi journalist named Ammar Alwaely standing in the street as an ISIS sniper takes a shot at him. Luckily, Alwaely survived the attack and the round hit the GoPro Hero camera attached to his body armor and he walked away with just a few cuts from pieces of the GoPro Hero camera being blown into his face.

The hair raising incident of the GoPro Hero saving this journalist’s life was captured on camera by Owen Holdaway, a journalist for The Sun. Mosul in particular was an extremely dangerous area to be working as a journalist during the height of the push to drive ISIS from the ancient city. According to Task & Purpose, out of the 74 journalists killed during 2016, 26 of them where killed in Syria and Iraq whilst covering the fight against ISIS.

The Battle of Mosul was concurrent with the Battle of Sirte in Libya and the Raqqa campaign carried out by the Syrian Democratic Forces (SDF) against ISIL’s capital city and stronghold in Syria. As a result, ISIS was on the backfoot and their fighting became ever more desperate and fanatical, as can be seen in the video featured here when an IS fighter dodged death on the streets of Mosul.

The fighting to oust the ISIS fanatics was brutal, prolonged, and fierce. Widespread and elaborate defenses, booby traps, and the presence of civilians made advancing difficult and slow. But Iraqi forces pushed on and the city was captured from ISIS in July 2017. It is estimated that removing the explosives left behind by ISIS in Mosul as well as repairing the city over the next 5 years will cost around $50 billion.