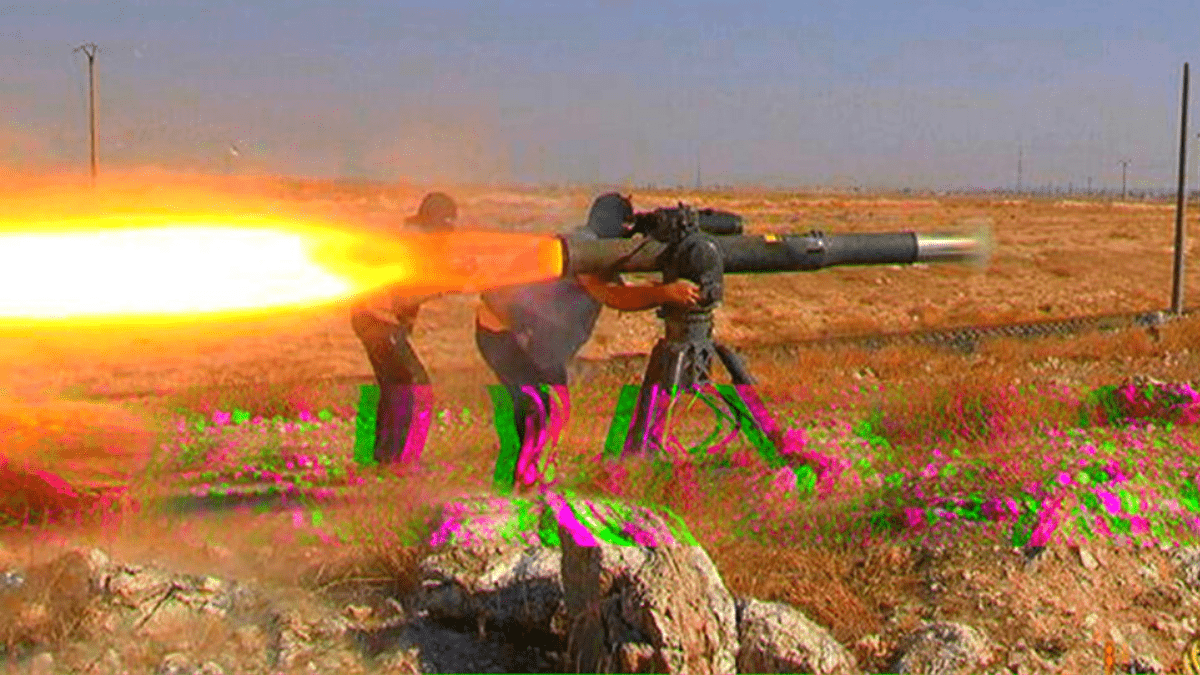 This combat footage was captured in the suburbs of Southern Damascus in the winter of 2015. It shows a leather jacket clad Syrian rebel TOW gunner engaging multiple SAA tanks. The rebel dodges death as a Syrian Arab Army tank launches a shell that detonates right next to him. The rebel returns fire and scores a direct hit on the tank that almost killed him seconds before.

Initially produced by the United States in 1970, the BGM-71 TOW stands for “Tube-launched, Optically tracked, Wire-guided”. This anti-tank missile was made to replace smaller missiles such as the SS.10 whilst providing a more lethal warhead, around double the effective range, and an improved guidance system that could also be used at night thanks to the use of infrared technology.

In the years since it was released, the TOW gunner has become a prominent feature of modern warfare in conflicts around the world. Today, it remains one of the most common anti-tank guided missiles and is often seen being operated manually, mounted on a technical, or fitted to a helicopter.

Syria is one of the many recent conflicts to feature the TOW weapons system. The earliest recorded appearance of the weapon was in April 2014. This was when two videos appeared online showing Free Syrian Army rebels operating BGM-71 TOW systems with the serial numbers scratched off.

“Your mistletoe is no match for my TOW missile!”

Santa in the Xmas Story episode of Futurama.

The weapon has even made appearances in popular culture such as in the U.S. cartoon Futurama, when it was used by Santa Claus on his rampage of destruction and mayhem on Xmas Eve in the Futurama episode “Xmas Story” (2ACV04).

Just under a year later in February 2015, the Carter Centre documented that 23 rebel groups on the Southern Front of the Free Syrian Army were confirmed to have been using TOWs supplied by the U.S. government. The catch to being supplied these weapons was that the rebels were required to document the successful actions of their TOW gunner kills by filming their use as well as saving the spent missile casings.

The U.S. was not the only supplier of TOW weapons systems to Syrian rebels. In October 2015, Saudi Arabia delivered 500 TOW missiles to anti-Assad rebels. Many of these weapons soon fell into the hands of radical Islamist fighters such as the Islamic State and al-Qaeda.

The weapon was also used numerous times against Russian military forces operating in Syria. On the 24th of November 2015, a video surfaced online of a TOW gunner aligned to the Free Syrian Army 1st Coastal Division firing a missile at a downed Russian Su-24M helicopter on the border of Syria and Turkey. Luckily, the helicopter’s crew had retreated when the missile struck.