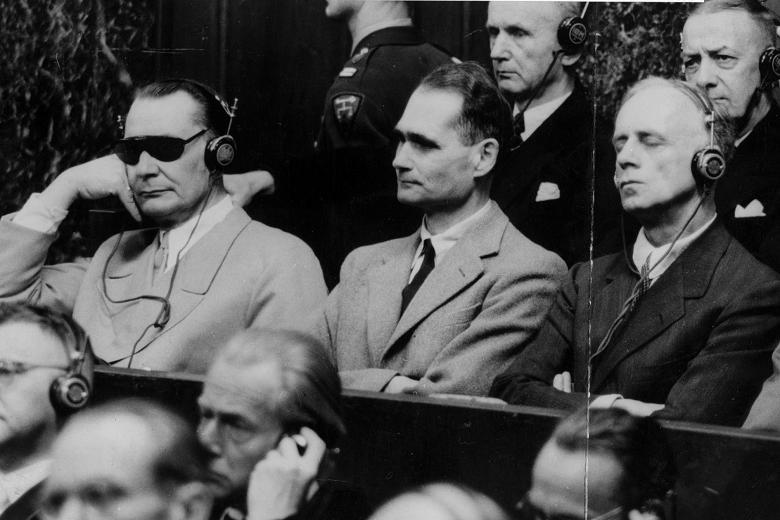 Recently one of our readers in the US contacted us with a photo of a pair of sunglasses that were in a box in his grandfather’s garage. Back in 1945, his grandfather was stationed in Germany for the infamous Nuremberg trials, during which he got his hands on a pair of sunglasses allegedly worn by a high ranking Nazi. Many may be confused as to why sunglasses would be worn inside a courtroom, so we’re here to explain just why sunglasses were worn at the Nuremberg trials and provide the answer to one of the lesser-known Nuremberg Trials facts.

In the aftermath of the horror of the Second World War, the Nuremberg trials were held. These trials were aimed at bringing war criminals from the Nazi regime to justice. Nuremberg was the former propaganda center of the Third Reich and the birthplace of the infamous, anti-semitic Nuremberg Laws. It was also home to the infamous Nuremberg rally and as such was symbolically chosen as the location for the trials.

The Military Grade Travel Guide provides the skills for you to stay safe in hostile environments at home and abroad. Life-saving advice for the price of a coffee:

The 13 trials lasted between 20th October 1945 and 1st October 1946. The defendants were comprised mostly of Nazi Party members, political leaders, and high ranking members of the German military as well as a range of industrialists, doctors, and lawyers. The charges brought against them included crimes against humanity.

After WW2 the Nuremberg courthouse was one of the only buildings left intact in the war-ravaged city and the Nuremberg population had been devastated. In the aftermath of the most devastating war in human history, the Nuremberg trials were treated as the finale, and journalists from around the world flooded into Nuremberg to cover the trial. US forces began to transport over 1,100 tonnes of evidence needed for the trial needed a convoy of lorries and an army of archivists and secretaries.

Iconic images from the trial show infamous figures like Hermann Göring and Rudolf Hess sitting in the dock wearing unique pairs of sunglasses. Many people often jump to the conclusion that this was done to hide their emotions when shown evidence of concentration camps and other atrocities, however, their conscience didn’t extend that far and the glasses were for other reasons.

Firstly, the aim of the Nuremberg trial was to hand out justice to the perpetrators of Nazi crimes in front of the entire world, in the hope that it would prevent it from ever happening again. To achieve this, it required continuous filming for every second of the trial apart from the actual sentencing. Impeccable record-keeping and free press access were also needed.

In 1945 and 1946, filming for prolonged periods under low light conditions such as the Nuremberg courthouse was incredibly difficult. To achieve accurate reportage, the press needed powerful floodlights, and flash photography aimed almost entirely at the dock and the witness stand. The accused were given US issue sunglasses to cope with the glare and to alleviate the pressure on their eyes.

Secondly, the 216 days of argument and debate soon became tedious, apart from the occasional tragicomic or sensational moments. The accused former inner circle of the Nazi regime took advantage of the sunglasses they were given and began sleeping during the trial without the judges or the guards being able to notice them.

At the end of the trial, 10 major members of Nazi Germany’s leadership were hung for their crimes. Others, like Hermann Göring, committed suicide in their cells before they could be brought to justice.

The sunglasses in our reader’s possession are guaranteed to be worth a lot of money. But fortunately, he’s rightly decided to keep them as a part of his family history. His grandfather has passed away but would often regale stories to him of his service during WW2. After his shift at the trials, he would take evening strolls around the Nuremberg Rally Grounds, up to the Nuremberg Castle, and along the Nuremberg River. Interestingly, he noted the arrogance of many condemned Nazis and their refusal to admit that they had done anything wrong.

Whilst the Nazi era leadership had mostly been killed during the Nuremberg executions, many who had previously fought under the banner of the 3rd Reich found a place for themselves in wars that erupted after WW2. You can read about it in our groundbreaking article: 8 Wars That Featured Former Nazi Soldiers.