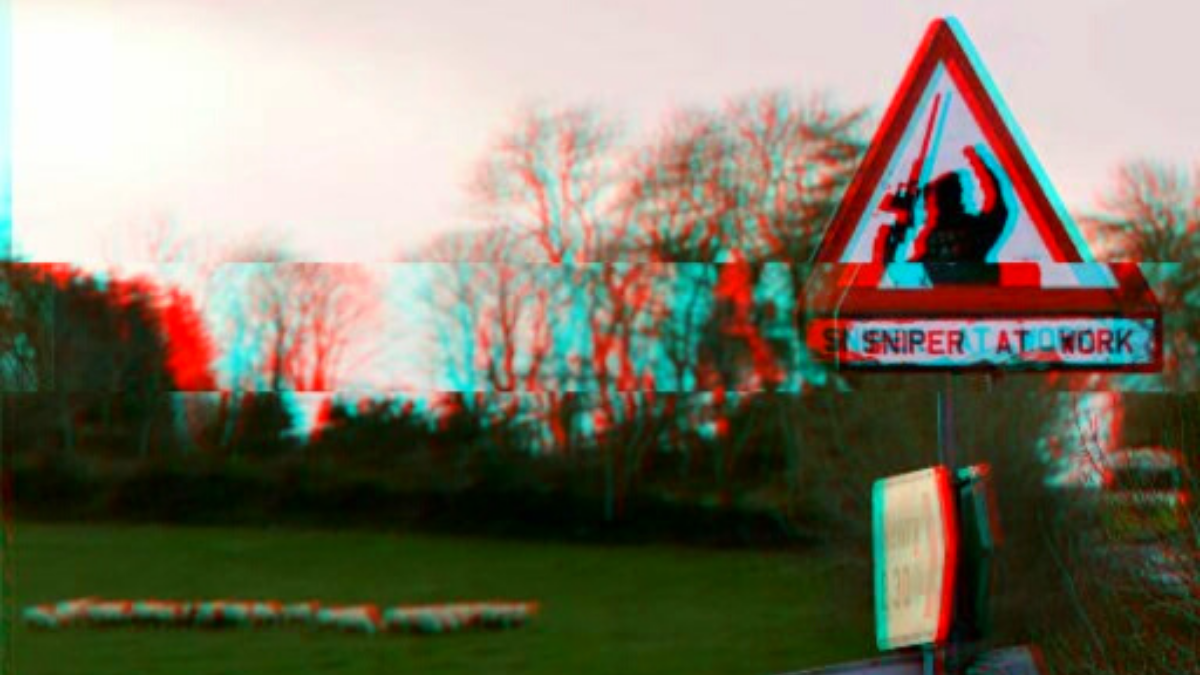 A few years ago, I was in Northern Ireland hanging out with former paramilitary leaders of the IRA and UDA in order to gain a better understanding of the conflict. You can read about those experiences here. But whilst I was in South Armagh, I noticed an infamous sign depicting a balaclava-clad sniper that had been slightly modified. Whilst it once read ”Sniper at Work”, it now reads ”on hold”. Both variants symbolize different eras of the troubles in Northern Ireland.

The sign dates back to the height of the conflict in Northern Ireland. It was erected by the IRA in dedication to the infamous South Armagh Sniper which was part of the IRA South Armagh Brigade. For seven years between 1990-97, the brigade carried out a sniper campaign against British security forces often using a .50 BMG Barrett M-82 rifle.

Throughout the Troubles in Northern Ireland, the use of snipers was a tactic heavily employed by the IRA to lethal effect. In my first job in the UK, I worked with a few former British soldiers. One of whom sported a gruesome bullet wound in his leg. Whilst on patrol, an IRA sniper had fired at him before disappearing through holes knocked through the walls of a row of terraced homes. The bullet ricocheted up his leg and exited through his groin.

Between 1971 and 1991 in Northern Ireland, around 180 British soldiers, Royal Ulster Constabulary (RUC) officers, and Prison staff were killed by IRA snipers. At the time, the IRA was largely using the AR-18 Armalite rifle in their various sniper attacks.

Throughout their various assessment of the Conflict in Northern Ireland, British security forces grouped the sniper attacks into four different groups which became increasingly more deadly as the conflict went on. The last of the four groups was the South Armagh sniper.

Throughout the 1980s, the regime of Muammar Qaddafi in Libya was one of the primary sources of smuggled weapons for the IRA. The reason being Gaddafi was trying to destabilize the West by funding violent paramilitary activity against it. But another weapon route was from sympathizers in the United States.

IRA member George Harrison was one of the main IRA gunrunners between the USA and Northern Ireland and responsible for that specific route of gun smuggling. When George Harrison was arrested by the FBI in 1981, this route was heavily disrupted. However, the weapons flow still continued albeit in smaller numbers. In the late 1980s, this route allowed the IRA to obtain Barrett M82 and M90 rifles made in the USA.

Although many were intercepted, some made it through. It was said to be worth a small fortune to whoever succeeded in smuggling one of these rifles to the IRA. The reason the Barrett rifle was so sought after was due to development in British body armour which provided good defence against 7.62mm rounds fired by the standard IRA weapons like the Kalashnikov or the Armalite assault rifles. Thus, a more powerful, armour piercing weapon was needed.

Despite being called the plural term of South Armagh Sniper, the threat consisted of two four-man sniper teams carrying out their deadly operations in the East and West areas of South Armagh respectively. Alongside four key members, the teams could expand to up to twenty people employed in supporting roles such as scouts and drivers. Scout cars were utilized to escort IRA vehicles and provide advance warning of security checkpoints ahead.

What’s special about the Barrett is the huge kinetic energy. The bullet just sails through the body armor. South Armagh was the prime place to use such a weapon because of the number of British soldiers. They came to dread it and that’s what made it so effective.

– An unidentified leading figure inside the IRA sniper campaign, quoted by Toby Harnden.

The first eight sniper operations carried out by the South Armagh Sniper missed. However, they became more of a threat as time went on. By 1997, 9 members of the British security forces had been killed by the .50 BMG rounds. One of whom, an RUC officer, almost had his leg torn off by a Barrett .50 BMG round.

Despite the Barret having an effective range of 1 kilometre, the IRA often carried out their sniper attacks at under 300 metres from their target. It’s believed that sixteen of the South Armagh Sniper operations were launched from the rear of a discreet vehicle that was a key example of IRA improvised weapons. It was fitted with an armour plate to protect against incoming fire. The effectiveness of this was demonstrated after the killing of a British soldier in an area called Forkhill on 17 March 1993. British troops subsequently opened fire on the sniper’s vehicle, but with no effect.

On the 12th of February 1997, the South Armagh Sniper teams claimed their final victim: Lance Bombardier Stephen Restorick who was tragically the last British soldier to die as a result of enemy fire in the conflict in Northern Ireland. The killing shocked the public leading to Gerry Adams writing a letter of condolence to Restorick’s mother.

The capture of the South Armagh Sniper brought some sense of relief and justice to the British Security Forces. It was arguably the most significant victory against the IRA in the past ten years of the conflict. However, just under two years after the arrest, the Good Friday Agreement was signed. As a result, the men of the captured South Armagh Sniper team was released alongside thousands of other militants. Their respective sniper team was never caught.

Overall, the South Armagh Sniper operation carried out by the IRA was one of the most successful operations of that era of the troubles. The high power capability of the Barrett rifles posed a significant threat to British security forces and helicopters, forcing both to limit patrols and thus allow the IRA more freedom of movement.

As the Good Friday Agreement coming into effect, the “sniper at work” sign erected by the IRA was adapted but not removed. In the following years, it read ”job-seeking” or ”on hold”. The latter of which I saw during my travels to Northern Ireland. Let’s hope that it stays that way.