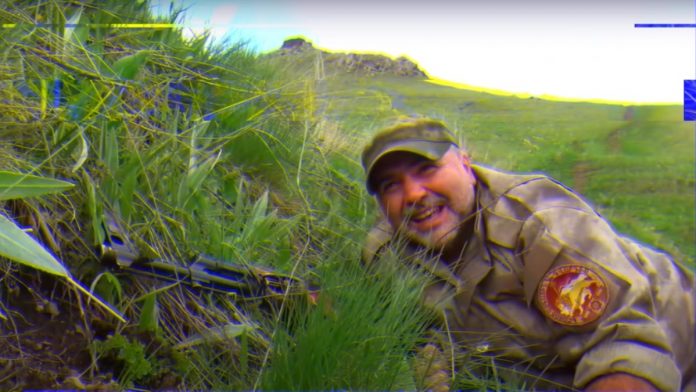 This graphic combat footage was filmed on the Armenian Azerbaijani border. Although the region was recently engulfed in a renewed conflict between both sides, this footage was filmed in 2017 when Arshak Zakaryan, his cameraman Davit and a military escort came under sniper fire as they were en route to film a military documentary.

The group became pinned down by sustained sniper fire that can be heard coming closer and closer until Davit is hit by a bullet through both legs. The ordeal lasted over three and a half hours, this is a segment of the most intense part. I admire his optimism regarding his gunshot wound: “It could have been worse”.

The cameraman hit with the sniper round took his injury very well. He stayed calm and composed. However, being shot could possibly have been avoided had he listened to the advice of his highly composed Armenian military escort who was calmly laying down covering fire with his Kalashnikov until help arrived.

The military escort made his objective criteria clear and advised him where to take cover in order to make it harder to kill them. Despite the escort communicating threats to the cameraman concerning the bend in the road, he went Maverik and was subsequently shot.

They broke both of my legs, but fuck ’em.

Another faux par in the video is the cameraman wearing military fatigues despite being in a journalist role. This is something I’ve personally seen being done by independent journalists in Donbass, Eastern Ukraine.

When gunmen on the opposite front line see a camouflage-clad figure in their kill zone they will shoot first and ask questions later. Non-combatants wearing camouflage on an active front line is a beginner’s error if I ever saw one. But regardless, like most Armenians I have met, Davit is one tough man.

Why are Armenian and Azerbaijani forces fighting?

By the spring of 1994, Russia had stepped in to negotiate a ceasefire and ethnically Armenian controlled Nagorno Karabakh became one of the four frozen conflict zones that are dotted across the former Soviet Union (the others being Transnistria, Abkhazia, and South Ossetia).

However, Azerbaijan still claims that the territory of Nagorno Karabakh is theirs and since then there has been a string of violence and ceasefire violations such as the one in this video and the conflict that raged towards the end of 2020 that again killed thousands and displaced many more.

For unfiltered, uncensored combat footage from the heart of human conflict around the world be sure to check out the Reaper Feed Combat Footage department. For our on the ground reportage from global warzones check out our Frontline Dispatch articles.