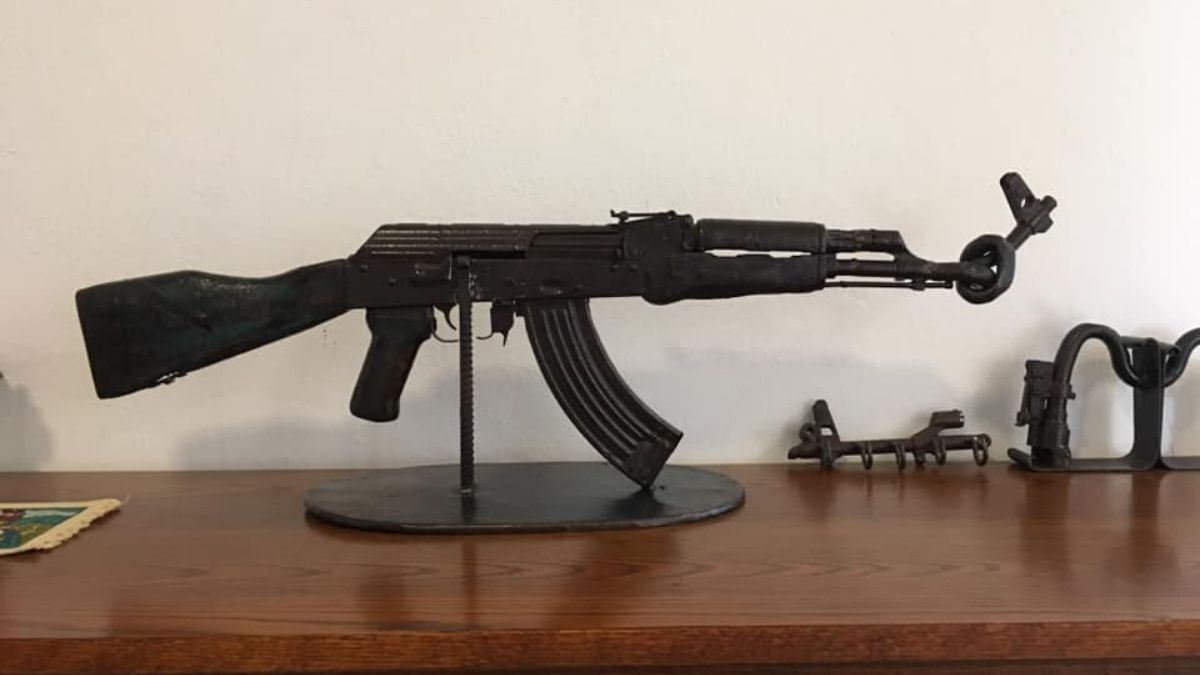 Liberia is Africa’s oldest running republic and the continent’s first republic to proclaim its independence. However, the west African country is infamous for the gruesome civil war that tore through it from 1989 to 2003. The war featured child soldiers, cross-dressing rebels, and cannibal warlords. Such a long-running and barbaric war left behind literal tons of battlefield waste in the form of the weapons and ammunition that claimed the lives of over 250,000 people. Thrifty Liberians have since repurposed these killing machines into a form of home decor with a deadly twist.

One of our Reaper Feed readers is currently deployed in Liberia and was kind enough to send us through these four photos of war-themed home decor he spotted in his day to day life in the country. Liberia is a place where you can easily pick up a coat rack made from old RPGs for around $70. According to our reader, who chose not to be named, these are commonly found in the various markets dotted around Monrovia.

Liberia is littered with Russian AK parts (and other variants). It’s not difficult to find one of the many hundreds of discarded or destroyed AK 47 that have been turned into works of anti-war art. Like this one with the barrel tied in a knot decorating a desk at a hotel in Monrovia. Because nothing says ”welcome!” like a deactivated killing machine. The weapon is deactivated by removing the AK47 firing pin.

I was happy with my bookends that make my book collection look like they’ve been pierced by a Samurai sword. That was until I saw the AK47 bookends that you can get in Liberia. It still maintains the Kalashnikov range finder. Fun fact: many drugged up Liberian rebels thought the range finder was in fact a ”power gauge” so they turned it up to the maximum, obliterating any chance of accuracy they had. Reports of this bizarre tactic were also seen amongst rebels in other wars across Africa such as the Rhodesian Bush War.

Ok, it’s not as portable as a regular Africa sun compass, but it’s still damn cool! This Africa sun compass forms part of the home decor in Monrovia and is made using the spike bayonet of a Chinese made under folder AK47 sitting on two AK47 magazines.

Stealing the place at number one is my favorite Liberian home decor by far: an RPG coat rack made out of a number of discarded Rocket Propelled Grenade launchers! The coat hooks themselves look to be made from the carrying handles of PKM general-purpose machine guns. These awesome pieces of home decor can be picked up around the Liberian capital of Monrovia for around $70.

This article is not intended to make light of the war in Liberia but to highlight the ingenuity of those who survived it and managed to turn weapons of death and destruction into an opportunity to make an income. The Liberian Civil War was one of the most inhuman conflicts to ever plague Africa. Child soldiers, sexual crimes and cannibalism were defining features of the conflict. You can read more about the war in our article: Liberia – an Uncivil War.