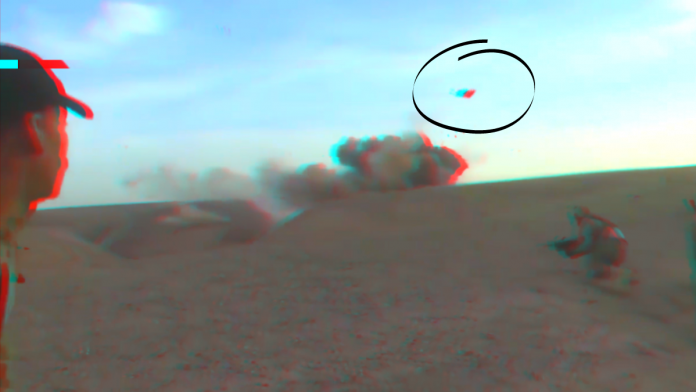 Blown through the roof: This piece of combat footage is believed to have taken place in the Anbar province of Iraq. It covers an Iraqi Special Forces operation tasked with mopping up ISIS fighters hiding out in the desert.

As the Iraqi operators surround an ISIS tunnel, a hand grenade is thrown which then appears to trigger a suicide vest an ISIS fighter is wearing causing him to fly through the air.

Another explanation for the blast that caused the militant to be blown through the roof is that the hand grenade triggered an ISIS stockpile of explosives stashed in their hideout. As a result of the barrage of sustained gunfire that followed the blast, it’s unlikely that any of the ISIS militants were taken alive.

It’s interesting to see the development of Iraqi forces compared to the years leading up to the rise of IS in 2014. Since then, coalition forces have invested immense amounts of training in order to combat the threat of Daesh.

The soldier’s tactics in the video are very much Western-style from the maintenance of prone position, fire control, and even the very effective throw of the hand grenade that caused the ISIS fighter to be blown through the roof.

The Iraqi operator who threw the hand grenade, as well as the soldiers alongside him, likely belong to the Iraqi Special Operations Forces also known as the Golden Division. Trained and supervised by US forces in Iraq, The men of the Golden Division were handpicked all the way from commander to soldier and are considered the best special forces unit in Iraq.

An article by War on the Rocks fittingly labeled the Iraqi Golden division as ”The best thing America built in Iraq”. Following the ISIS onslaught in June 2014, the Iraqi Army and police forces largely collapsed and since struggled to regain the trust of the Iraqi people. The Golden Division, however, was a case study of succesful multi-ethnic and cross-sectarian nationalism. As a result, it managed to be largely successful in maintaining the trust of the Iraqi people throughout the ISIS reign of terror.

During the infamous Battle of Mosul that began in October 2016, the Special Operations Forces of Iraq were some of the first Iraqi units to enter the city, which had been gripped in the brutal reign of ISIS since it was captured early on in 2014. The unit played a large role in the liberation of the city on the 10th of July 2017.

The appreciation for the success of the Iraqi Special Operations Forces was praised by Mick Mulroy in July 2019. Mulroy was the former United States Deputy Assistant Secretary of Defense for the Middle East and proclaimed that, with the support of US forces, allied Iraqi Forces had liberated an area the size of West Virginia from the grip of ISIS. The Iraqi Special Operations Forces were specifically highlighted as a leading force that made it possible to achieve this.

In 2014, three years after the US pulled most of its troops out of Iraq, the largely decentralized JWT split from al-Qaeda and launched the largely centralized ISIS. The group declared itself a worldwide caliphate with religious, political, and military authority over all Muslims in all corners of the world. Whilst many Islamic terror groups had declared similar, ISIS put it into practice when they launched a lightning offensive across Iraq and Syria that overran US-trained Iraqi forces and the already embattled Syrian Army.

As well as capturing significant cities such as Mosul and Tikrit, the terror group also captured oil refineries, hydroelectric dams, and border crossings. By December 2015, the terror group held territory home to around 12 million people.

The success of ISIS attracted fighters and allies from all over the world and soon had terror branches in 18 countries across 4 continents. In its territory, it had over 30,000 heavily armed fighters. Due to the capture of various oil fields, the terror group is believed to have had an annual budget of over $1 billion, which was used to fund its war as well as gruesome terror attacks around the world.