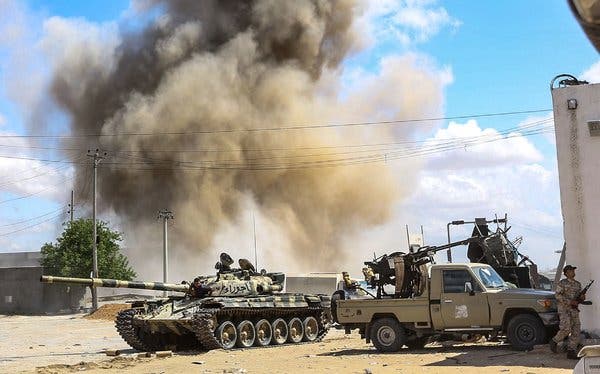 This video was submitted to us by one of our readers who is currently embedded with government forces in the Libyan civil war. It shows a gruesome ambush carried out by fighters of the Government National Accord (GNA) versus what is said to be a convoy filled with fighters aligned with the Libyan National Army under the command of Field Marshal Khalifa Hafta.

The soldiers in the trucks were apparently fleeing a rival Libyan attack from the other direction, the Libyan GNA ambush caught them fleeing and unleashed a barrage of fire into them causing two of the cars to go into a death roll. It’s highly unlikely that anybody who was in the immediate convoy survived.

GNA stands for the Government of National Accord which is an interim government for Libya formed under the terms of the Libyan Political Agreement which was a United Nations-led initiative. The United Nations Security Council recognized the Government of National Accord as the sole legitimate executive authority in Libya. The GNA soon went head to head with the internationally unrecognized LNA.

LNA stands for the Libyan National Army and is a component of Libya’s military forces under the command of Field Marshal Khalifa Haftar. In 2014, LNA launched Operation Dignity, a military campaign against the General National Congress and armed militias and Islamist militant organizations. When the internationally recognized Government of National Accord (GNA) was established in Tripoli, part of the Libyan military forces were named the Libyan Army to contrast with the other part that retained the LNA identity. In the ongoing Civil War, the LNA is loyal to that part of the Libyan House of Representatives that meets in Tobruk. It fights against the Shura Council of Benghazi Revolutionaries, as well as the Islamic State in Libya which is a common enemy for both LNA and the Libyan Army.

Wagner is a foreign force of mercenaries present in the Libyan Civil War. Originally hailing from Russia, the mercenary group has been a feature of various conflicts from Ukraine and Syria to Libya and Chad. It’s estimated that there are up to 1,600 Wagner mercenaries Libya. But as of May 2020, a large scale retreat and evacuation from Libya of Wagner troops have been documented.

What’s the story behind the Libyan Civil War?

Since the death of Muammar Gaddafi in 2011, Libya has been in a state of turmoil The current war ravaging the North African country has been ongoing since 2014 and labelled as the Second Libyan Civil War. It is mainly being fought between the Government of National Accord, led by Prime Minister Fayez al-Sarraj, based in the capital Tripoli and established after failed military coups and the relocation of the House of Representatives to Tobruk, and the House of Representatives, elected in 2014 with a low turnout (18%), relocated to Tobruk, which appointed Marshal Khalifa Haftar as commander-in-chief of the Libyan National Army with the mission of restoring its sovereignty over the whole of Libyan territory.