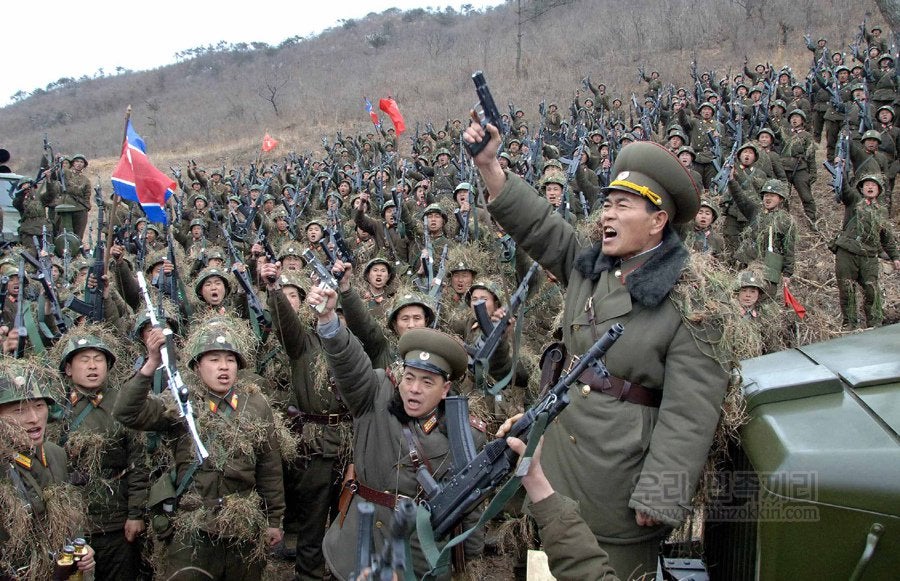 When it comes to North Korea or the Democratic People’s Republic of Korea (DPRK) being provocative is inherently part of the government’s mindset. In the latest addition to our combat footage section, we recently found this video originally published by Rouge State Media which showed fanatical soldiers of the North Korean Army firing at targets designed to look like propagandized US troops.

The shooting range trip took place after the soldiers had been taken on a visit to the Sinchon Museum of American War Atrocities, which no doubt this ramped up their anger. Luckily for them, their commanders had set up a range for them to release the effects of propaganda. The footage captured was an excerpt from the North Korean evening news which usually hosted by a lady with hair like a swept-back black widow anemone.

The weapons used by the North Korean Army look almost entirely to be Soviet-era weapons likely handed over during the Cold War. Weapons from fellow communist countries will come as no surprise. However, at 0:50 seconds into the video, one soldier is manning what looks to be a modified British Bren machine gun which has been chromed but is in fact a North Korean Type 73 machine gun. A far cry from a generic Bob’s gun range!

The Korean peninsula has been divided into North and South since the Korean War in the 1950s. After which North Korea became a communist-style dictatorship under the Juche ideology. The United States has been considered its arch-nemesis ever since and the two countries have been regularly locked in threats to deploy nuclear weapons against one another. But thankfully, all of these escalations have been dealt with diplomatically.

These days, relations are slowly thawing between the two states as talks and negotiations took place between President Trump and North Korean leader Kin Jong Un. This provides some hope for a more peaceful relationship between the United States and the DPRK in the future.

The world of provocative target practice

North Korea isn’t the only side of the peninsula to use target practice as a method of provocation. South Korean soldiers have been known to use images of Kim Jong Un to blast their K2 assault rifles into. Using the enemy’s face for target practice seems to be a form of stress release.

In the UK, the British Army came under fire recently (excuse the pun) when a video appeared showing troops of the Parachute regiment firing their Glock handguns into a photo of left-wing politician Jeremy Corbyn. The video provoked a small uproar in the UK.

For similar articles to this be sure to check out our combat footage department which features video material from global wars, dictatorships, and more!