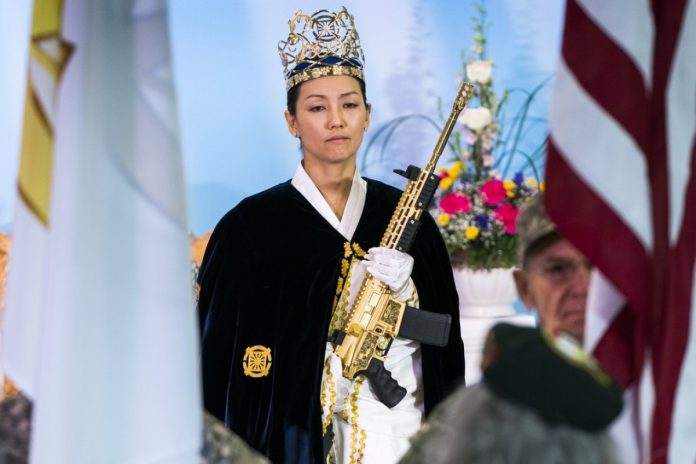 The 1990s were arguably the heyday when it comes to religious cults. That was the era of David Koresh and Waco, Jim Jones and Heavens Gate, and the lesser-known militarised cult led by Shoko Asahara. The majority of the people who followed these cults are now dead but one other has survived: The Unification Church who recently organized bizarre scenes through a mass AR15 themed wedding of its followers. This is the type of wedding ideas Reaper Feed can get behind.

The Unification Church was founded by a religious leader, political activist, and businessman, Sun Myung Moon in South Korea back in 1954. In the years following the Unification Church would spread around the world and eventually become a global religious movement made up of dedicated followers who earned the nickname ‘Moonies’.

In 1966, Sun Myung Moon outlined the group’s beliefs in a book named Divine Principle that is known for its alternative views on Jesus and adherence to the concept of indemnity. The movement is known for mass weddings and unique funerals for ‘Moonies’. The group is extremely right-wing and anti-communist. The Unification Church was heavily active in Cold War politics due to viewing the battle between the East and West as a battle between God and Satan.

During the latter days of the Soviet Union, Sun Myung Moon went to Moscow to meet with President Gorbachev with the aim of setting up finance exchange programs for Soviet students. He struck a deal and managed to bring hundreds on paid trips to the USA. Only English speaking students were picked and almost all of them were subsequently brainwashed into joining the Unification Church.

If you’re wondering how an openly anti-Communist religious cult managed to swing this program in the inherently anti-religious Soviet Union, Moon also pledged to invest in various industrial projects across the USSR. Call it an elaborate bribe. With the Soviet economy in such a dire state during the late 1980s, the government of the USSR largely turned a blind eye to the activities of the Unification Church.

Naturally, the church has been the subject of repeated controversy and has been labeled as a dangerous cult. The movement attracted controversy once again recently when they held a bizarre mass wedding featuring AR-15 assault rifles and crowns made of bullets that took place at a Unification Sanctuary in Pennsylvania.

The church hall was packed with couples dressed in suits, wedding dresses, and elaborate robes and carrying a range of weapons from AR-15 assault rifles to revolvers. The pro-2nd Amendment Unification Church holds the belief that the AR-15 symbolizes the “rod of iron” in the book of Revelation.

“Each of us is called to use the power of the ‘rod of iron’ not to arm or oppress as has been done in satanic kingdoms of this world, but to protect God’s children.”

The mass wedding was held by Reverend Hyung Jin-moon who is the son of Sun Myung Moon. He was joined by his wife Yeon Ah Lee Moon who held a customized and gold plated AR-15 into the air. The event was surrounded by state police and outside saw a gathering of protesters who disagreed with the bizarre event. As far as wedding ideas go, this assault rifle and ammo themed Moonies wedding is definitely up there with the most aesthetic and answers the common question as to are the moonies still around?

In an article with The Guardian, a former unification church member who escaped the moonies cult spoke about his life as one of the ‘Moonies’. They talk about being indoctrinated with the fear of World War 3, Satan, and anybody who dared to criticize Moon. Followers were said to have been made to work for up to 21 hours a day all week. Their roles involved prayer sessions but with the majority of time recruiting new members or spend raising cash for the cult where Moonies were ordered to raise at least $100 daily or they were not allowed to sleep.

If you enjoyed this article on the Moonies and the Church of Unification, feel free to comment, share, and follow us on social media for more news on military history, war aesthetic, and global defense news. Check out our related articles in our United States department.

All photos in this article were provided by the South China Morning Post.