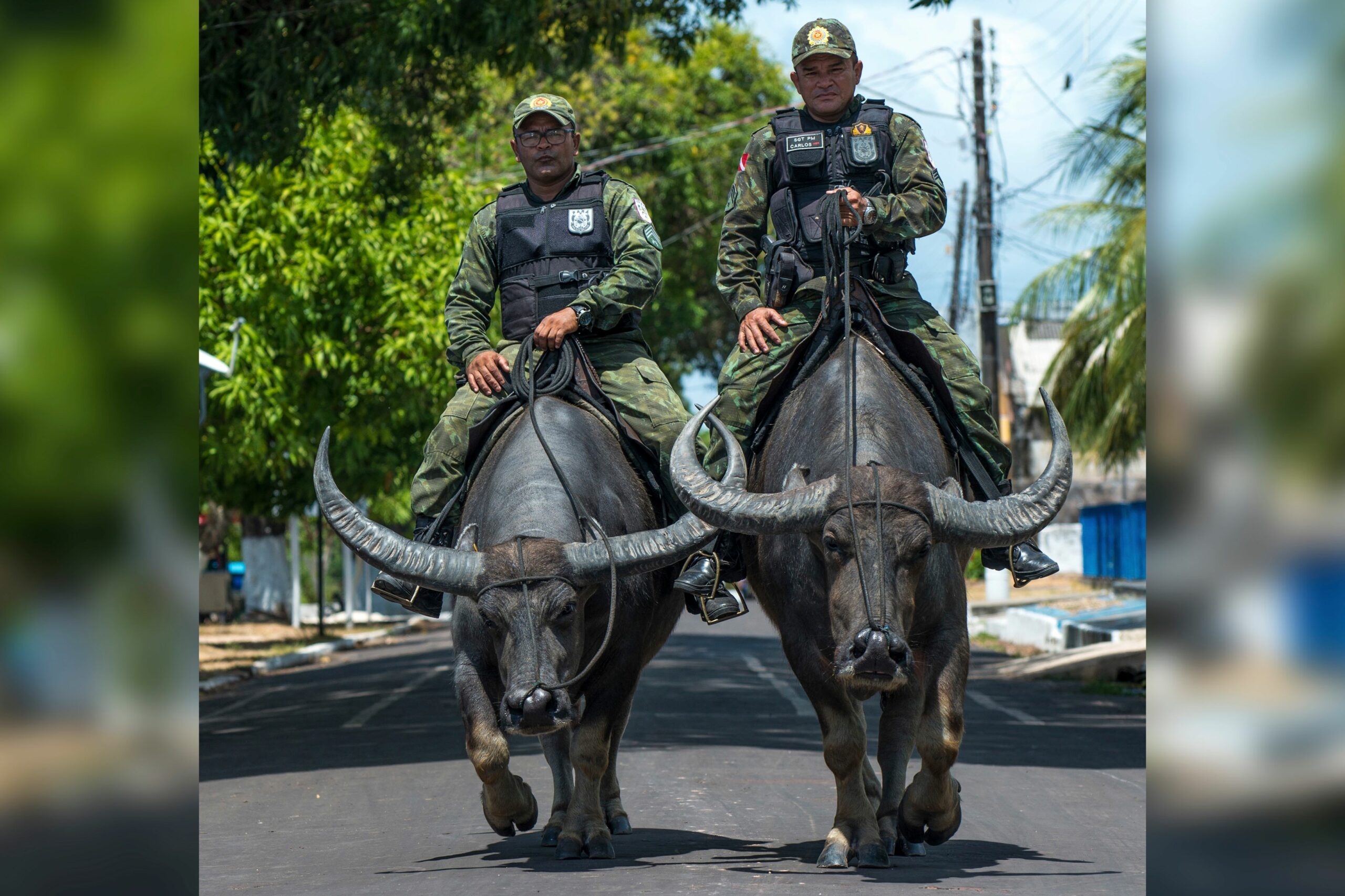 At Reaper Feed we do love a weird form of transport-related to anything military or police, so when we saw this epic photo of the real-life Buffalo Soldiers in Brazil we sat down to give you the inside story on it. Whether you’re a Bob Marley fan or just love bizarre aesthetic images, then you’ll love the water buffalo police of Brazil!

Now, Brazil is an enormous country, 5th biggest country in the world, in fact, so you won’t exactly see Buffalo soldiers patrolling the streets of Rio. They are in fact specific to an Island called Marajo where the 1,000 pound Water Buffalo are traditional forms of transport for the Military Police of Brazil.

Marajo is about the same size as Switzerland and is situated off the Northern coast of Brazil near the mouth of the Amazon. The island is home to more animals than people and is host to almost half a million wild and domesticated water buffalo. The animals are put to work in agriculture, garbage collection, or tasked with carrying soldiers around. The locals of Marajo also race the water buffalo during traditional festivals and, naturally, they enjoy a good buffalo steak covered in cheese made from, you guessed it, buffalo milk!

In 1990 the brazil military police began riding water buffalo on their patrols around Soure which is a laid back town of around 22,000 people on Marajo. Initially, they were tasked with dealing with petty crimes such as breaking up the odd bar fight here and there. I would love to see the reaction of the men in the first bar brawl to be broken up by armed police on horned water buffalo!

As years went on the role of the buffalo soldiers expanded as they were tasked with hunting serious criminals who had fled into the rural badlands of Marajo and was as combating buffalo rustling which was taking place on isolated farms around the island. Buffalo were perfect for this role as they’re excellent swimmers and have an incredible ability to move through muddy swamps due to their unique splayed hooves. Most importantly, the animals are docile making it easy for humans to train and work with them.

Anybody with a sense of geography is wondering why the hell there are so many water buffalo in Brazil when they’re generally indigenous to Asia. Their origin is the subject of conflicting rumors such as their ancestors landing on the island after a cargo boat from Asia was shipwrecked nearby. Upon their arrival, they simply multiplied.

The military police of Brazil can be compared to the state police in the USA, with the difference being that military tradition is incorporated in their appearance and method of policing. In recent years their tactics have been criticized all over the world due to being involved in a series of human rights abuses, disappearances, and killings of people suspected to be innocent. In Rio de Janeiro throughout 2019, the Brazilian military police killed 434 people.

The Brazillian military police riding water buffalo have been nicknamed ‘Buffalo Soldiers’ by journalists and police in Rio de Janeiro after the famous Bob Marley song. The origin of the Buffalo Soldiers in Bob Marley’s hit song was based around the black men of the 10th Cavalry Regiment in the United States Army that was formed in Kansas back in 1866. The Buffalo soldiers were a Native American nickname given to the Black Cavalry who fought in the Indian Wars.

If you enjoyed this article feel free to comment and share as well as check out our related work in the Weapons and Tech department of Reaper Feed: featuring everything from Hellfire Missiles to the Water Buffalo!