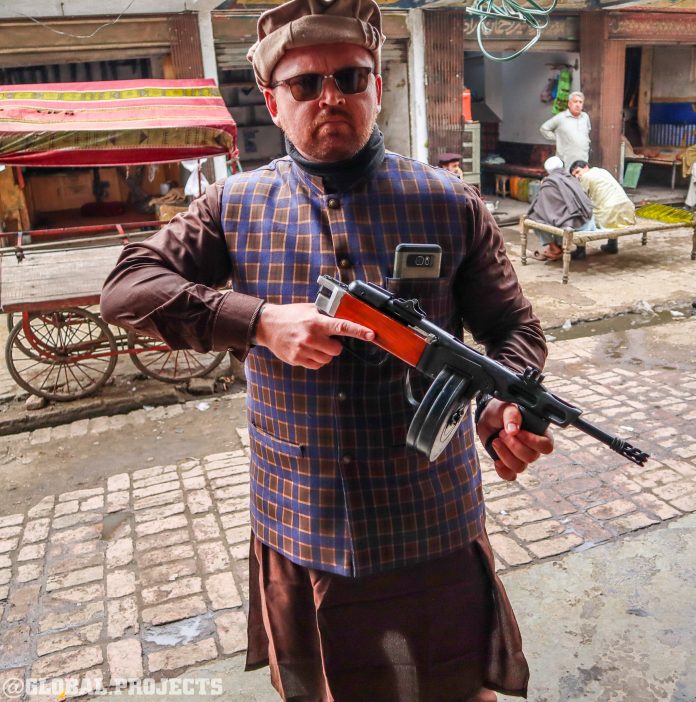 In our extreme tourism series, we look into destinations and adventure trips to some of the wildest parts of the world. In today’s segment, we meet with Aussie backpacker and extreme tourism vlogger Mick Bowman who founded the Global Projects brand has just returned from a stint in the tribal territories of Pakistan visiting places that very few foreigners dare to enter: the infamous gun bazaar at Darra Adam Khel.

As an intrepid traveler from Australia with a passion for extreme tourism and adventure trips, I visited the Islamic Republic of Pakistan in early 2020 and it was a trip I will never forget in this life or the next. After arriving in Karachi and journeying north to the dusty yet bustling streets of Peshawar, I found myself holding a perfect replica of an assault rifle brilliantly constructed by a Pashtun tribesman in a primitive workshop the size of a small bathroom.

After extensive research all about Pakistan, security consulting, and some serious networking with my limited contacts in the region, I messaged a fellow traveler who put me in touch with a bloke originally from Peshawar. After exchanging a few messages on Whatsapp, he was super helpful and accommodating as many Pakistani people are, however, he was due to return to the US prior to my arrival.

Nonetheless, I informed him of my desire to visit the gun markets in the tribal areas south of Peshawar and using his far more extensive network of contacts, he put me in touch with another local who, after some tactful persuasion, agreed to arrange for me to travel to this unique and captivating place.

The village at the center of the arms trade in the tribal provinces of Pakistan is Dara Adam Khel in the province of Khyber Pakhtunkhwa. Located around an hour’s drive south of Peshawar, this little hamlet is home to some of the most artistic folk the world over, the only obvious difference is their art is not in the form of oil paintings on canvas or post-modern sculptures, but high powered automatic weapons, custom-built with exceptional attention to detail and of a standard fit to rival those mass-produced in a fully equipped Soviet-era weapons factory

It’s no secret that the tribal areas are one of the most dangerous states of Pakistan and a constant feature in Pakistani news. It was around two years ago I watched a short documentary on the manufacturing of precision weapons that is the lifeblood of this mesmerizing community and with a keen interest in traveling to Pakistan, I decided I needed to visit Dara Adamkhel and record some video footage to share with my audience.

Travel to the tribal regions of Pakistan is essentially off-limits to foreigners though and not recommended. Why did I go then? Intrigue, curiosity, and fascination to say the least. Unperturbed, I knew I had to fly under the radar and after disguising myself as a Pashtun, decking myself out in a shalwar kameez and pakol hat, and sprouting a few weeks of facial hair growth, I was as much of an undercover tourist as I was ever going to get.

I accepted the risk, however, my local escort assured me the risk was minimal given he had arranged for a national policeman armed with an AK47 and SIG Sauer P226 stuffed into an Emissary gun belt to accompany us and assist with clearing the military checkpoints en route. The gun markets in Pakistan were controlled by the Taliban for years until they were kicked out in 2010, but the area is still high risk and home to militant activity.

After passing through the checkpoints uncontested we arrived in the main street of Dara Adam Khel. There wasn’t much action to be found, but then again this wasn’t exactly Rio during Carnival. A few locals were milling about on the side of the road, stray goats were wandering around aimlessly narrowly avoiding passing trucks, and the sound of automatic gunfire echoing in the distance reinforced the reality of exactly where I was.

I was certainly apprehensive about walking the streets with the camera but my local guide, as a frequent visitor to the region, once again assured me there’d be no drama. As we ventured off the main street there was an arcade that ran perpendicular to the street that housed ten or so workshops lined up on either side. There were no factories with assembly lines or industrial machinery, only small scale workshops equipped with the most basic of tools for producing handmade firearms. Products of a skillset handed down through the generations from father to son.

Upon entering the first workshop, my guide was promptly handed a replica assault rifle with folding stock, manufactured within a week but slightly more expensive with a sale price of US$600. At the workshop next door, I was offered a replica TT-30 semi-automatic handgun for US$100. At another gun shop, I was shown a Flintlock Fowler rifle and even Nazi-era guns alongside a Soviet PPSh 41 for sale. The arms expo on the walls was interrupted by SMG chest rigs, emissary gun belts, 9mm tracer rounds, PPSh 41 drum magazines for sale, and other military equipment.

From seemingly endless firearms to traditional edged weapons like the Kora Sword, as we bounced from workshop to workshop the weapons on display were sufficient to arm an invading force hell-bent on achieving its imperialist agenda. Many were a mish-mash of various weapons pieced together like Soviet Russian PPSh 41s mixed with Bulgarian Kalashnikovs and pistols with a Glock framework but a Tokarev slide. Regardless, they all get the job done.

Handguns, rifles, and machine guns fitted with custom made drum magazines with a capacity of seventy 7.62mm rounds were all available on the spot for a couple of hundred dollars or less, with the cheapest weapon available costing a paltry US$30 had I been keen to purchase on the day.

As we crossed the road to another similar arcade lined with workshops, the explosive sound of test-firing sounded almost too close for comfort. The rat-a-tat-tat of a fully automatic AK47 gunfire continued to echo throughout the village from a field a mere hundred meters away from where Pakistani customers test fire their guns indiscriminately into the air. This was extreme tourism at its finest.

Wiping the sweat from my brow, the next workshop we entered was incredibly well-stocked. A wide variety of old school handguns and rifles were available including a beautifully crafted older style Colt six-shooter revolver like something from an old Clint Eastwood western. Hanging on an adjacent display rack were numerous assault rifles, one of which was placed delicately in my hands. The craftsmanship was exemplary, and at a cost of $400, it was almost tempting to buy it and spend the day in the field taking potshots at targets before returning it at sunset.

I continued to film without any problems, having declared I would respect the privacy of the gunsmiths and blur their faces when editing the footage. They seemed satisfied with this, though the tension in the air was palpable, and whilst I was not on the receiving end of any direct hostility, some words were exchanged in Pashto and it was clear our prolonged presence may have upset some of the locals. Subsequent to this, my guide advised it was time to make haste and return to Peshawar before any less tolerant locals turned up who may have taken offense at an uninvited foreigner setting foot on their turf.

The armed policeman never strayed far from my side, refusing to allow me to be more than ten feet away. Was I in more danger than I realized? Had the risk been downplayed by my guide? As an outsider, it was difficult to ascertain, but by gauging the suspicious looks I was receiving since I got out of the car and the body language of my escorts, I concluded that, despite getting out of there without any commotion, it was still a dangerous place for me to be and the atmosphere was like some war correspondents must feel often.

We’d been there for around thirty minutes which was sufficient to explore a number of workshops and inspect some of the weapons, and by this time I felt I had worn out my welcome at this Pakistani arms expo and staying any longer would be a forward risk. On the drive back I was still in awe of the supreme quality of the weapons produced by the people of Pakistan in such an antediluvian environment. From the rudimentary tools to the basic methods of manufacturing, it was a truly memorable experience to see it with my own eyes and live to tell the tale.