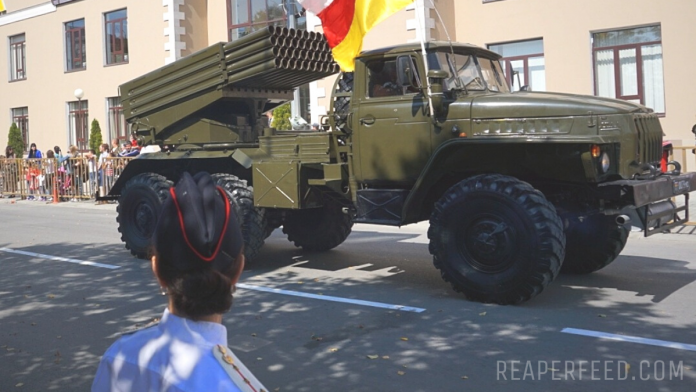 Grad, Russian for ‘Hail’, is the name given to the BM-21 multiple rocket launcher system (MLRS). The precursor to this weapon was the infamous Katushya in WW2. Multiple rocket launchers like the Grad deliver explosives to a target area more quickly than conventional artillery, but with lower accuracy and requiring a longer time to reload. They are inexpensive, easy to produce, and usable on any chassis. The weapons are known for the unique sound they make when fired. In WW2, the Germans nicknamed this sound ”Stalin’s Organ”.

Most of the time, footage of Grad systems shows a flurry of rockets being launched at rapid speed. Evidence of the impact is largely a blur of multiple explosions like the CCTV from the Grad attack at Volnovakha. However, this footage from Syria is a useful case study of the damage that is caused by just one single Grad rocket. It was fired by fighters of the Free Syrian Army (FSA) against soldiers of the Syrian Arab Army (SAA) holed up in a fairly high rise building during the battle for Aleppo in 2014. The iconic scream of the Grad rocket can be heard loud and clear.

I’ve traveled all over Russia and the former Soviet Union whilst working as a security advisor. As a result, I’ve seen various Grad launchers and Katyushas featured at military parades as well as being used on the frontline in places like Donetsk in Ukraine.

Interestingly, the Grad multiple rocket launcher and related weapons can trace their roots back to the 15th century. Leonardo da Vinci actually perfected a similar machine as did the Corsican conspirator Giuseppe Fieschi with his Machine Infernale that was used in the failed assassination attempt on King Louis Philippe I of France in 1835. Interestingly, Fieschi was honored in a religious service at a Moscow church due to his weapon design having influenced the Katyusha rocket launcher.

As a replacement for the Second World War-era Katyusha, the BM-21 launch vehicle (122 mm multiple rocket launcher (MRL) system) was adopted by the Soviet Army in 1963. The launch vehicle consists of a Ural-375D six-by-six truck (later replaced by the Ural-4320) chassis fitted with a bank of 40 launch tubes arranged in a rectangular shape that can be turned away from the unprotected cab.

The Grad MLRS is manned by a crew of three. After sufficient training, it can be deployed and prepared to fire in about three minutes. For sighting the targets, the weapon is fitted with A PG-1M panoramic telescope with a K-1 collimator. The rocket system can then be fired via two ways: from the cab or through a trigger situated at the end of a 210-foot wire. The latter is preferable if you value your ears.

The forty rockets held by a fully loaded Grad can all be rapidly fired in 20 seconds. However, there is also the option to fire individual rockets or groups of rockets at intervals of several seconds. The system is reloaded manually and this can take about ten minutes. To counter the threat of counter-battery fire, the crew of a BM-21 can pack up and move out in around two minutes.

The 20-kilogram rockets fired by the Grad are 9 feet and 5 inches long. As the Grad fires, the rockets spin in the rifled firing tube which, combined with the primary fin stabilization, keep the rockets stable and on course. The maximum range of the rockets (fitted with high explosive-fragmentation, incendiary, or chemical warheads) is about 12 miles. However, newer rockets that are used to drop anti-personnel or antitank mines are believed to have the ability to fire over distances of 19 miles.

It’s not as precise as traditional artillery, but due to the number of rockets it can rain down upon the enemy in quick succession makes the BM-21 Grad a devastating weapon. For example, just one battalion of Grad launchers (which numbers 18 weapons systems) can launch a volley of 720 rockets in the space of a few minutes before driving to another position.

For more articles like this as well as photography from the more bizarre sides of human conflict, you can stay up to speed with us on Instagram and Twitter.