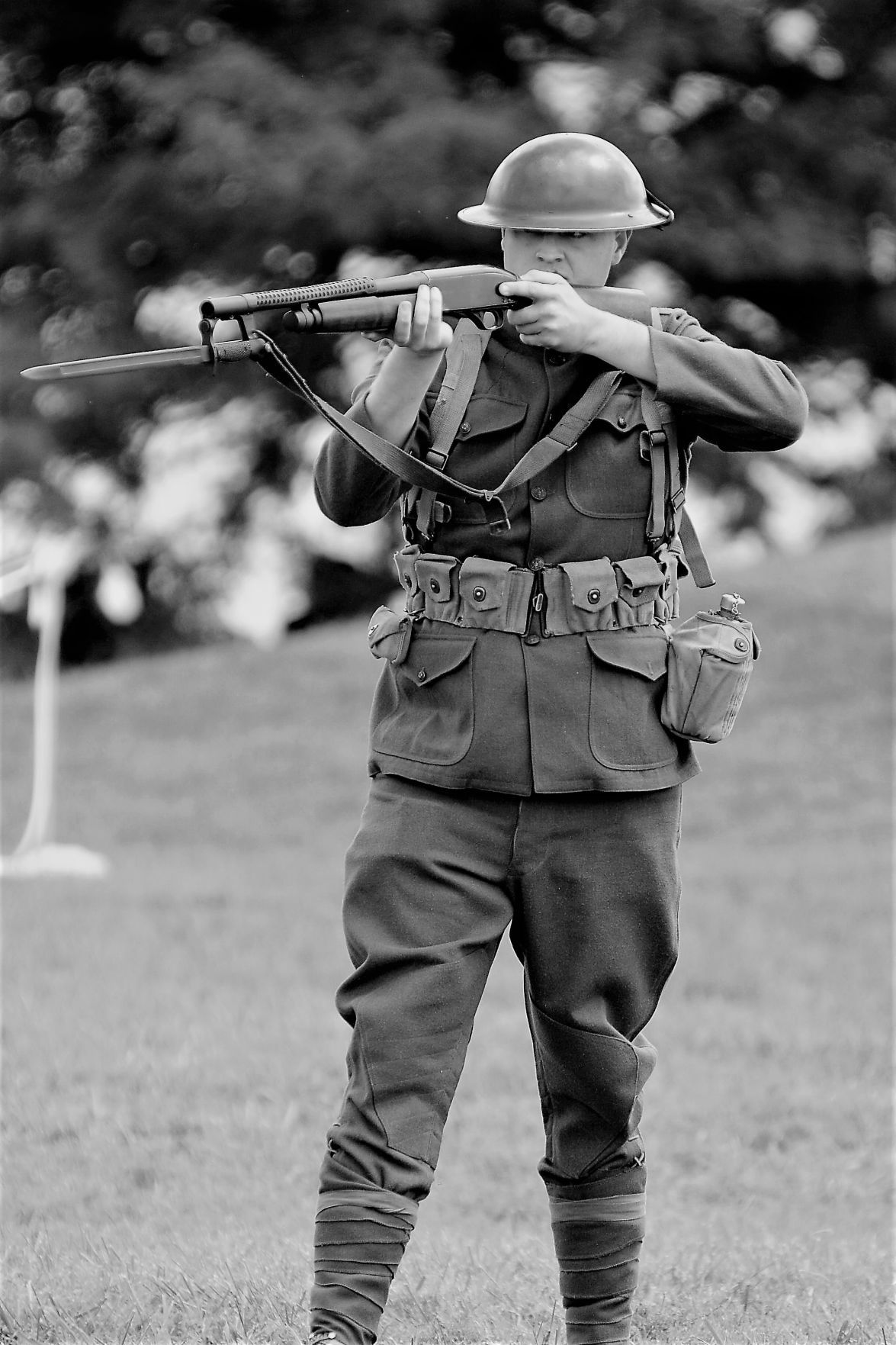 Following on from our coverage of the German sawback bayonet, our banned weapons of war series take us onto another feature of terror warfare during the first world war: the Winchester Model 1897 more infamously known as the trench gun.

In 1897, John Browning revealed the Winchester Model 1897. Originally produced as a tougher, stronger and more improved version of the Winchester 1893, itself an improvement on the early Spencer pump gun, the Model 1897 was identical to its forerunner, except that the receiver was thicker and allowed for use of smokeless powder shells, which were not common at the time.

A year later in 1898, it was thrown into service with the US army who were then fighting the Moro tribesmen in the Philippine-American war. 200 of the weapons were sent to the US army stationed in the Philippines and saw became a popular and practical weapon to use in close combat against the tribesmen who would attack with swords and knives to lethal effect.

The Trench Gun in WW1

It was during WW1 where the weapon gained an infamous reputation. The US had been observing the gruesome trench warfare for three years before getting involved in the first world war and understood that close-range weapons with a lot of firepower were vital in trench raiding warfare. The US military then designed a trench grade Model 1897 which modified the original Model 1897 with a shorter barrel and a steel heat shield over the barrel designed to keep the soldier’s hands off a hot barrel. It was also fitted with a bayonet lug for affixing an M1917 bayonet.

The trench gun in WW1 soon began to rapidly revolutionize trench warfare. Specific trench grade ammunition was provided with the modified weapons with each round holding nine 00 (.33-caliber) buckshot pellets which provided the potential to unleash formidable firepower with each round.

Unlike most modern pump-action shotguns, the Winchester Model 1897 lacked a trigger disconnector. Which meant that it fired each time the action closed with the trigger depressed, making it simple to empty all high powered slugs with rapid speed and ideal for close combat. It soon earned the nickname “trench sweeper” or the ”Trench Broom”.

As well as trench raids, the weapon was also used for a variety of other military operations such as rear area security operations, guarding prisoners of war, ambushes, and urban warfare. Some American soldiers who possessed experience of skeet shooting from back home were armed with Model 1897s and tasked with shooting down enemy hand grenades in mid-air.

France and Britain, who had been in the war since day 1, both utilized double-barreled shotguns in trench warfare weapons during the war. However, they were unable to obtain high-powered ammunition and the reload speed was far too slow for close combat. Thus, the shotgun was not as largely used before the Mold 1897 came along.

Despite its rapid popularity amongst American soldiers during the later years of the war, the Germans naturally didn’t share their enthusiasm for the trench gun slam fire and soon launched a protest against the weapon, branding it a breach of the law of war. A diplomatic protest was delivered to the US government from Germany citing that the weapon caused unnecessary suffering. The US rejected the German protest.

The US rejection of the process angered the Germans, who believed they were being treated with unjust behavior in the war. German forces soon issued threats that any American soldier captured with a trench gun would be tortured and shot. This led to equal threats from the US forces, who threatened the same treatment for any Germans captured with the dreaded flamethrowers of serrated bayonets.

Following the end of hostilities in WW1 in 1918, the Model 1897 was remodeled from the trench model into the riot model and continued to be produced. Between 1897 until 1957, over 1 million of the weapons were produced. In peacetime America, it found new service with US police forces as well as the American Express Company, which began to routinely arm their messengers with them. The riot version did not feature the heat shield, bayonet lug and sling swivels that the trench version did.

The Trench Gun in WW2

Despite their controversial past and almost becoming one of the banned weapons of war, the weapon again made a resurgence in WW2. As the US joined the war in 1941, its stock of military-grade weapons was not fit for the intensity of the fighting that was to come. They did have large stockpiles of the trench grade M1897 however and soon they were being sent into action once again. The first trench guns were deployed with American forces in the Pacific Theatre and soon proved to be ideal for close-quarters fighting against Japanese troops in the jungle and caves. Various weapons manufacturers such as Winchester, Remington, Savage, Stevens, and Ithaca all joined in the war effort and began making M1897s or inspired models. By 1945, over 500,000 trench guns had been purchased by the US military.

Trench guns rarely made it to the Western front due to previous experience between German and US troops, so the guns largely remained in the Pacific campaign throughout the war. The US Marine Corps was the unit most synonymous with the use of the weapon. The M1897 proved very useful in blasting Japanese Army carrier pigeons out of the sky as well as combating Japanese snipers who would utilize the jungle around them by hiding in the undergrowth or in the dense foliage of the high trees. The Japanese troops would also relentlessly launch suicidal attacks behind American lines under the cover of darkness. The trench guns were ideal for taking them down when the time for precision aiming was tight.

If you enjoyed our latest Banned Weapons of War segment, you’ll love our other articles related to the dark side of warfare from centuries past in our military history department! To travel to the trenches of WW1 and other wars, check out the range of adventure tours offered at Soviet Wastelands Tours.