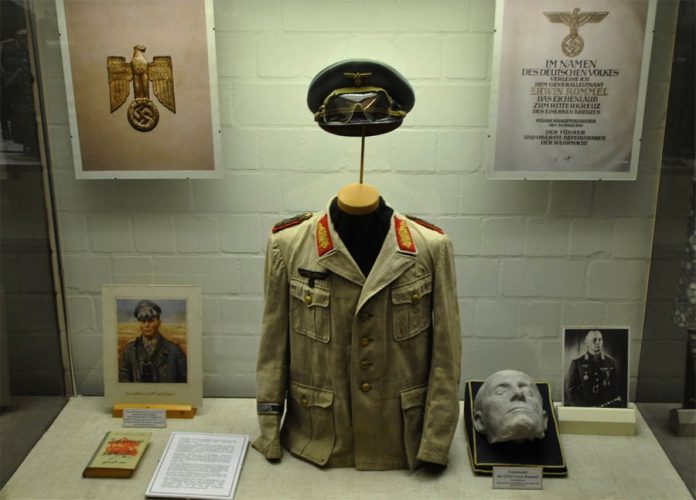 During WW2, a grueling war was fought across the deserts of North Africa between the British 8th Army against the forces for the German Wehrmacht. The German forces stationed in North Africa were known as the Afrika Korps (Deutsches Afrikakorps) and founded by Hitler on the 11th of January 1941 and a month later, he appointed one of his favorite generals to command the Afrika Korps: Field Marshal Erwin Rommel. He would go on to be called ‘the Desert Fox’ and photographs of him in his Desert Fox Commanders Jacket would become iconic images of the African campaign of WW2.

Rommel was born in the German town of Heidenheim in He went to join the military at the age of 18 and despite being rejected by the artillery and the engineers, he soon enlisted as an officer in the infantry before going on to fight in the First World War often taking part in dangerous raids and recon missions in various theatres of the war from France to Romania. He was almost killed multiple times and had a fist-sized bullethole punched through his leg during a bayonet charge against 3 French soldiers and a similar bullet wound on the Romanian Front.

“Where Rommel is, there is the front.”

The Afrika Korp was initially sent to back up the poorly organized Italian Fascist forces who were struggling to defend their recently acquired African colonies from British forces. The Germans went on to fight across the African front until their defeat and subsequent surrender in May 1943. Throughout the campaign, their commander Erwin Romell became a much-respected general by his men and a respected adversary amongst the British.

Throughout the long history of military uniforms throughout the ages, it is argued that the military uniforms of the Wehrmacht and other German military branches are some of the most iconic. Sleek, stylish, and with unique insignia, it has become a highly sought after collector’s item in the post-war years. The German army had various uniforms for the vast array of branches within its military, however, the uniform of the Afrika Korp would go on to become one of the most iconic of them. This was largely due to the fame acquired by the Desert Fox commanders legendary strategies and commanding style throughout the campaign. Romell’s Desert Fox Commanders Jacket soon became a symbol of one of the toughest campaigns fought by the armed forces of Germany during WW2.

WW1 was branded as ‘the war to end all wars.’ In the 1920s and 1930s, many European armies failed to modernise and adapt to the times. Germany wasn’t one of these countries and at the outbreak of the second world war, the German Wehrmacht in particular had been training and modernising for years previous despite the restrictions of the treaty of Versailles. Thus, the German Army of the time was considered to be one of the most advanced and well-equipped military forces on earth. Armed and kitted out with the latest battlefield technology to prepare them for war in all corners of the world.

This image was torn apart following the Nazi invasion of the Soviet Union called Operation Barbarossa. Despite early successes and victory seemingly on the horizon, the Eastern Front soon descended into a bitter, bloodthirsty and miserable fight between millions of men. The Eastern Front soon proved catastrophic for the Wehrmacht as they realized they were ill-equipped to deal with the unforgiving Russian winter. This was not a fate shared by the Desert Fox and his men in the North Afrikan campaign, who found their equipment was well made for the challenging desert environment. Tropical equipment and uniforms were designed through the Institute of Hamburg University who was hired to make sure that the German Army was properly equipped for the environment. An appropriate department for the Eastern Front seemingly wasn’t used.

After German headgear such as the Stahlhelm, Bergmütze and Schirmutz, the German military tunic, known as a Feldbluse, is one of the most recognizable components of the Wehrmacht uniform of WW2. However, the Afrika Korp tunic was different and featured a far more distinctive look as they were often heavily altered in order to provide more practicality for the realities of desert warfare. The best case study of the modified tunic is the one worn by the famed Desert Fox Field Marshall himself.

“We have a very daring and skillful opponent against us, and, may I say across the havoc of war, a great general.”

The Desert Fox Commanders Jacket was based on the standard Wehrmacht tunic and naturally featured the national eagle/swastika but was manufactured out of cotton instead of wool to cope with the harsh heat of the African desert. In contrast to the standard grey or green of the German forces on other fronts, the jacket was olive-colored similar to the standard Afrika Korps vehicle camouflage. It featured an open-neck design, pleated military pockets, an open-neck design, and metal buttons alongside the red and gold generals insignia of a Wehrmacht Field Marshall. On the lower right sleeve of the Desert Fox Commanders Jacket, it featured an Afrika cuff band awarded to all German veterans of the North African campaign.

The Dessert Fox Commanders jacket was complimented by the standard olive and gold peaked cap of a Wehrmacht general, often featuring an additional accessory of dust goggles for the unrelenting dust storms in the deserts of North Africa.

Romell’s North African campaign came to an end when the numerically superior British forces stopped his advance outside the city of El Alamein in Egypt. Running critically low on ammunition, fuel, and tanks, eventually, Rommel fled to neighboring Tunisia before returning to Germany in March of 1943, two months before the German forces in Africa fell to the British which subsequently cleared the path for the Allied invasion of Italy.

In 1944, following the Allied invasion of France in which Rommel had tried to stop in advance but was ignored, the Desert Fox had grown disillusioned with the Nazi regime. As defeat loomed on the horizon and Nazi atrocities grew ever more abhorrent and well known, a team of German Wehrmacht officers hatched a plot to kill Hitler and members of the Nazi high command with a briefcase bomb in Hitler’s bunker at the Wolf’s Lair in Poland. The plot failed and the conspirators were rounded up to be killed. The full extent of Rommel’s role in the plot is not fully known, but it is known that he was friends with prominent members of the plot and spoke to them about Germany’s imminent future without Hitler.

In recognition of his service and to avoid any more damage to already crumbling German morale, Rommel was given the chance to commit honorable suicide and protect his family rather than be brought to trial and shot. The Nazi government then told the German public that Rommel had died as a result of injuries he sustained in France during an Allied air attack on his open-top car following the Normandy invasion. The truth remained hidden until his son, Manfred Rommel, deserted his penal flak battalion and gave himself up to French forces before telling them everything.

Today, the Desert Fox is one of the only Nazi-era generals still honored in modern Germany. Two Bundeswehr military bases and various streets are still named after him. In his hometown of Heidenheim, a monument is dedicated to him that declares him as a ‘Chivalrous and brave victim of Nazi tyranny.’

If you enjoyed this post, you’ll love our other articles related to the dark side of warfare from centuries past in our military history department! To travel to the trenches of the global battlefields and visit the relics other wars, check out the range of adventure tours offered at Soviet Wastelands Tours.