Home Frontline Dispatch Deadly Women, Dirty Laundry, and a Shootout With The IRA 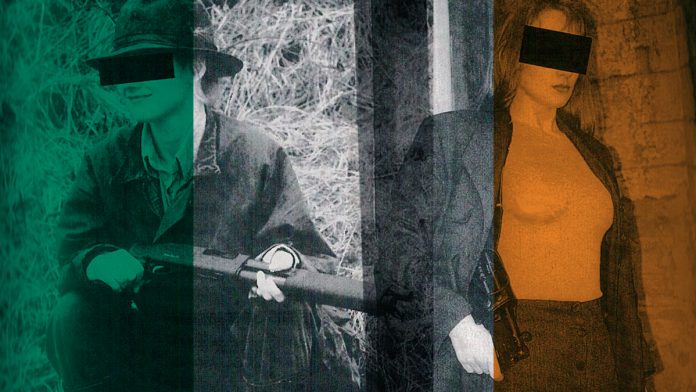 The featured artwork for Deadly Women, Dirty Laundry, and a Shootout With The IRA was made by Olivier Ballou.

The story of the British undercover operative Sara Jane Warke is a story that involves deadly women, an infamous laundromat in Belfast engulfed in a covert operation, and a street shootout that took the life of a British SAS soldier.

The story of Sara-Jane Warke is as unique and dark as the conflict in Northern Ireland itself and is one of the most interesting deadly women episodes in British military history.

During the British campaign in Northern Ireland which was known as Operation Banner, the military contribution to the British intelligence services operating in Northern Ireland consisted of gathering serving soldiers from particularly elite regiments as well as women from the Army, Navy, and Air Force combined in order to carry out covert intelligence-gathering operations.

When it comes to deadly women, Sara Jane Warke is not one you can find a lot of detail out about. Aside from photos of her looking seriously attractive and deadly with pump-action shotguns or concealed guns, we have to rely on witness accounts of those who interacted with her as the majority of her military record is not public.

She was a member of the short-lived Military Reaction Force (MRF) of the British Military. The MRF operated plain-clothed and pulled its members in from elite British Army Regiments such as the Special Air Service (SAS). Many of the unit’s members would go on to join Mi5 and Mi6 of the British Intelligence Services.

What we do know is that Sara Jane was born in the town of Coleraine in Country Derry, Northern Ireland. On operations, she went by the name Kate. Witnesses liked her and she was described as a pretty, ingratiating young woman.

The operation involving the Four Square laundry company is the only one known to the public that she is associated with, but she did take part in many others that are still top secret. Where she is now is a mystery.

The so-called ‘Dirty Laundry Operation’ carried out at the Four Square Laundry in Belfast was one of the most infamous MRF / Mi5 operations during The Troubles in Northern Ireland.

Units like Mi5 and the MRF are tasked with gathering and analyzing intelligence. They were dispatched to Belfast to carry out these tasks on the IRA and other militant republican groups.

The launderette known as Four Square Laundry was located in the heart of Nationalist Belfast. Whilst it functioned as a regular launderette, in reality, it was an audacious undercover operation led by the British intelligence services. The undercover operatives utilized the naturally large Bedford Commer laundry vans to conceal surveillance teams and equipment.

These vans would travel to various Irish Nationalist strongholds in Belfast and offer laundry services at the cheapest prices around, as they certainly weren’t in this to make a profit but were instead gathering vital intelligence in a number of ways.

As the van visited various addresses, the driver and Sara Jane, both of whom were native to Northern Ireland, would converse with the local residents and gather seemingly insignificant information from them.

Later, this would be analyzed closer and used to complete missing leads and intelligence from other operations. As the two undercover agents chatted away, British Intelligence Officers hidden inside the roof of the van in a compartment specially designed as an observation post would gather photographic intelligence of the area in the form of homes, vehicles, and movements of known Irish Republican militants.

The laundry would then be sent to a British Army Headquarters in the town of Lisburn where Mi5 and MRF operatives would analyze the latest laundry lists with old ones. Sudden changes in clothes sizes could signal that there was another person in the house the team was unaware of.

If a woman whose husband was incarcerated or had been killed during the Troubles handed in male clothes to be cleaned this could signal that there was an IRA militant inside the home.

Most importantly, all of the clothes were forensically analyzed for blood, gunpowder, and explosives in an attempt to track insurgents before it was cleaned, neatly folded, and handed back to the customer.

A shootout with the IRA

The IRA uncovered the Four Square Laundry operation through a man named Séamus Wright. On the 5th of February 1972, Wright had been arrested by the British Army and had subsequently disappeared for six months before arriving home unexpectedly.

The IRA swooped on Wright immediately and interrogated him. Wright admitted to being involved with the MRF and offered his services to the IRA as a double agent. He subsequently leaked information about the laundry operation which led to it being compromised.

On the morning of 2nd October in 1972, the Four Square laundry van was carrying out its undercover operation and heading towards a Nationalist stronghold of Belfast known as the Twinbrook estate. Sara-Jane Warke left the van and visited a house to collect laundry from a female customer. The two began small talk whilst the van waited nearby with the driver, a SAS soldier named Stuart Telford, at the wheel.

Suddenly, the van was ambushed by IRA insurgents who sprayed it with assault rifle rounds. Stuart Telford was killed instantly. The IRA claims that two British Intelligence Officers who were positions in the hidden compartment under the roof were also killed, but this has never been proven.

As Sara-Jane turned to face the heavily armed insurgents, she too was shot. But in true deadly women fashion, rather than go down without a fight she drew her concealed 9mm Browning hi-power handgun and engaged the IRA singlehandedly until the gunmen were forced to retreat to a waiting car and flee the scene.

On the evening of the same day, Séamus Wright who leaked the information on the British operation was abducted by the IRA and murdered with a bullet to the head at a remote bog in Country Meath. For decades he was a statistic of one of the many disappeared persons of the conflict in Northern Ireland. In 2015 his body was recovered in bogland and laid to rest.

According to Alanmalcher.com, the medal roll in the British newspaper the Gazette dated 18 September 1973 features W/439979 Lance Corporal Sara Jane Wake of the Women’s Royal Army Corp and confirmation of her Military Medal for Bravery. Naturally, Northern Ireland and the Military Reaction Force she was serving with is not mentioned.

Sara-Jane Warke was the first member of WRAC to receive the military decoration making her one of the most deadly women in modern British military history. A spokesperson for the Ministry of Defence said the medal was given for other work she had done in Northern Ireland, as well as the laundry operation. The MoD refused, for security reasons, to allow Sara-Jane Warke to be interviewed.