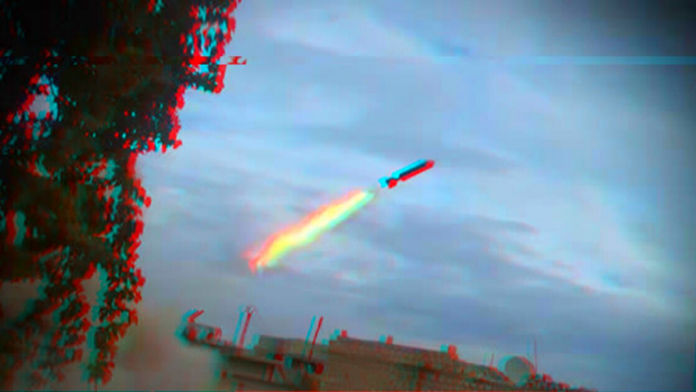 This latest addition to our combat footage section shows one of the latest terrifying weapons on the modern battlefield known as an Elephant Rocket, named after the Elephant roar type of noise they make in flight, in action. As Iraqi forces of the E.R.D maintain a rooftop position in what looks to be Mosul, the elephant rocket fired by ISIS militants flies over their heads and narrowly misses their position before detonating in a huge explosion nearby.

What is an Elephant Rocket?

Elephant rockets first appeared in the Syrian Civil War when they were used by forces loyal to Bashar al-Assad. The regime was already widely condemned for its use of barrel bombs during the conflict. The weapon is largely improvised and can be made by a variety of terror groups as well as government forces, hence why it has been introduced during the conflict in Iraq following the ISIS rampage that swept across the country.

The rockets are named after the distinctive Elephant roar type of noise they make when they are launched. They are made by attaching rocket motors to significantly larger bombs. This process increases their destructive power but massively reduces the accuracy as can be seen in the near-miss of the rocket in the video.

In 2015, The Syrian government was accused of firing elephant rockets on the Damascus suburb of Douma. This led to the death of over 36 people including many children, according to al Jazeera.

Elephant rockets have also been used by Iranian-backed militias to attack US military installations in Iraq. In 2011, the Combat Outpost Shocker was hit by a few of these lethal devices killing 3 soldiers, wounding several others, and severely damaging the headquarters building of the outpost. It has since been used by irregular and regular forces across the Middle East and as far as Afghanistan.