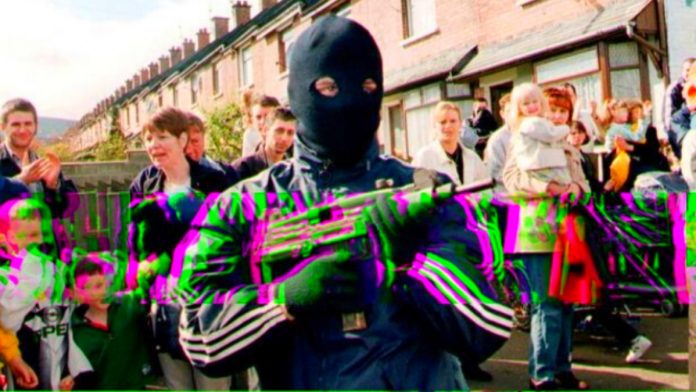 The following video is an iconic piece of footage from the height of The Troubles in Northern Ireland. It took place on the 1st of April 1997 at an Easter Rally in an IRA stronghold in Belfast. It shows two Adidas tracksuit wearing IRA gunmen appear in the crowd brandishing a Romanian made Kalashnikov and an Uzi submachine gun.

Reaper Feed visited Northern Ireland last year and hung out with former IRA and Loyalist commanders to explore the conflict in-depth, but the Adidas tracksuit wearing gunmen in footage provides a fascinating insight into the niche supply lines that existed in the Troubles in Northern Ireland. Let’s take a look at how the weapons came into Ireland and where the tracksuits came from.

Where does an IRA Gunman go shopping for an Adidas tracksuit?

Unsurprisingly, the Adidas tracksuit modelled by the IRA militants in the video were likely not bought in the conventional way. Instead, they can more than likely trace their origins back to one of the many truck robberies that occurred during the 1990s.

During the 1990s, the hijacking of trucks carrying cargo between the Republic of Ireland and Northern Ireland was happening at least once a month. It was common for IRA militants to dress a local gardai police officers to pull trucks over being pulling out automatic weapons and carrying out a robbery.

Common items stolen in such robberies were cigarettes, furniture, drink, chickens, turkeys, electrical goods, and, brand clothing such as Adidas tracksuits. The hijacking of trucks was an important source of revenue for the Irish Republican Army. In 1993, it was estimated that the total amount of goods stolen by the IRA had a black market value of over £1 million.

The truck driver was held for two hours, then put into a car before being released between Dublin and the border. He was taken to a pub, given a drink, and warned not to move because the gang would be watching the pub.

Local sources told us that, following a successful robbery of a truck transporting Adidas sportswear in the mid-1990s, influential figures in the Republican areas of Belfast were suddenly all kitted out in the same type of Adidas tracksuit being worn by the men in the video.

A Romanian AK and the Libyan connection

One of the gunmen in the footage is carrying a Kalashnikov manufactured in Communist Romania. Officially known as the Pistol Mitralieră model 1963/1965 or MD. 63. Like the Bulgarian variant of the Kalashnikov (which we got to fire on our recent road trip), this was produced under license by Romania during the Cold War as was the standard of all Warsaw Pact countries.

After switching sides from the Nazis to the Communists in the latter days of WW2, the Romanian military was using Soviet-supplied PPSh-41 and imported AK-47 rifles as standard weapons. In the early 1960s, they began to produce their own standard issue weapon following the Soviet demand for Warsaw Pact nations to do so in order to defend themselves in the then rapidly escalating Cold War.

Thus, the Pistol Mitralieră model 1963 was born. It was essentially a copy of the AKM but with a characteristic forward-pointing front handgrip molded into the lower handguard that was nicknamed ”the donkey dong”. The Pistol Mitralieră model 1965 that came two years later featured a rear-pointing front handgrip that allowed an under folding stock to be successfully retracted.

Interestingly, the IRA did not obtain these weapons directly from the Socialist Republic of Romania. Instead, they largely came from the regime of Muammar Gadaffi who was infamously one of the main arms suppliers to the IRA and did so to undermine the rule of the United Kingdom in a classic example of a proxy war.

The leader of Communist Romania, Nicolae Ceausescu, was the first head of state from a Warsaw Pact country to visit Colonel Muammar el‐Qaddafi, who was anti-communist and until his meeting with Ceausescu had avoided all contact with the Communist bloc. Diplomatic relations were established and the flow of Romanian weapons in Libya began.

Gadaffi, a sympathizer of the Republican cause, began supplying arms to the Irish Republican Army in the early 1970s following visits to Libya by a prominent figure in the Irish Republican movement named Joe Cahill. When the intelligence services of the Republic of Ireland received a tip-off about a ship called Claudia, they began monitoring it. On the 28th of March, 1973, three Irish navy ships intercepted the Claudia in Irish territorial waters.

Onboard, the Irish navy discovered over five tonnes of Libyan arms and ammunition, which they promptly seized. The weapons shipment included 250 small arms, 240 rifles, anti-tank mines, and various other explosives. Despite this, it’s believed that three other shipments of similar scale successfully reached the IRA during the same period. It’s possible that Claudia was a sacrificial dummy ship.

By the 1980s, weapons supplies from Gaddafi’s Libya had gone to the next level. Between 1985 and 1986, the IRA successfully received four weapons shipments that contained enough modern arms to equip more than two infantry battalions.

The intensity of these new shipments was said to be in response to the British Government’s support for the US Air Force’s bombing attacks on Libya in 1986, which were in retaliation for the 1986 bombing of the LaBelle discotheque in Berlin.

The USAF planes involved in the bombings had taken off from British bases on 14 April 1986, and Libya reportedly suffered 60 casualties in the attack. These shipments naturally led to a major escalation in the conflict in Northern Ireland.

*Disclaimer – This article is not intended to glorify the actions of the IRA or Gadaffi’s Libya. It is simply an insight into a niche aspect of the horrific conflict in Northern Ireland.*