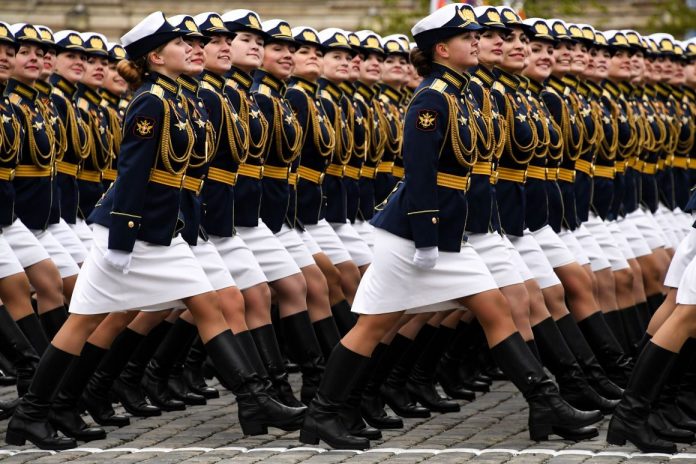 In the Russian military, it’s estimated that there are up to 160,000 serving female soldiers filling roles to engage the nations enemies. Women, therefore, make up 10% of the Russian Armed Forces. Unlike for Russian men, conscription does not apply to Russian women and they are free to join the military of their own volition. However, only the most elite Russian female soldiers attend a prestigious girls military school known as the Boarding School for Girls of the Ministry of Defense of Russia.

Whilst high-class private education institutions are more closely associated with class-based societies such as the United Kingdom, Russia is moving on from its decades of Socialist heritage through the establishment of various prestigious institutions for educating the country’s youth.

The girls military school is one of these prestigious institutions and was established in the Russian capital of Moscow back in 2008, the same year Russian and NATO relations began to deteriorate when the largest country on earth went to war with Georgia in the Russo-Georgian War. It was visited by the wife of Medvedev, then the president of Russia. Medvedev wife was said to be very enthusiastic about the school.

Every year this prestigious girls military school only accepts 120 girls over the age of eleven from an enormous population. The candidates are picked on their parents’ merits and their father must have earned the prestigious Hero of the Russian Federation medal achieved through either completing 20 years of exemplary military service or having been killed in action.

However, having exemplary military parents alone doesn’t guarantee entry and the girls must undergo extensive exams that are equal to the best schools in the Russian Federation. The exams focus on physical fitness, mathematics, Russian and foreign languages. Every single place in the university is fought over by up to 40 candidates.

If they’re lucky enough to be accepted, the students of the girls military school then make their new home at the school and reside on campus for most of the year only returning home for holidays. Their accommodation and food are all covered by the Russian state.

– A student at the girls military school.

Despite a busy curriculum, the school is home to a host of over 50 clubs allowing the students to indulge in music, journalism, horse riding, sports, holistic fitness, and theatre among other hobbies. Every year, a selection of students is hand-picked to be sent abroad to undertake studies in countries such as the UK, France, and Germany, where they develop their ability to speak the world’s language for business and cultural skills.

After completion of studies at the prestigious girls military school, the students go on to follow a variety of careers. Some follow family tradition and go on to become doctors of interpreters in the Russian military, but others choose civilian careers such as life counseling, dance, design, or accounting.

For similar articles covering the Russian speaking world, check out the Reaper Feed Russia Department for an eye on the East!