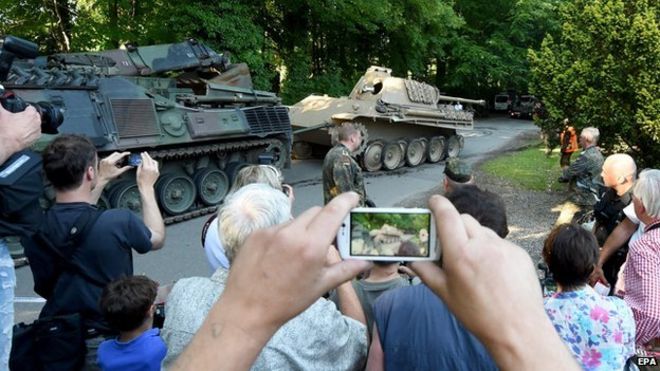 It’s been 75 years since the Second World War ended. As a kid in the UK, I remembered hearing stories of people who had gone to Germany in the early 1990s to help rebuild East Germany following the fall of the Berlin Wall. Many of them came back with treasure troves of WW2 loot that had been hidden behind the Berlin Wall for decades. Today most of these relics have been found and sold for market prices due to the amount of information available on the internet. However, in the region of Kiel local police were in for a surprise when they found a 45-ton WW2 Panther tank in the basement of a German pensioner.

German police were led to a property in the small town of Kitzeberg just outside of Kiel in Northern Germany as they were pursuing a tip-off gained in an investigation into Nazi-era art that was being sold on the black market. The month before they had seized a set of gigantic bronze horses that once welcomed visitors into the Reich Chancellery in Berlin.

During the inspection of the pensioner’s house, the police discovered a plethora of WW2 military weapons and equipment including an 88mm Nazi flak gun and a Kriegsmarine U-boat torpedo. It took over 20 German soldiers 9 hours to remove the collection. But it was in the basement where the most shocking discovery was made: a 45-ton Panther tank formerly belonging to the German war machine!

The collection was seized and photographers snapped the WW2 tank being hauled away by military engineers of the German Bundeswehr. Experts were called in and deemed that the tank was not properly decommissioned, not to mention registered, so the 78-year-old owner was subsequently arrested before being released on bail.

Whilst the discovery of the rare WW2 tank in a pensioners basement came as a shock to the wider German public, it soon became clear that the owner’s neighbors were well aware of the war machine. Various other elderly locals spoke to the press to talk affectionately about the WW2 tank and one man claimed that the owner of the Panther tank used it during a harsh winter in the late 1970s. He got the tank working and helped plow the snow from the local roads to help his neighbors.

The Panther tank was a feature of the Second World War from 1943 to 1945. Equipped with the same Maybach V12 petrol engine as the feared Tiger I tank, the Panther tank had more advantages than the Tiger due to featuring more effective frontal hull armour up to 100mm thick and a better gun penetration. The Panther was also faster due to being lighter than the Tiger tank and could traverse rough terrain better as a result.

It was well known, at least to all the older Kitzebergers, that he had a tank!

It’s still unclear what happened to the owner of the tank or whether he got his collection back, the last report on the case was that German prosecutors were trying to figure out if the owner had breached Germany’s War Weapons Control Act, which requires military weaponry to be licensed.

It’s still a question as to where the hell the man got the Panther tank from in the first place. But one thing is certain, I am truly jealous of his collection.

If you enjoyed this article, be sure to check out more of our coverage of WW2 history in our military history department.