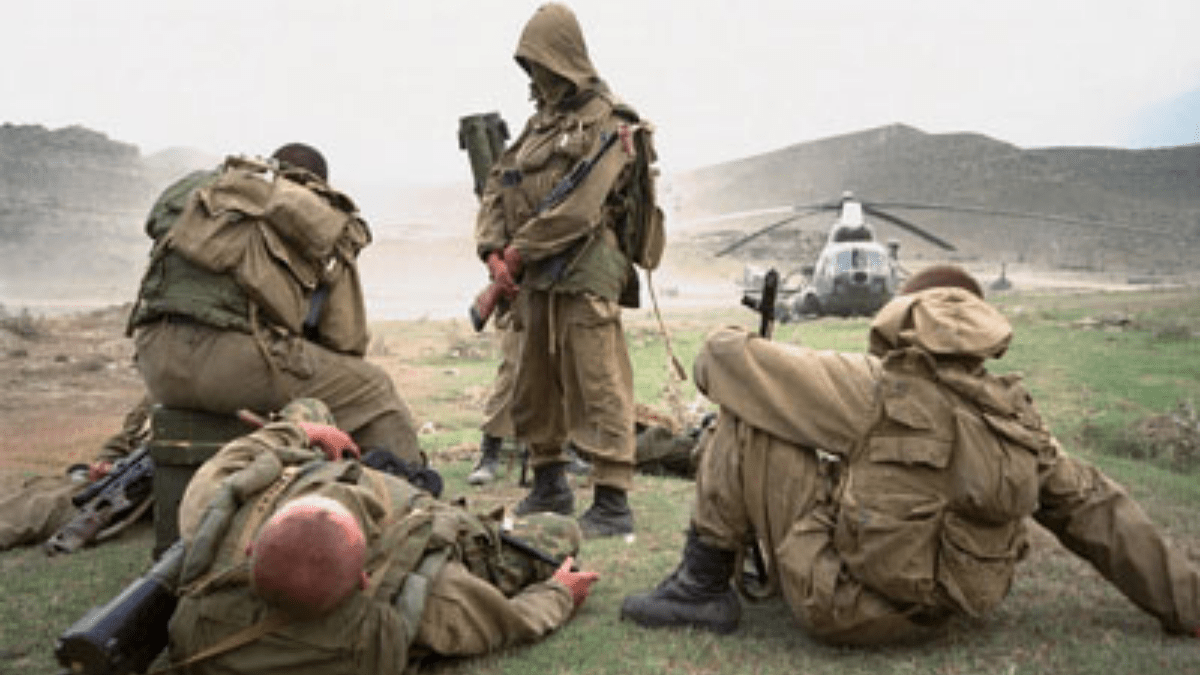 From sky blue French uniforms in WW1 to the DPM worn by the British in the Falklands War. Throughout the history of modern warfare, various armies have worn various iconic costumes and uniforms in combat. The Russian military is no exception. Introducing the Gorka suit. No, we’re not talking about Sebastian Gorka or his wife, we mean the Russian Army costume that was born in the Soviet-Afghan War and has persevered through multiple conflicts right up to the ongoing Syrian Civil War and beyond.

What is a Gorka suit?

When the Soviet-Afghan War began in 1979, the unfolding combat between Soviet troops and Mujahideen fighters in the harsh, unforgiving mountains of Afghanistan soon made it clear that a new form of military clothing was required. In 1981, the Soviets began to modify mountaineering clothes from the civilian sector and issue them to soldiers of the Soviet Army. This model was known as Gorka 1.

Naturally, the first units to be outfitted with the Gorka 1 tactical suit were the Soviet troops specializing in Mountain warfare. Constructed entirely from canvas, the Gorka suit soon proved popular thanks to its resilience against the rough terrain of the mountains and its wind stopping capabilities.

In 1989, the catastrophic Soviet-Afghan War was over and a few years later so was the Soviet Union. The Soviet Gorka suit, however, was far from retirement. From 1994 onwards, the Southern Frontier of the Russian Federation was engulfed in the almost perpetual, bloodthirsty civil war in the mountainous republics of Chechnya and Dagestan.

These conflicts saw the Gorka come back into action as a large majority of combat in Chechnya and Dagestan consisted of counter-insurgency operations in the mighty peaks of the Caucasus mountains. These wars saw major advancements of the Gorka 1 and Russian camo and spawned multiple variants of the iconic Russian Army costume.

In the newly capitalist Russian, various companies began to manufacture their own variants of the Gorka as well as other Russian military equipment for sale. Today, the market is full of Gorka variants made by brands such as SSO/SPOSN, BARS, Viking, Blok-Post, and ANA. On sites like Grey Shop, the two-toned or Russian camo variants are the most commonly seen. In the North Caucasus in particular, the Russian suits are popular with the civilian market especially for fishermen, hunters, or those carrying out heavy manual work.

Although the conflicts in Chechnya and Dagestan have thankfully quelled into a low-level insurgency, the Gorka suit has continued to thrive in ongoing conflicts far beyond the borders of the Russian Federation such as in the Middle East and North Africa. Likely due to men with Russian last names and a dark interest in international travel.

In Syria, there have been countless examples of the Gorka being worn by Jihadist groups before Russian forces moved into the country. The popularity of the Gorka suits was brought to the Syrian Civil War by Jihadist foreign fighters from the North Caucasus who were well versed in the benefits of fighting in Gorka suits. Interestingly, the Gorka turned out to be very well suited to combat in Syria.

The most common color scheme of a Russian Gorka suit is brown and tan which not only blends in well with the typical urban terrain of Syria but equally provides concealment in the wooded areas and dusty plains of Syria also. It also acts as a more than an adequate form of cold-weather gear in the winter months in Syria, where temperatures can drop below freezing. Most importantly, it’s not that expensive due to the various off-brand variants available. Thus, many fighters on a low budget can afford to kit themselves out with proper gear in the form of a Gorka suit.

In the Syrian province of Idlib, which is largely controlled by the Salafi Jihadist Group Hayat Tahrir Al-Sham (HTS), the Gorka is particularly prominent due to the large number of North Caucasus fighters based there. To supply the demand, countless off-brand variants of the suit are created locally in Idlib or sourced over the border in Turkey before being smuggled into the province. Some are even styled in the form of an Islamic robe as seen being worn by this HTS fighter in Idlib.

In Libya, which has been engulfed in endless civil war since 2011, the Gorka has become a fairly significant feature also. However, the cultural importation of the Russian Gorka uniform into Libya was not brought into the country by Jihadist foreign fighters from the North Caucasus, but instead by Russian mercenaries aligned to the Wagner Group.

In May of 2020, Oded Berkowitz published a photo on Twitter that purportedly showed Russian fighters withdrawing from positions south of the Libyan capital of Tripoli. One of them is wearing a distinctive Russian military surplus in the form of a Gorka 4 suit.

In conclusion, the Russian Gorka suit is an incredibly resourceful piece of equipment favored by friend and foe alike on both sides of the frontline. From its origins in the Soviet-Afghan War, it has gone on to become modernized and feature in a plethora of global conflicts around the world. It has also had a dark positive economic impact in areas affected by war as local business savvy tradesmen see the chance to make some cash by producing custom-made Gorka suits for any armed fighters who want to buy.