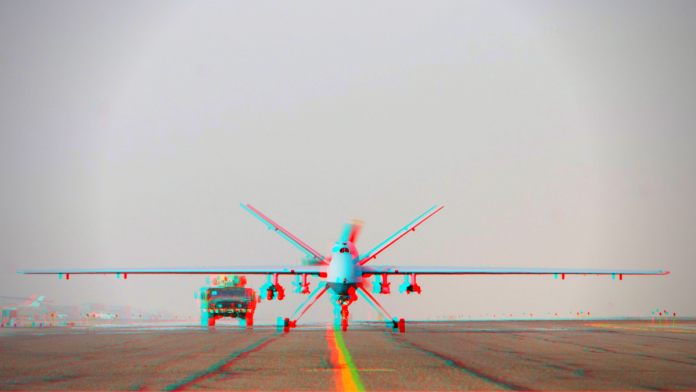 The Reaper Drone. Nicknamed ”The Devils Eyes” by those it stalks, it’s also the inspiration for the name of our site. The first time I saw a Reaper Drone was at the SOFEX Arms Expo in Amman, Jordan, back in 2018. However, it wasn’t a Reaper Drone, it was a Chinese knock off. The suited man with a lapel badge of the Chinese flag was not keen on being photographed alongside the aircraft and swiftly covered his face and moved out of the way. Due to not belonging to a company known for doing business with the Chinese, as I approached him to ask more about the drone, he wasn’t keen on talking about it either. We still got a selfie with it though:

Luckily, the information is largely available online. Which brings me to another point: during my travels around the world, I’ve fallen under suspicion and even been arrested for photographing things like Soviet tanks and well known military aircraft. The specifications, general stockpile numbers, and locations can all be found through basic open source intelligence (OPSINT) techniques. But enough about contradictory behaviour in volatile states, in this article, we’re going to look at the U.S. Predator Drone and the lowdown on it’s Chinese rival, or is it?

The MQ-9 Reaper drone is an unmanned aerial vehicle (UAV) and is manufactured by the U.S. Defence corporation General Atomics. It saw its first flight in 2001 and was introduced to the global defence market in 2007. The Reaper drone is capable of remotely controlled or autonomous flight operations and was the first hunter-killer class of UAV that was designed to carry out reconnaissance at high altitudes for prolonged periods of time.

In comparison to its predecessor, the MQ-1 Predator Drone, the MQ-9 Reaper Drone is bigger and more capable, despite carrying considerably more weight than its older brother. The MQ-9 Reaper Drone is able to carry 15 times more ordnance payload and cruise at three times the speed of the MQ-1. Both models can be piloted using the same ground control stations (GCS). Today in the U.S. the Reaper Drone is used by the Navy, the CIA, Border Patrol, and NASA. It also provides Reaper overwatch in the service of various countries around the world from the United Kingdom and Germany to India and the Dominican Republic.

The Chinese rip off Reaper Drone

Some people have called me unfair for calling the Chinese Reaper Drone a rip-off of the Reaper drone technology and Reaper software. Well, it is. of 2001 saw the Hainan incident take place which involved a US Navy EP-3E ARIES-II signals intelligence aircraft being forced by a PLAAF J-8 aircraft to land on Hainan island’s Lingshui airport following a mid-air collision. The crew was returned to Washington D.C. whilst the plane was held by the Chinese for just enough time to strip and examine the aircraft’s equipment which included cryptographic keys, signals intelligence manuals, and information on the emitter parameters for U.S.-allied radar systems worldwide. All of which is believed to have significantly contributed to Chinese Reaper Drone technology.

“Through superb airmanship and teamwork, 24 crew members and an $80 million aircraft were saved,” the report states, adding, “The crew acquitted themselves well while detained. Conversely, sensitive COMINT equipment, large volumes of technical data, and SIGINT policy directives were compromised.”

In 2011, the Chinese military drone industry gained another boost following the incident in the city of Kashmar, Iran. A U.S. RQ-170 Sentinel UAV was brought down near the city intact by the Iranian government through a cyber warfare unit. Not only is Iran believed to have produced drones copied from the captured RQ-170, but it’s also accepted that the design of the drone was sold to China to advance their drone technology.

Thus, the CASC Rainbow range of Reaper Drones was created by the state-owned China Aerospace Science and Technology Corporation. The CASC rainbow looks naturally very similar to the MQ-9 Reaper, but the many variants are often difficult to distinguish. However, the most prominent t difference that can be seen is the lack of lower ventral fins on the CASC Rainbow that are a feature of the MQ-9 Reaper Drone.

The CH-4B specifications state that is can carry up to 770 pounds of munitions, including the Blue Arrow 7 laser-guided air-to-surface missile, TG-100 laser, inertial or GPS-guided bombs, and the HJ-10 anti-tank missile. It also has a fairly impressive 14 hour mission endurance window.

How does the Chinese Reaper Drone perform?

To explore the performance of the CASC Rainbow we’re going to look at three case studies that took us from Algeria to Jordan. It seems that not only does CASC have a reputation for dodging the provision of spare parts and after-sales service for their drones, they also call their dissatisfied clients ”corrupt”.

When the Chinese announced the release of their new range of drones in 2016, many predicted that China could corner the global market in military drones. At first, that seemed true as China began to supply drones to numerous countries such as Algeria, Nigeria, Jordan, Zambia, Iraq, Saudi Arabia, Ethiopia, Turkmenistan, the United Arab Emirates, and Pakistan. The reason for the initial success was due to China not having the same red tape surrounding drone sales that the U.S. does. However, this initial success soon stalled as a result of the performance of the drone.

One of the first countries to express interest in the CASC drones was Algeria after seeing them on display at an airshow in the Chinese city of Zhuhai back in 2012. A year later, trials of the drones began at Algeria’s Tamanrasset airbase. However, it didn’t take long for problems to arise. Open-source intelligence shows that a number of these drones crashed. The Chinese claimed the problems were own to corruption. The Algerians said there were various control issues with the Chinese made drones, particularly during landing.

One of the most high profile buyers of Chinese drones was the country where I first saw one with my own eyes: Jordan. However, Jordan soon began to raise a number of complaints about the performance of the drones and after just two years of service, Jordan made the decision to get rid of their entire fleet of Chinese made drones at an international auction. Jordan declined to comment on the exact problems surrounding the drone but simply stated that they weren’t happy.

Nigeria was also a buyer of Chinese drones. It’s believed the purchase of the aircraft was to assist them in their fight against Boko Haram insurgents in the North of Nigeria. In January 2015, a CH-3 drone crashed in the Mafa District of Borno Province in the north of Nigeria. The drone was carrying two anti-tank missiles which remained intact. The crash site was located in a Boko Haram hotbed, so it’s widely accepted that the crashed CH-3 reconnaissance and fire support missions for the Nigerians in counter-terrorism operations. It appears the drone crash-landed due to mechanical or control difficulties.

Drones for Sale – Marketing and Desperation

The Chinese Reaper Drone may not match up to the performance of the U.S. made Reaper Drone. However, it’s all about how you market your product.

China’s marketing campaign surrounding its drone, particularly the CH-4, has been pretty full-on. Unlike the US, China never signed the international Arms Trade Treaty, which means it has fewer restrictions on the sale of drone technology. The US has placed a large focus on maintaining its drone advantage by limiting sales to certain countries. Where the US has refused sales, China moves in and supplies drones to anybody with the cash to buy them. According to Middle East Eye, a U.S. made Reaper Drone can cost up to $30 million apiece. In stark contrast, some Chinese drones with armed capability sell for as little as $1m.

The drone contracts and agreements made between China and various countries are said to be more than dubious. China is said to target countries that desperately need drone fleets and have no chance of buying the U.S. made Reaper Drones. It’s reported that when agreements are signed for a certain variant of Rainbow Drone, China instead delivers a lower quality version with various changes. The desperate buyer then has no choice but to accept since the requirements are urgent. A prime example of this was Algeria, who purchased Chinese drones due to the then worsening border situation with neighboring Mali, Niger, and Libya between 2012 and 2014.

In conclusion, the moral of this article is: you get what you pay for. The Reaper Drone produced by General Atomics has stood the test of time since it was introduced in 2007. It’s found a place for itself amongst the most prestigious military forces on earth in a variety of roles from counter-terrorism to anti-narcotics. The CASC Rainbow on the other hand, despite making a smart move with the ease of sale through a no questions asked position, hasn’t impressed countries with its performance.